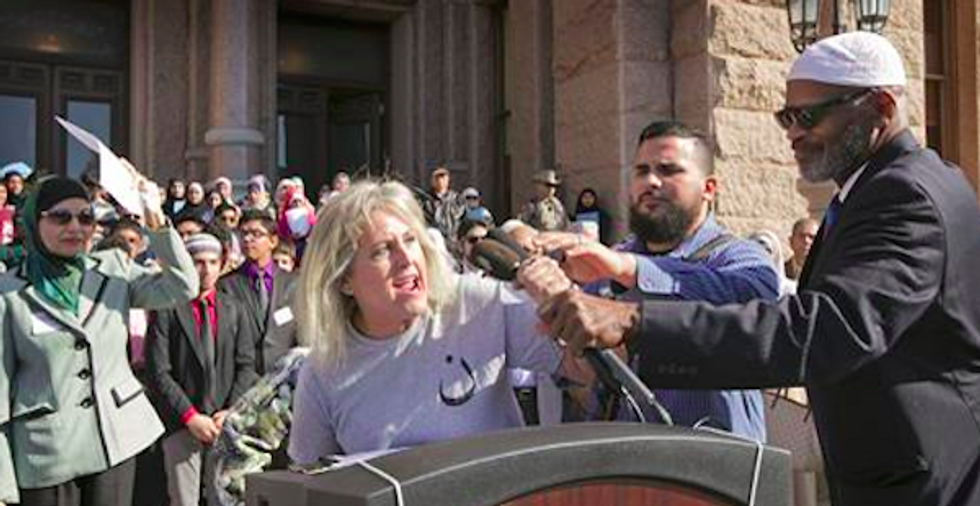 On Thursday, when some Texas Muslims tried to pass as Texas Muslims by holding their creeping Sharia annual event, code-named Texas Muslim Capitol Day, some real patriots were there to scream at them and tell them they are not really Texican, and they are not really Americanian, and go home and be Muslim somewhere else. Like this real nice lady, Christine Weick, who grabbed the microphone to preach The Good Word About How Muslims Are Bad:

I proclaim in the name of the lord Jesus Christ over the capitol of Texas: I stand against Islam! And the false prophet Muhammad! Islam will never dominate the United States, and by the grace of God, it will not dominate Texas.

Then she walked away, with some nice police officers following her, while she shouted "Jesus Christ is the lord and savior!" (in case you'd missed it the first time) and then some other incoherent shouty-ness and then: "Muhammad is dead!" As is Jesus, we might point out. Ahem.

If that shouting sounds vaguely familiar, it should. Christine Weick is the totally not insane lady who crashed a prayer service at the National Cathedral in November to testify that Jesus did not die on the cross just so Muslims could sit in his National Cathedral! And, as we learned, she also has some Really Neat Ideas about how Monster energy drinks are Satan's juice because the "M" is shaped a certain way, which is related to the Hebrew alphabet, which sort of looks like a "666," plus also the way the "o" in "Monster" appears on the can, plus the name of the company, plus some other things, and no, she does not seem to be joking about this.

So naturally she was in Texas to do her thing -- now that she's living in her SUV full-time, by choice, so she can easily cruise around America to scream at Muslims wherever they might be hiding in plain sight. She's not the only one who had a problem with Muslims trying to take over Texas by admiring its capitol. State Rep. Molly White, elected by the wise voters of Texas to make laws for them, demanded on Facebook, like a serious legislator, that all Muslims everywhere apologize for terrorism or else they can just suck on her Israeli flag. Texans of a certain persuasion (the bigoted kind) do not care for Muslims, no sir, and thank American Jesus they have a friend in Rep. White.

And let us not forget the stirring display of southern hospitality in Garland, Texas, just a couple weeks ago, when some Muslims held a conference to denounce Islamic terror, just like Real Americans are always telling them to do. And some Real Americans showed up and told them to shut up, go home, the First Amendment doesn't apply to them, praise Jesus!

Texas, man, it's a hell of a drug. Almost as bad as energy drinks.

[Big h/t to Wonket operative "Eric," if that is his real name.]