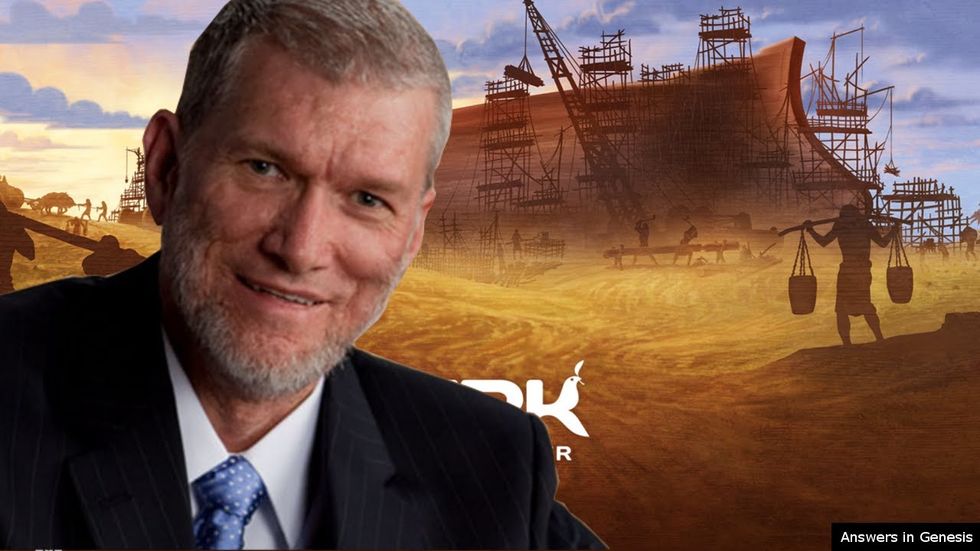 This past Friday, the Washington Post ran a dinky little article about Creationist Ken Ham and his "Ark Encounter" park -- you know, the one that got $18 million in tax breaks to build a full-on replica of Noah's Ark, so geniuses can go there and see how the whole Great Flood thing in the Bible was for real and totally not a myth or anything. And that dinky little article got FACT CHECKED by Ken Ham, who -- in this instance and this instance only -- was actually the one who was right. Granted, it was about his own opinion on the subject, but still. A first is a first.

You see, the article's headline was "Now there’s a theory that dinosaurs were wiped out in Noah’s flood." A theory which, oddly, was never even discussed in the article itself, which primarily focused on the Ark Encounter itself and some of the other weird things that young earth creationists believe.

And it's a dumb theory! But, as Ken Ham pointed out on the Twitter machine, it is not Ken Ham's Dumb Theory.

You see, Ken Ham believes that Noah took the dinosaurs on the Ark with him, and that they went extinct after that.

According to Ham, God told Noah to bring two of every land animal on the boat with him, and thus, dinosaurs would have been included in this. To say otherwise, essentially, would be to suggest that Noah fucked up and totally blanked on the dinosaurs, and then they all got dead 'cause of him. Which is not a thing Ken Ham would ever believe.

He also believes that getting them on said ark was not actually that big a deal to begin with, because all of them weren't that big anyway, and for those that were super big, he just brought baby or teenager dinosaurs. Their extinction, he claims, was not Noah's fault for being forgetful, but rather Eve's fault for eating an apple and thus bringing death and extinction upon the world.

Dinosaurs being wiped out in the flood may seem just as likely as Noah bringing all of the dinosaurs with him on the Ark, and it may seem like a "six of one, half a dozen of the other" situation, but it's still important to get the "facts" right. Because no one should ever, ever, be fact checked by Ken Ham.