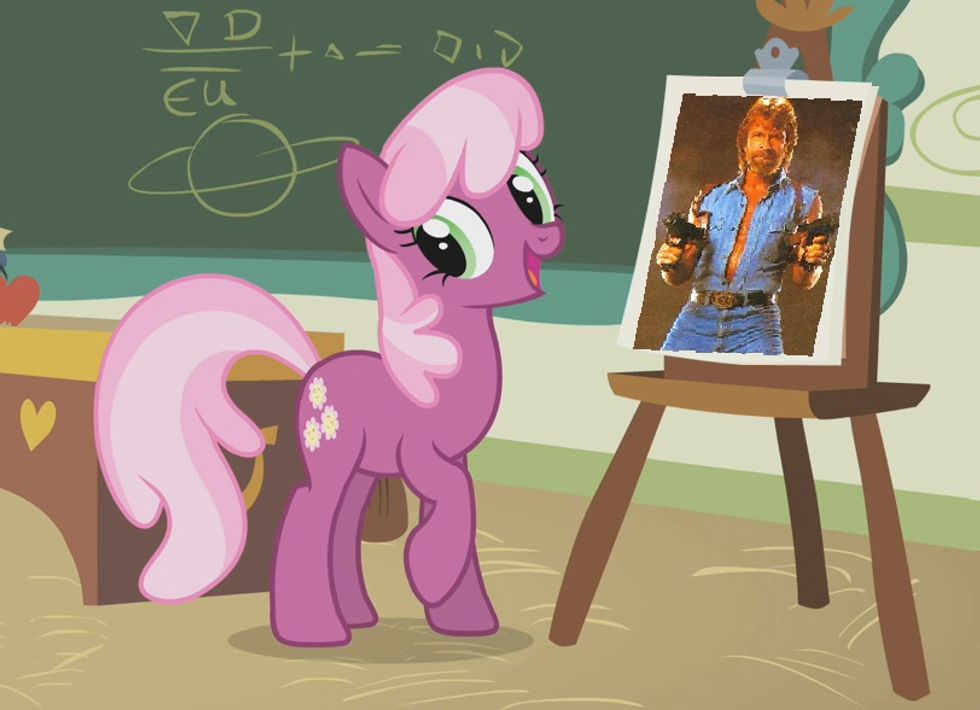 Remember how last week we all got a little teary-eyed at the courage ofMalala Yousafzai, who survived being shot in the head last fall by extremists who don't want Pakistani girls to go to school, and who addressed the United Nations last week and talked about the importance of education, and its power to defeat extremism? Pretty inspiring, huh? Well, as they say, you know who else found Malala inspiring? Chuck Norris. Action movie star, creationist, and content producer for the internet's largest repository of idiot conspiracy theories, WND. Chuck Norris admires Malala for her stand for education. To her credit, Malala Yousafzai didn't even cringe at the thought.

This is Chuck Norris, the guy who thinks schools aren't doing enough to make kids hate gays. The guy who really truly believes that evolution is "not the way we got here" and that the theory of evolution causes school shootings by "teach[ing] our children they are nothing more than glorified apes." The guy who thinks Bible study belongs in all schools. The guy who calls public schools and universities "progressive indoctrination camps." The guy who thinks immodest women are "playing with fire." The guy who likes science so much that he believes vaccines cause autism but that global warming is a hoax designed to usher in "Obama's One World Order." The paragon of intellectual rigor who used to plagiarize his columns from his "pastor" until he got caught by Wonkette.

THAT Chuck Norris wants you to know what a hero of education Malala Yousafzai is. She appears to be the one Muslim in the world he doesn't suspect of secretly spreading Sharia law. He has all sorts of praise for her speech to the United Nations. The UN is an organization that Chuck Norris is also certain wants to destroy freedom forever by taking away your guns, but he gives that a pass this time.

Chuck Norris is cool with girls like Malala standing up to the Taliban and demanding to learn to read and write. Anything beyond that, though, he may have problems with. Girls certainly shouldn't be exposed to sex ed, unless they're told only to abstain. Girls who want to study biology need to understand that their high school teachers are all lying to them. Referencing the old joke that "There is no theory of evolution. Just a list of creatures Chuck Norris has allowed to live,” Norris explained:

here’s what I really think about the theory of evolution: It’s not real. It is not the way we got here. In fact, the life you see on this planet is really just a list of creatures God has allowed to live.

We are not creations of random chance. We are not accidents. There is a God, a Creator, who made you and me. We were made in His image, which separates us from all other creatures.

And once a girl has learned to read and write, she'd better not want control over her body, because Chuck Norris knows that abortion and contraception are evil, and Obamacare would have killed Baby Jesus. And heaven help that girl if she should be attracted to other girls.

Chuck Norris is going to tell us more in a future column what he thinks a good education system should include. Based on what we've already seen of Chuck Norris's thoughts on education, we have a feeling that, even with girls allowed in the classroom, Malala would recognize it. It would be centered on a holy book, it would emphasize obedience to God and to traditional family structures, it would prefer religious doctrine to modern science, and it would be taught by someone who always has a gun in his hands.