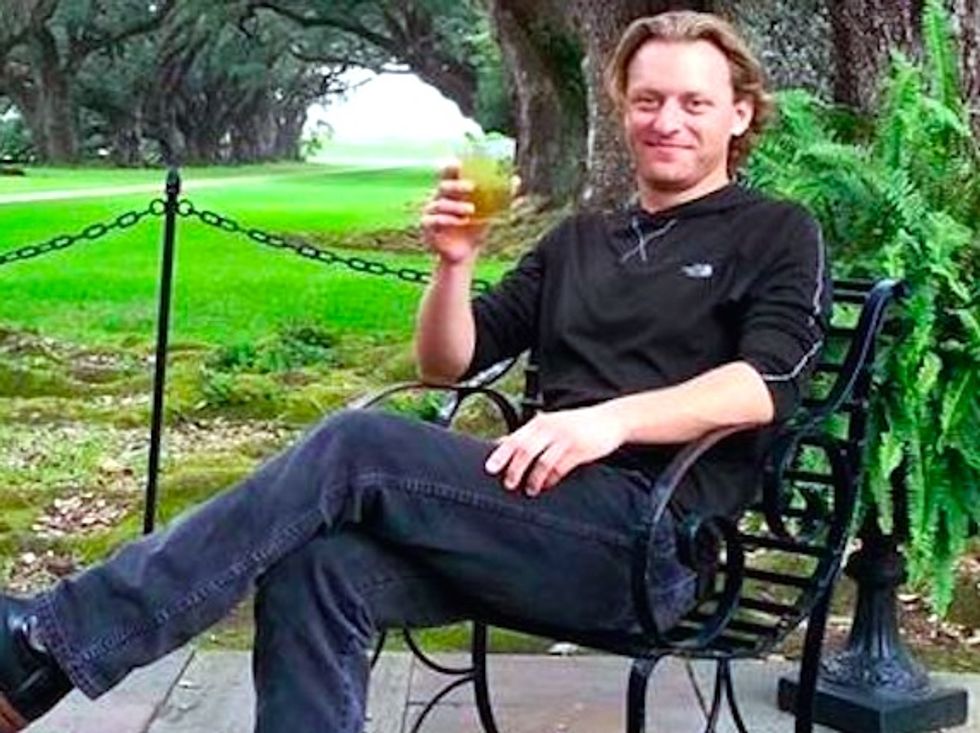 Just what we need: Dudebro fascists

Looks like Montana has its very own home-grown Davey Dukelet running for the state legislature, a cheerful little white nationalist named Taylor Rose. He is twenty-nine years old, and probably introduces himself with his age just like Milo Minderbinder did. Mr. Rose's campaign website looks like any other right-leaning candidate, with the usual blather about "the liberties and traditions of our forefathers" and upholding the Second Amendment, getting rid of Common core, and "protecting the rights of parents to home school their children according to the tenants [sic] of their consciences."

Oh, and then there's the stuff his website doesn't brag on so much, like his admiration for European nationalist leaders and their focus on keeping Europe pure and Christian. In a flattering interview with the neo-Confederate League of the South, Rose praised rightwing European racists like Geert Wilders and Marine LePen, and spoke of the necessity for Europe and America to return to a Christian basis" lest the Muslims and the Left take over and destroy civilization:

Christianity will become the unifying religious force for the Right-Wing movements in Europe and the USA, for the only way to have a true revival of Occidental power both inwardly and outwardly is for the Occident to return to its historical foundations rooted in Christianity. Humanism is a failure and the only hope for a restoration of strength and liberty is a conviction in the inspiration of Christianity’s absolutes.

Mind you, he is not a Nazi, because you see the Nazis had a "godless belief system," and for all we know, he probably thinks the Nazis were socialists. Instead, Rose is very much into the wonderfulness of Jesus, who would never allow Muslim refugees or a bunch of Messicans to pollute America, as we see from these Facebook pics Rose posted:

Rose is a graduate of Liberty University, and considers American politicians like Marco Rubio horrible sellouts, because he is nothing more than a "shill for the Neo-con establishment" and "sounds more like a Clinton-Bush era apparatchik than a traditional Tea Party Conservative."

The SPLC notes that Rose

acted as vice-president of a now-defunct white nationalist campus group Youth For Western Civilization (YWC). Rose headed the Liberty University chapter of the group. YWC was known for inviting white nationalists to college campuses and holding racially offensive events, such as an anti-immigrant event at Washington State University in 2011 where the YWC chapter erected a mock border fence complete with signs reading, “no crossing.”

Mind you, the anti-immigrant YWC insisted it wasn't racist, not that the leftist smear-term "racist" means anything anyway except that a white Christian Man is standing up for his own heritage. Rose even wrote him a book, Return of the Right: How the Political Right Is Taking Back Western Civilization, which rails against "the attempt to institute a radical, multicultural, New World Order agenda" and promises that will never happen, because thank God, "the Western world is coming to realize the complete emptiness and harm of belief systems that are at their core, nihilistic." Sometimes Yr Wonkette is willing to buy and review terrible awful rightwing books, but this one doesn't appear to have any indestructible cowboys or erotic poetry about guns in it, so we'll pass.

[wonkbar]<a href="http://wonkette.com/587979/very-sane-montana-republican-will-let-you-retire-at-600-maybe"></a>[/wonkbar]Unlike most of your fringey far-right crazies, Taylor Rose isn't having any problem at all getting support from the mainstream Republican party. He's running unopposed in the June 7 Republican primary, and has won the endorsement of several state Republicans, including former state Rep Jerry O'Neill, as well as campaign contributions from GOP state Sen. Mark Blasdel and Republican gubernatorial candidate Greg Gianforte -- the dude who thinks the retirement age ought to be 600 years old, since that's when Noah stopped working after the Flood.

Rose is also giving some thought to his national profile; he recently removed a couple of Facebook posts that he seems to have decided were a bit too honest about his disgust at brown people. Happily, they were screenshotted for posterity by Friend of Wonkette The Montana Cowgirl:

We think the little smiley face next to the fantasy about hanging all of "them" -- blacks? Cultural Marxists? Democrats? All of the above? -- really emphasizes how playful and friendly your modern white nationalist can be.

Or maybe it's the idea of a white woman polluting her Aryan womb with implanted negro embryos that squicks him out. Perhaps he's not a racist at all, and is merely disgusted by reproductive technology meddling in God's domain. Yeah, that's the ticket, and he deleted the post so no one would misunderstand him. Oh, yes, and we also learn from the Facebook that Mr. Rose is a member of a "Monarchist" group, though maybe he's just there to keep an eye on 'em.

Taylor Rose is running in the general election against incumbent Democrat Zac Perry, who has some experience winning against rightwing candidates. In 2014, Perry defeated teabagger Jerry O'Neill, who once became a minor political celebrity when he demanded to be paid his legislative salary in gold. Should be a fun campaign, especially if Rose tries to keep his more flamboyant thoughts on white nationalism under wraps.