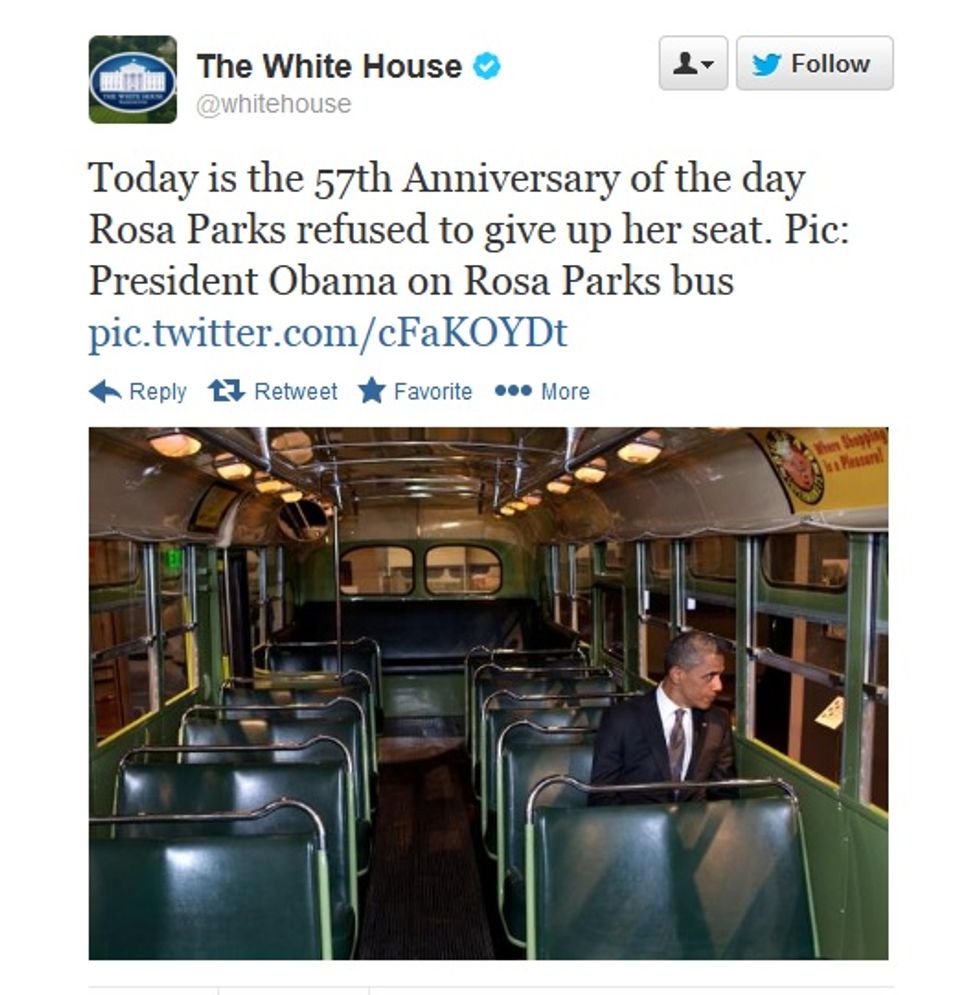 Lest anyone get the idea that the Daily Caller is just a teensy bit racist, they would like you to know that they actually care more about Factual History than certain Presidents of the United States do. For instance, did you know that the Daily Caller's Neil Munro is very protective of the legacy and reputation of Rosa Parks? It's true! Saturday was the 57th anniversary of Parks' refusal to give up her seat to a white bus passenger, and the Daily Caller's Neil Munro is quite indignant that the White House marked the anniversary by tweeting a photo of Barack Obama sitting in that very bus (from a visit to the Henry Ford Museum back in April).

Well, The Daily Caller's Neil Munro was not going to stand for such an insult to the memory of a revered Civil Rights leader (who is also conveniently dead now), although they also couldn't be bothered to actually subtract "1955" from "2012," either:

The White House used a tweeted picture of President Barack Obama to mark the 55th anniversary of Rosa Parks’ bus protest in Montgomery, Ala, on Saturday...

The White House did not send out a picture of Rosa Parks...

Just look at how outrageous this photo is! Rosa Parks refused to give up her seat, and then this terrible man comes along and sits in it anyway!

But the Daily Caller's Neil Munro is of course concerned not only with (conveniently dead) civil rights heroes! He also worries that this is only the "latest example of the White House’s Obama-centric perspective," noting that "Obama’s staff used a picture of Obama staring at the sky to mark the death of Neil Armstrong" and "tweeted a picture of their boss when marking Vice President Joe Biden’s birthday." (OK, so it was a photo of Obama and Biden together. Still, that's outrageous for some reason, because it Fits The Narrative). How utterly shocking, that a twitter feed for the White House might actually include photographs of the President. (And often very good photos -- we like that Pete Souza picture-takin' fellow!)

But wait! It gets even more obscene!

Since May 2011, Obama and his staff have tried to grab as much credit as possible for the mission that successfully killed Osama Bin Laden.

However, the president and his staff like to downplay Obama’s role in any problems facing the country.

Why would anyone in the Obama administration think that the President who gave the order for the mission deserves any credit for it? As for problems, it's not just "blahblahblahBenghazi!!!!!blahblah"; did you know that Barack Obama also caused the financial collapse?

During the bubble, Obama worked as a lawyer in 1998 to get mortgage loans for people with very poor credit histories. More than half of his clients have since gone bankrupt or have been foreclosed.

The Daily Caller's Neil Munro has resurrected this info-nugget from the 2008 campaign: Barack Obama did indeed bring a class-action suit on behalf of 186 people, and as anyone knows, the financial crash was caused by poor blahs getting houses they didn't deserve. It had nothing to do with Wall Street traders speculating wildly on utterly worthless investment instruments.

Wonkette would like to thank The Daily Caller's Neil Munro for putting things in perspective.