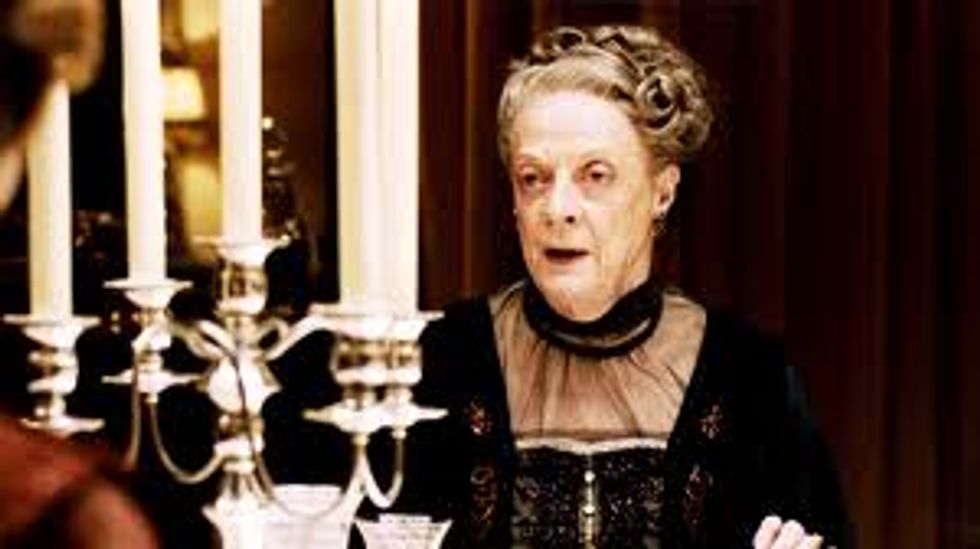 Well we never! Did you know that Queen Michelle Obama is so enamored of the BBC televisionne programme "Downton Abbey" that she "begged" to get season three before the rest of us servants, and they gave it to her???The Daily Caller knows, and they are, predictably, taking exceptionne.

So much for being an average American citizen. The perks of having the last name “Obama” don’t stop at living luxuriously in the White House or flying around on Air Force One.

In fact, the perks extend to something far more exclusive and unattainable for your everyday American: The Obamas get to watch the third season of “Downton Abbey” before the rest of the country does.

Michelle Obama is so enamored with the series that she just couldn’t wait until it airs in the U.S. in January and “begged” british TV channel ITV to get the third season’s episodes early, UK’s The Telegraph reports. Ask and ye shall receive — if you’re the first lady.

Fetch our pearls that we may don them and then grasp them all to pieces! Why she gotta be like that? Is there something wrong with BET?

How else are you hurt-of-butt, Daily Caller?

But what about the rest of us?! We want to know if Cousin Matthew’s junk magically starts to work so he can marry Lady Mary, and we want to know more about this alleged war-wounded other “cousin.” We, too, want to see Shirley McClaine and Maggie Smith passive-aggressively interact with each other. Ugh.

The rest of us plebeiens [sic] will just have to wait until ”Downton Abbey’s” Jan. 6 premiere to find out.