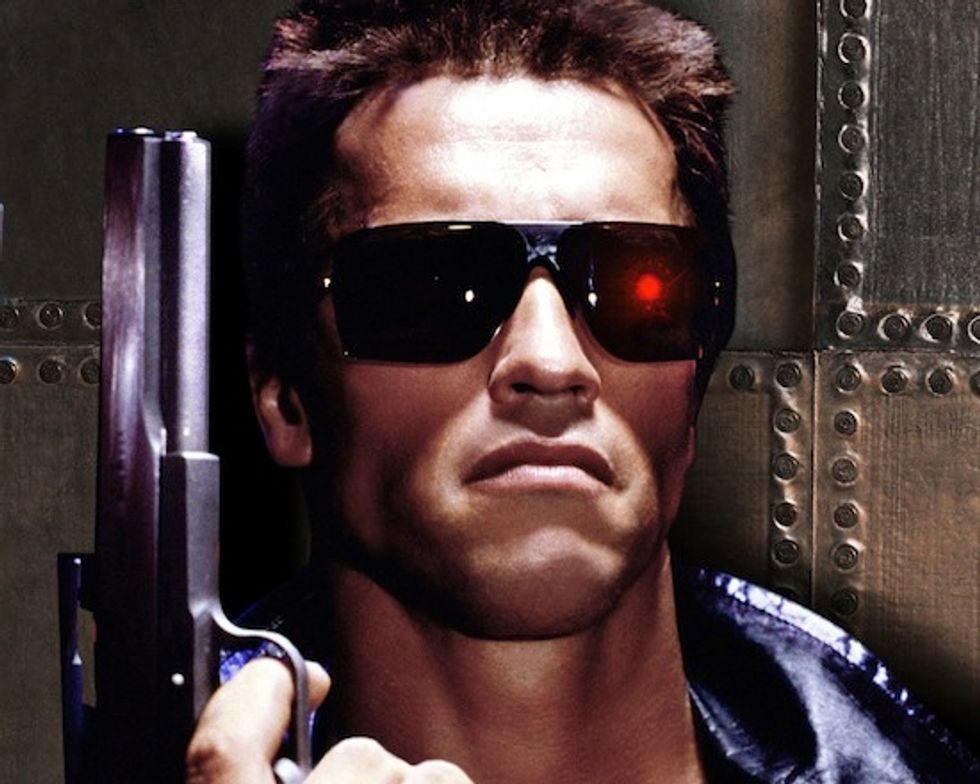 It can't be reasoned with. It doesn't feel pity, or remorse, or fear. And it absolutely will not stop, ever, until you are dead.

We saw no other option but to use our bomb robot and place a device on its extension for it to detonate where the suspect was...Other options would have exposed our officers to grave danger. The suspect is deceased … He’s been deceased because of a detonation of the bomb.

As far as anyone can tell, this is the first time a police robot has been used this way to kill a suspect in a standoff -- or any other circumstances. Like most large cities, Dallas PD usually uses robots -- controlled either by radio or by a direct cable connection to the operator -- for missions that might put a human officer in danger, like defusing or removing bombs, searching rubble in an unstable structure, taking video in areas where bullets are flying, and so on.

In June 2015, Dallas police used a robot to access an armored van used in an armed lunatic's attack on police headquarters, fearing the vehicle might have been rigged with explosives. Robots are sometimes equipped with a shotgun attachment, used to detonate bombs or shoot through doors, but this is something new, and as far as we can tell, more an on-site improvisation than anything the Dallas PD had planned out as a contingency (that's speculation -- if we learn otherwise, we'll update). The Atlantic talked to some experts on this sort of thing:

“I’m not aware of officers using a remote-controlled device as a delivery mechanism for lethal force,” said Seth Stoughton, an assistant professor of law at the University of South Carolina who is a former police officer and expert on police methods. “This is sort of a new horizon for police technology. Robots have been around for a while, but using them to deliver lethal force raises some new issues.”

Robotics expert Peter Singer of New America also told the Associated Press he believed the use was unprecedented.

Singer added in a tweet that while this is the first use of a robot to deliver an explosive by police, it's not an absolute first in the world:

Stoughton noted that while the delivery method was novel, the use of lethal force in this situation was already justified by the danger to officers' lives, so the use of the robot may not break any new legal ground: "Once lethal force is justified and appropriate, the method of delivery — I doubt it’s legally relevant."

Beyond surveillance and bomb disposal, there have been a few other uses of remotely operated vehicles to assist in nonlethal ways with police operations. In 2014, a police SWAT team in Albuquerque, New Mexico, used a radio-controlled bomb squad robot to deliver "chemical munitions" into a motel room where an armed suspect was barricaded, which helped police subdue and arrest the suspect.

The real question, of course, is how far this is likely to go. Now that one police department has used a robot to deliver an explosive to kill a suspect in a shootout, what's next? The Atlantic suggests mission creep is almost inevitable:

[I]magine a scenario in which a suspect has been shooting but is not currently firing, and in which all officers are safely covered. In such a case, police would likely not open up a gun battle. But would commanders be quicker to deploy a robot, since there would be less danger to officers? And would current lethal-force rules really justify it? There is reason to believe they would not.

In all these cases, the robots used by police have been non-autonomous: they're operated remotely by police, not controlled by an onboard artificial intelligence of any kind. Use of really independent killing machines is still some time away, though probably closer than we might be comfortable with. But surely they'll have built-in safeguards to prevent accidents. The future's so bright, we gotta wear body armor.

Eh, they probably won't fuck up that more often than human cops. And at least they can be programmed not to assume all black motorists are murderous thugs, maybe.