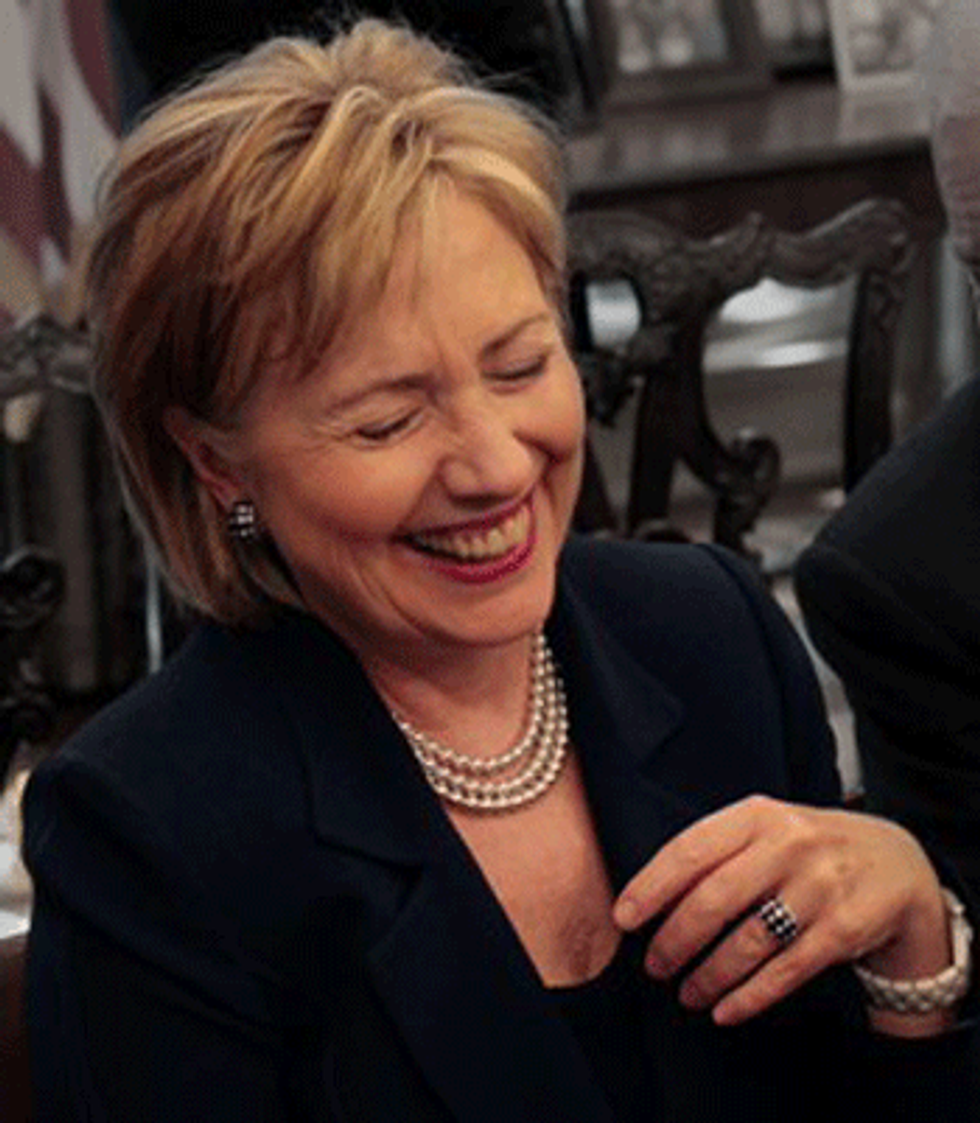 HAHAHAHA I GOT AWAY WITH IT! (That is what idiots think she is saying.)

Well, big surprise and whoop-de-doo, Attorney General Loretta Lynch has caved to the demands of Big Hillary, releasing a statement late Wednesday afternoon saying she will accept the FBI's recommendations (just like she was always planning on doing ... or BRIBED!) and will not pursue charges against Hillary Clinton The Hotmail Criminal. Read it and weep:

In case you can't embiggen that on your Obamaphone, here's what it says:

Late this afternoon, I met with FBI Director James Comey and career prosecutors and agents who conducted the investigation of Secretary Hillary Clinton's use of a personal email system during her times as Secretary of State. I received and accepted their unanimous recommendation that the thorough, year-long investigation be closed and that no charges be brought against any individuals within the scope of the investigation.

[wonkbar]<a href="wonkette.com/603709/why-hillary-clinton-will-not-rot-in-jail-for-aggravated-emailing-your-ultimate-emails-wonksplainer"></a>[/wonkbar]Well there you have it. Crooked Lying Hillary is a free woman, and America as we know it is even deader than it was when we elected a Kenyan Marxist Usurper from Indonesia to be our president, TWICE.

Lynch has not said whether Hillary is once again free to check her Gmail, just in case she needs to forward some top secret classified Groupons to Sidney Blumenthal.

Also on Wednesday, there was a bit of a GOTCHA! going around the left-wing internet, about how it turns out that, out of all the 110 emails FBI Director Comey stated contained classified information, TWO WHOLE EMAILS were actually marked as classified, and out of those two emails, TWO WHOLE EMAILS were actually marked incorrectly. It's not that huge of a revelation, but it's worth noting that this means exactly zero emails correctly marked as classified went across Hillary's sexxxy email server.

So that's a thing.

[wonkbar]<a href="http://wonkette.com/603751/house-gop-wants-to-investigate-hillarys-emails-because-thats-gone-so-well-in-the-past"></a>[/wonkbar]Anyway, the point is that the book is now officially closed on this Emailgate bullshit waste of time, and we can all go back to our regularly scheduled programming. HAHAHA #JOKES, because House Republicans are about to start investigatin' the investigation of Hillary's emails, and they're sure to turn up all the dirty evidence that will put the tyrant queen in prison forever.

Yep. You betcha. That's how it's gonna work out. Go get 'em, GOP, you're good enough, you're smart enough, and oh fuck it, we forget the rest.