David Brooks's Abortion Column Should Have Been Aborted 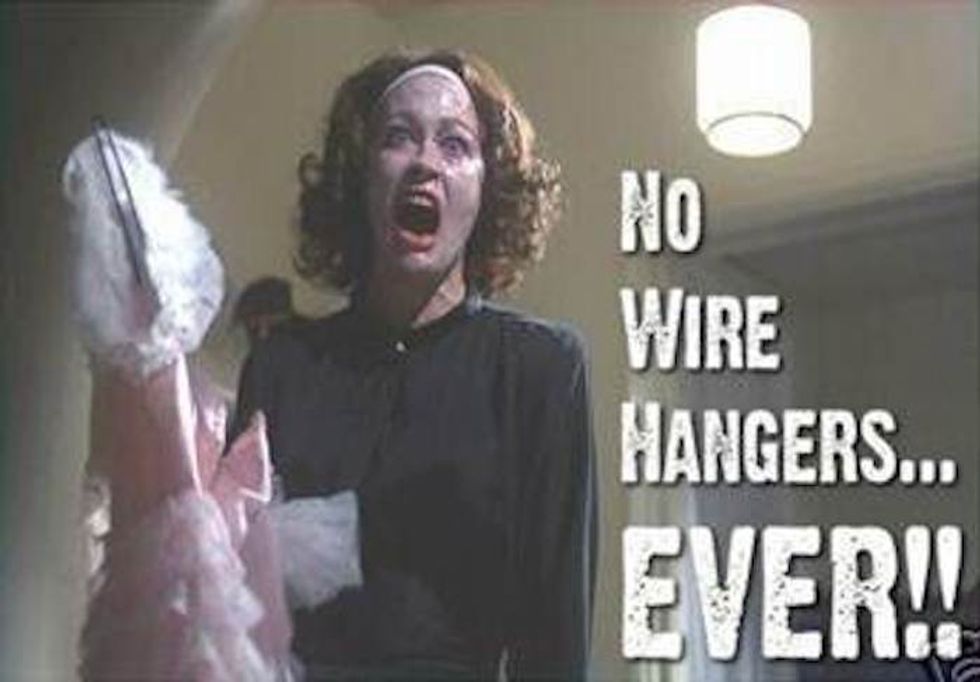 Re: The precise amount you need to go fuck yourself with a wire hanger

Now, I realize I am just a coastal elite who lives in the Midwest and has an Italian last name not entirely unlike the many lunch meats that once so frightened your friend. I apologize for this, and hope you will understand that I really couldn't anglicize it without running the risk of people thinking I once starred in Forrest Gump. Also, I am a woman. All these things may make you feel disinclined to listen to me, but I suggest you at least consider it.

In your New York Times column yesterday, you -- a conservative white man -- offered some advice to us progressives in the guise of an "Imaginary Democratic Consultant," which you are not. This advice was that "we" stop caring so much about keeping abortion legal, in hopes of reeling in the many voters you imagine would totally vote Democratic if only we gave up the ghost on that particular issue. People who would, surely, care about economic and racial justice if only they didn't come pre-packaged with, ew, reproductive rights.

Last week I watched as our senators voted down the Republican bill that would have banned abortions after 20 weeks. Our people hung together. Only three Democrats voted with the other side. Yet as I was watching I kept wondering: How much is our position on late-term abortions hurting us? How many progressive priorities are we giving up just so we can have our way on this one?

This is a rather fascinating departure from your earlier theory that the way for us to win would be to give up on "identity politics" and protesting. It's really lovely that you, a person who is going to vote Republican anyway, care so much about our welfare.

It is also very astute of you to notice that people vote for and against things they care about. Who would have thought?

However, as your life coach, I am going to have to recommend against spilling so much ink telling progressives what to do when you are not one of us and don't really understand what our priorities are. Perhaps you should rely instead on what you know best -- writing books about "character" and then dumping your wife for the woman who helped you write said book and is 28 years your junior.

You begin this missive by pointing out that, prior to Roe, there were pro-life leftists who were really into a living wage and collective bargaining but also wanted abortion to be illegal. Which, sure, is true. You then get things very wrong by suggesting that the coalition between country-club Republicans and the religious right started with Roe v. Wade -- which is not. In fact, it started with segregation and the 1972 Supreme Court ruling in Coit v. Green that affirmed private institutions practicing racial discrimination would not be eligible for a tax exemption. The initial issue that bonded them together was not abortion, but the belief that Bob Jones University ought to be able to ban interracial dating among its students and still be tax exempt. Abortion came later.

This is not insignificant. Not when your prevailing theory is that there is a slew of people out there who believe in racial and economic justice, but who are voting Republican because they hate abortion so much. If that were true, there would certainly be more pressure on Republican politicians to move to the left on these issues. If you will notice, there is not. There is nothing but silence. I'm not saying those people don't exist -- they do -- but appeasing the small number who might switch party affiliation based on abortion alone is not worth sacrificing that right.

Abortion is a class issue. Were we to have a situation in which, as you describe, abortion were illegal in the 21 or so states that want to make it illegal, it would only actually be illegal and unsafe for poor people. The rich would still be able to travel to states where it was legal in order to obtain safe and legal procedures, just as they did before Roe. Making abortion illegal means one set of rules for the rich and another set of rules for the poor, and that goes against anything anyone "progressive" might stand for.

Abortion is an economic issue. Abortion is, quite frankly, a large part of the reason women have been able to join the workforce and not rely on men to survive. Forced birth means not having the choice to make sure you are able to provide economically for a child before starting a family, it means more children growing up in poverty and fewer women being able to move forward in their careers.

Abortion is a race issue. The states with the highest number of black women are also the states with the most restrictions on abortion and the states which would most likely outlaw it if it were to come to that. Denying those women the right to reproductive justice will lead to fewer of them being able to have economic power, to being in positions of power, positions where they are hiring other people, and that kind of representation matters.

Abortion is a health care issue. This whole thing where you're talking about Democrats supporting abortions up until the ninth month of pregnancy -- do you know what that's actually about? Roe mandates that abortion remain legal through fetal viability, typically the 22nd or 24th week of pregnancy. You want to restrict abortions after the 20th week, but many tests for severe fetal abnormalities cannot even be performed until the 20th week of pregnancy. You want women to have to carry a dying fetus to "term."

It may surprise you, David Brooks, to know that even when abortion is illegal, it still happens. Before Roe, those who could not afford to travel to obtain safe and legal procedures were often relegated to unsafe, illegal ones performed by doctors who didn't know what they were doing, often resulting in death by sepsis or, if they're lucky, simply a lifetime of infertility. Or DIY abortions performed by throwing themselves down flights of stairs, coat hangers, poison, drinking bleach, etc. Being against abortion does not make anyone "pro-life." It doesn't even make them "pro-fetus."

Banning abortion, for many Republicans, is not even really about their great love of fetuses. It is about seeing women punished for the moral transgression of having sex for fun rather than procreation. It is about pulling women out of the workforce and back to the kitchen. It is about punishing them for not doing the job God intended for them -- a job which includes being the protectors of male virtue.

Without reproductive rights, nearly every other progressive goal goes right out the window -- the belief that health care is a human right, gender equality, income inequality, racial justice, and, perhaps most importantly, the very basic idea that there should not be one law for the rich and another for the poor.

Let me be absolutely clear here, if I have not been already. I would not vote for a Democrat who was against abortion.

Because this is not about electoral politics. This is not a game to me. There is no "winning" for me or millions of others, if we lose our reproductive rights, and no circumstance under which we would be willing to sacrifice them for something else.