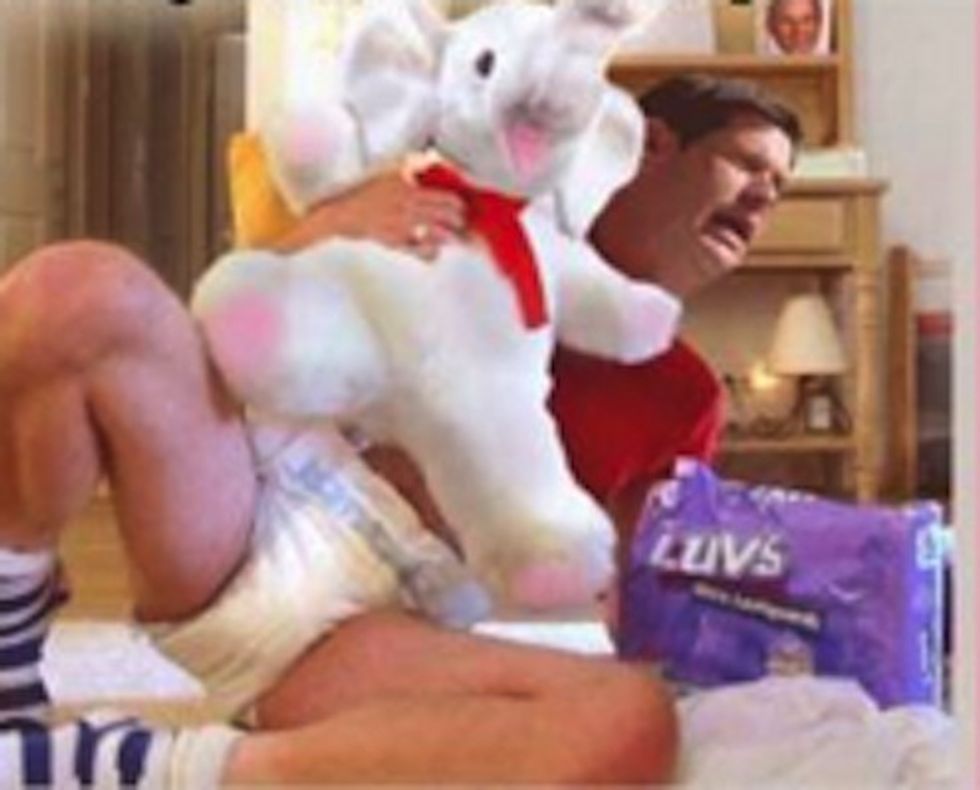 Oh, Sen. David Vitter (R-Whore House), we heart you soooooo much. No, really, we do. You are, in fact, our very favorite diapers-wearing john in the whole Senate. While some politicians might slink away from the public eye in disgrace after getting busted for patronizing professional women of the night (you know, paying hookers for sex), those politicians tend to be weenie Democrats. Not you, sir. You are a brave soul who will force your wife to stand beside you as you say you are "very, very sorry" for all those times you paid women to dress you up in diapers and do we-don't-even-want-to-know-what to you and then insist we forget all about that stuff so you can go back to lecturing us about family values and how the gays are destroying America with their gay and also just generally being a dick.

We applaud you, sir, and now we would like to thank you for this latest demonstration of courage under derp:

And how is Vitter being attempted-bribed by those rascally Democrats?

The letter responded to reports that Senate Democrats were shopping around a plan to deny government contributions to lawmakers' health care plans if there is "probable cause" they solicited prostitutes.

Oh, that is SO mean of Democrats! How dare they remind people that David Vitter paid chicks to bone him in his Depends! Of course, that is not how Vitter sees it. As he explains, Sens. Boxer and Reid are trying to affect Vitter's "personal finances" with their proposed legislation "that ties Members’ personal healthcare benefits to their performance of specific acts and votes." Hey, Diapers Dave, "performance of acts" sure is a classy way of saying "paid chicks to bone him in his Depends." Really, sir, we are in awe of you.

Again, that is not how Vitter sees it. As he sees it, he is simply trying to save America with his dickish amendment to undermine Obamacare -- which he is using to block other, totally-not-related legislation because, you know, he's a dick like that -- and those blue meanies are trying to bribe him into dropping his amendment. (We think this sounds more like extortion, but what do we know?) And Vitter is verrrrrrrry concerned about how such a bill might affect his fellow hooker enthusiasts in the Senate:

If a senator voted for Senator Reid's and Senator Boxer’s favored amendment, and against my amendment, it would appear that his or her decision was based on personal interests, and not the public interest.

Yes, if senators voted for the Democrats' amendment, and against Vitter's amendment, it sure would look like they probably had some hooker skeletons in their closet and were bribed into voting against the public interest just to make sure they didn't lose their health care benefits just because they had solicited professional sexytime. Really, Vitter's just accusing Democrats of bribery FOR THE PEOPLE!

You are a great public servant, Senator, and we thank you very, very, very much for trying to protect us from Obamacare and protect all the senators who have whored around and also for providing us with never-ending comedy gold. We will love you long time, sir. Just, you know, not in diapers because ew.