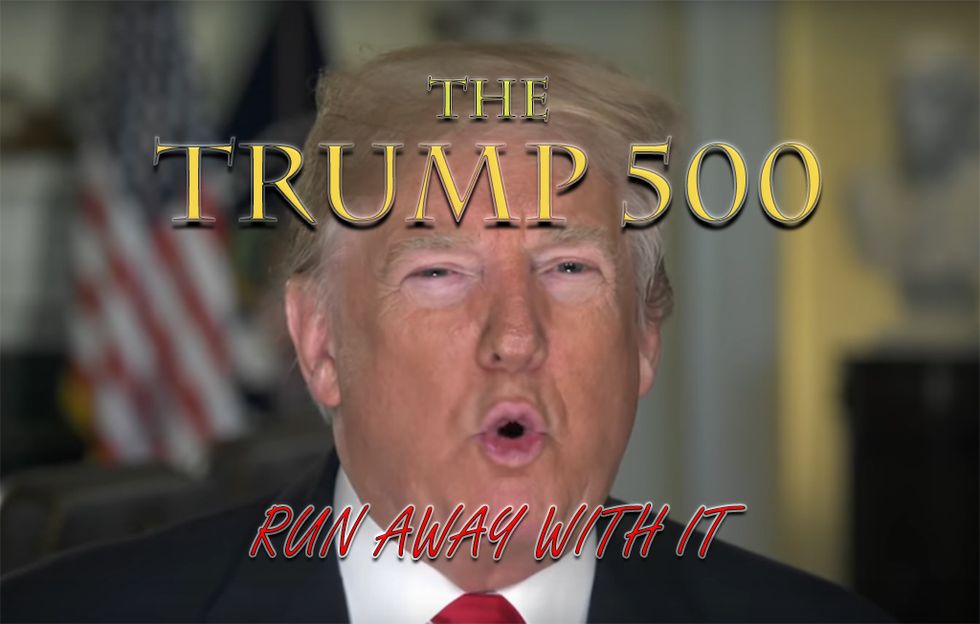 Trump's legal team is desperately trying to keep him from talking to Robert Mueller, so a few months ago they sent a memo to Mueller that says Trump can't actually commit a crime because he's the president. Sort of like how a husband can't commit rape because he's a husband.

Meanwhile, Rudy Giuliani spent another weekend running his mouth like an old drunk possessed by the ghost of Richard Nixon, telling Chuck Todd that Trump could kill any investigations he wanted, then telling George Stephanopoulos that Trump could also just pardon himself. But Rudy wasn't done! He then did an interview with HuffPo where he stated that Trump couldn't be indicted,even if he shot James Comey.

Even Axios is raising alarms about Trump's reality distortion bubble this morning, with Jim VandeHei warning, "If you think he won't try something unprecedented -- and maybe get away with it, at least with Republicans -- you aren't paying attention."

Robert Mueller's case against the Russian troll farm appears to be taking a legal shortcut in order to prove Russian cyber fuckery, and now the lawyers for the Russian firm are ironically bitching about fairness.

The FBI is looking into claims of hacking made by Elliott Broidy, the shady RNC money man who needed Michael Cohen to help him hide his $1.6 million affair with a Playboy model.

Acting IRS commissioner David Kauter is warning that a combination of budget cuts and the Trump tax cuts (for the super rich) mean the IRS won't be able to help people who have questions about their taxes.

A bunch of pencil pushers at the National Association for Business Economics are warning that the Trump tax cuts (for the super rich) are pushing the economy towards a recession by 2020, and they're even less optimistic about 2018 than they were three months ago.

The AFL-CIO has launched a massive recruitment drive ahead of a SCOTUS ruling on public-sector unions by promoting the benefits of unions and collective bargaining.

The fight over immigration legislation is about to spill into the House leadership race as moderate Republicans are now suggesting less-than-batshit alternatives to succeed Paul Ryan. [Archive]

A lot of flyover country GOP hopefuls have begun to parrot Trump's anti-immigrant rhetoric on the campaign trail.

Last month, a bunch of Republicans were sobered and/or pissed to hear the head of the nonpartisan Cook Political Report tell them they're (probably) screwed for 2018.

The vote-purging Kansas Secretary of State Kris Kobach was tooling around in a jeep with a replica machine gun mounted in the back, complete with belt-fed ammo, and told a local TV station, "I think it's kind of amusing that snowflakes today think that people are afraid at the sight of a gun."

Survivors of the Parkland massacre at MSD graduated yesterday and were given a commencement speech by Jimmy Fallon. This summer, some of the students will hit the road to drive voter registration and anti-gun initiatives. [Video]

A judge has dropped charges of criminal trespass for journalist Jenni Monet, who was arrested during DAPL protests in February of 2017.

Trump's superannuated Commerce Secretary Wilbur Ross has concluded another round of trade war negotiations with China that went nowhere.

Non-US G-7 finance ministers are bitching about Trump's trade war, calling it a "unanimous concern and disappointment" ahead of this weekend's G-7 meeting. [Archive]

Larry Kudlow tried to brush off criticisms by your secret Canadian boyfriend Justin Trudeau, who told Chuck Todd, “The idea that we are somehow a national security threat to the United States is quite frankly insulting and unacceptable." [Video] [Archive]

The UN special rapporteur on extreme poverty and human rights is criticizing Donald Trump for exacerbating poverty and wealth inequality in the US, and says that Uncle Sam should stop "punishing and imprisoning the poor." Fucking Commies.

Later today, Mike Pence is expected to call for Venezuela to be removed from the Organization of American States as a rebuke to Nicolas Maduro, the autocrat who's rushed to consolidate power and plunge the country into economic and social chaos.

In an attempt to preserve the JCPOA, Iran's foreign minister is calling on signatory nations to rebuke the US and its "bullying methods to bring other governments in line."

Russian President Vladimir Putin is sad that a "fierce domestic political contest" is preventing him from popping a squat with Donald Trump to pass water under the bridge.

There's a new campaign of Russian cyber fuckery trying to convince people to celebrate Trump's birthday in conjunction with Flag Day by calling for rallies on June 14.

In order to brainwash people into using Facebook even more, Facebook secretly gave phone manufacturers access to your and your friends' personal information, and tried to keep it private.

Melon Trump will be released from the White House to give medals to soldiers at Walter Reed. Trump's White House says that she is very happy, and definitely not hiding -- even though she will not join Trump on his tour of Not America.

And here's your morning Nice Time! Penguin chicks! They're so cool!

We're 100% ad-free and reader-supported, but we need more coffee, and only you can help us!