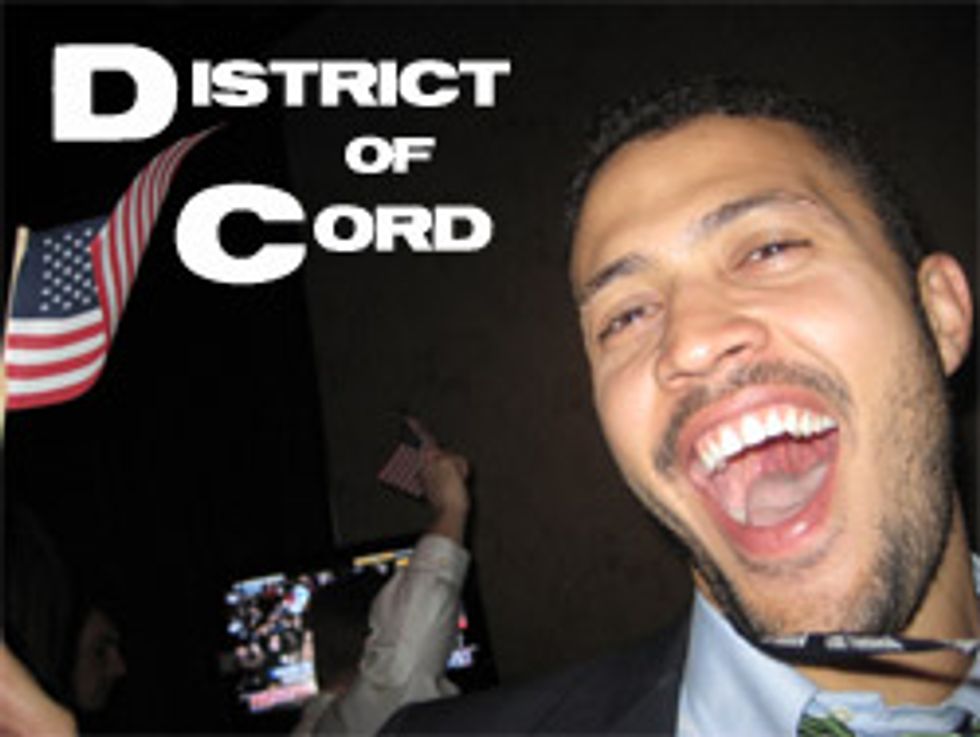 One thing I noticed the other night, while watching a girl stumble out of Tom Tom and fall headfirst into a cop car, is that people in DC sure do love to get drunk! Not that residents of other cities don't also like to imbibe, of course, but I've never seen anyone in New York get to a happy hour so lickety-split as people in Dupont Circle, who straight up SWARM the Mad Hatter come 5 p.m. -- and that place is nothing but a godforsaken morass of analysts trying to do missionary with still more analysts. Now that it's the Holiday Season, when even responsible people turn to heavy drinking, it's time for our Yuletide DC Drunken Ground Rules.

1. Thou shalt never order a damn martini or glass of wine at packed happy hour.

You seen these pricks? The ones who amble up to the bar at 5:15, with dozens of fellow drinkers waiting behind them, order martinis, and then proceed to BITCH when they get their arms jostled and their little drinks spill? I hate these people, and I often see them in places like Georgetown or Bar Dupont. Order a beer or a highball at a crowded bar, and don't freak if someone bumps you a little. Drinking should be fun.

2. Don't let anybody make fun of your favorite drink.

Hey, if you're a guy that likes vodka-cranberries, then you drink those things until the whites of your eyes turn pink, my man! Who cares? A lot of dudes in DC try to do the Southern Gentleman thing and order endless streams of straight bourbon even though they don't like bourbon at all. You can tell these people by the way they cringe like they've been kicked in the nuts every time they take a sip. This is stupid. If you tie your masculinity to your ability to drink brown liquor, you are still so much of a boy that you should not be allowed into a bar.

I drink vodka-sodas with lots of lime juice like I'm some WASPy soccer mom on Long Island. They taste good and they keep me semi-hydrated. The end. (The one caveat here is if your favorite drink is named after any part of the female anatomy -- if that's the case, you deserve to be mocked mercilessly and have all your football paraphernalia burned on top of your beer pong table.)

Seriously! That "never turn down a drink" stuff is bravado horseshit done by people in cowboy movies. Cowboys also killed brown people at will and died of syphilis. Cowboys are not cool, and neither is drinking a shot of Old Crow and then puking it right back up onto the bar along with your Buca di Beppo fettuccine. If you do not want a shot, you should not take a shot. It's that simple.

4. Do not hit on the bartender/cocktail server.

This rule does not apply to women, who generally can hit on whomever they'd like. This rule is for men who get off on pretending to be on the opposite side of the power differential between themselves and their work superiors. You see this absolutely everywhere in DC, and it is sociopathic. If you're really out to show people who's boss, have children and make them play the sports you sucked at, like a normal son of a bitch. Leave the service people alone.

You know who doesn't tip? Australians. And those people are stick-wielding, colonizer maniacs who riot every time they see an Asian with fancier shoes than they have. A buck a drink is good. Two bucks a drink and you'll get served before everyone, always.

6. If you puke, stop drinking.

Ignoring this rule can sometimes be difficult, especially if you hate yourself. I myself ignored it my entire junior year of college, and I had friends who, whenever they got too drunk, would do something called the "spin cycle." That meant they would drink a glass of warm water, do a few dozen jumping jacks, then force themselves to vomit up the contents of their bellies before drinking more. They sometimes did this on dates! Nevertheless, vomiting into the urinal like a vagabond and then trying to jam another cocktail down your throat is depressing and stinky and wretched. Also, right around puking time is when you think your racist jokes are charming. They are not. Get into a cab, and brush your teeth when you get home.

Because they are world-raping contractors and con-artist "consultants," many white people (and some black people!) in DC remain flush with cash while the rest of the world eats cat food heated up on engine blocks. If you are one of the fortunate people, buy a round or two for your laid-off friends. I promise it will feel better and be a cooler gesture than ordering that LeBron James novelty toilet bowl brush or whatever bullshit is on the teevee.

8. Don't get sloshed in front of your boss.

"But my boss is basically a garbage bin filled with scotch," you're saying. Many bosses are, especially in Washington, but that doesn't mean you should go dropping your guard in front of them. If you're out for drinks and your boss is there, have a few beers and then excuse yourself to the Velvet Lounge. Bosses don't go there because they're insecure about being too rich and not knowing what music is playing. Then you can drink and dance until you fall over without ever having to worry about somebody being vindictive and canning your ass because of that one party once.

9. Don't go to gay bars during your bachelorette parties.

This is something weird that I don't think is unique to DC, but I've talked to my gay roommates and they say it is worth mentioning. Just because you like Ellen and think the kid from Ugly Betty is adorable doesn't stop it from being weird to go to gay bars and scream and drink appletinis out of penis straws the night before you get married. This amounts to basically you looking for a human zoo, where you expect all the attractions to be "fierce" and catty, like the judges on Project Runway. Actually, gay people go to bars to blow off steam just like the rest of us, not to entertain you and your obnoxious bridesmaids. (Also, if you're doing this in most of the rest of America, it kind of sucks to rub your wedding into the faces of people who can't legally get married.)

10. Don't eat that jumbo slice, no matter how wasted you are.

That shit is to pizza what Slim Jims are to beef, and the way the lines extend into the vomit-filled gutters of 18th Street is so undignified. Do you like to feel ashamed while eating? I don't, and I'm pretty sure shame is all you can summon while standing in a pissey alley, drunk, surrounded by other drunks all eating a triangular piece of hot cheese-trash the size of a baby. Just go home and eat some pasta.

Cord Jefferson’s column appears every week here on Wonkette, unless he's too tired/hungover/sad from dealing with stupid drunks like you. Redeem yourselves by buying him a drink, or "following" him on the Twitter. Just don't follow him to his favorite bar.