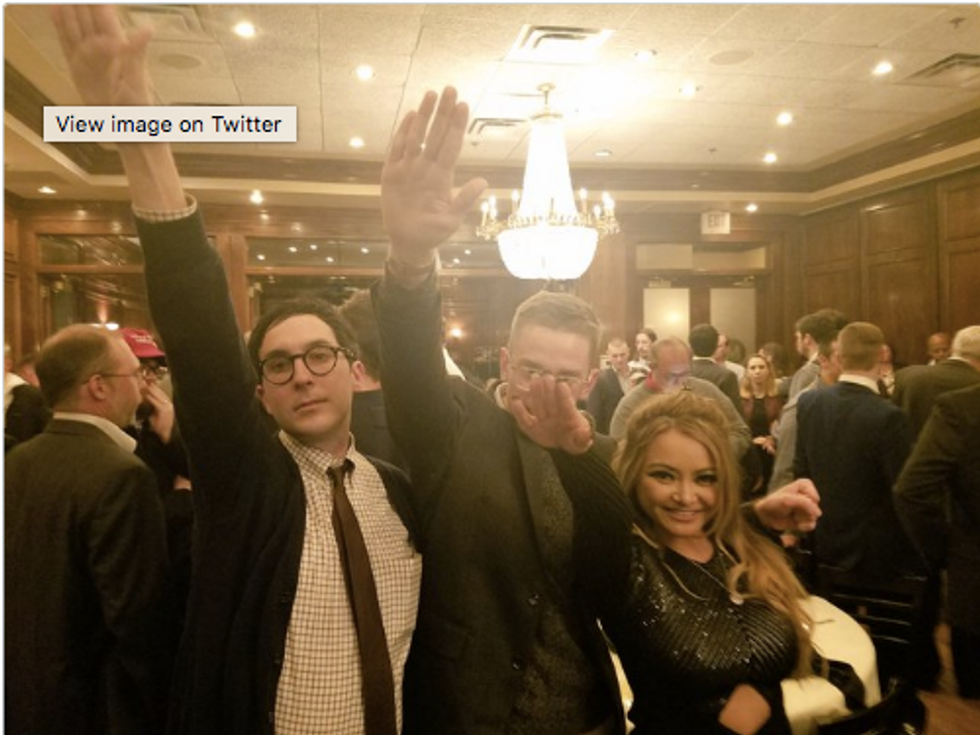 This weekend, Maggiano's Little Italy in Washington D.C. found itself the unwitting host to a large group of members of a white nationalist think tank, the National Policy Institute, that had booked a reservation under another name. The group's stated goal is to provide a lobby for white nationalism and provide an alt-right "intellectual vanguard" for the purpose of helping Donald Trump transform into the next Hitler.

Naturally, this "intellectual vanguard" includes Flat Earther, Hitler apologist and former MySpace "star" Tila Tequila -- who is not actually a white person, but why try to make sense of anything at this point anyway?

Vice interviewed several people who attended the NPI's conference over the weekend, several of whom were not white, but nonetheless supported the idea of turning America into a "White Ethno-State." Highly recommend checking that out if you are not yet convinced that the alt-right is a white nationalist movement, because you are actually not a person but are a dinner salad with no eyes or ears or mouth, maybe.

At the event, several members of the group tweeted pictures of themselves doing the "Sieg Heil" pose, as they are wont to do.

In response to this, Maggiano's has released a statement decrying the event and expressing its regret for hosting it in the first place. The restaurant will also be donating all profits from the evening -- $10,000 -- to the Anti-Defamation League.

On Friday night, Maggiano’s in Friendship Heights was the inadvertent site of a protest that caused us to close our restaurant to protect the safety of our Teammates and Guests.

The protesters were upset because of a banquet we were hosting for a group called the National Policy Institute (NPI). This was a last minute booking made Friday afternoon, and the reservation was made under a different name, therefore we were not aware that NPI was dining with us or what the group represents. After the event, an attendee sent a tweet in which she made a “Sieg Heil salute” in support of Hitler and white supremacy. This expression of support of Hitler is extremely offensive to us, as our restaurant is home to Teammates and Guests of every race, religion and cultural background.

We want to sincerely apologize to the community of Friendship Heights for inadvertently hosting this meeting, which resulted in hateful sentiment. We want you to know that at the suggestion of one of our Guests, we are donating the profits from our restaurant sales on Friday, $10,000, to the DC office of the Anti-Defamation League, which for decades has been working to bring people together in peace and understanding.

Contrary to the National Policy Institute's goal, the ADL is working to prevent Trump from becoming the next Hitler. You know, because they kind of have some feelings about that. The CEO, Jonathan Greenblatt, has in fact already stated that he would like to be the first to register should Trump implement his desired "Muslim Registry." So, really, an absolutely perfect place for all of their money. In fact, I think we should all just keep hosting them at things and then taking all of their money and giving it to people they don't like, who are working to ensure they don't get what they want. Sounds like a great plan to me!