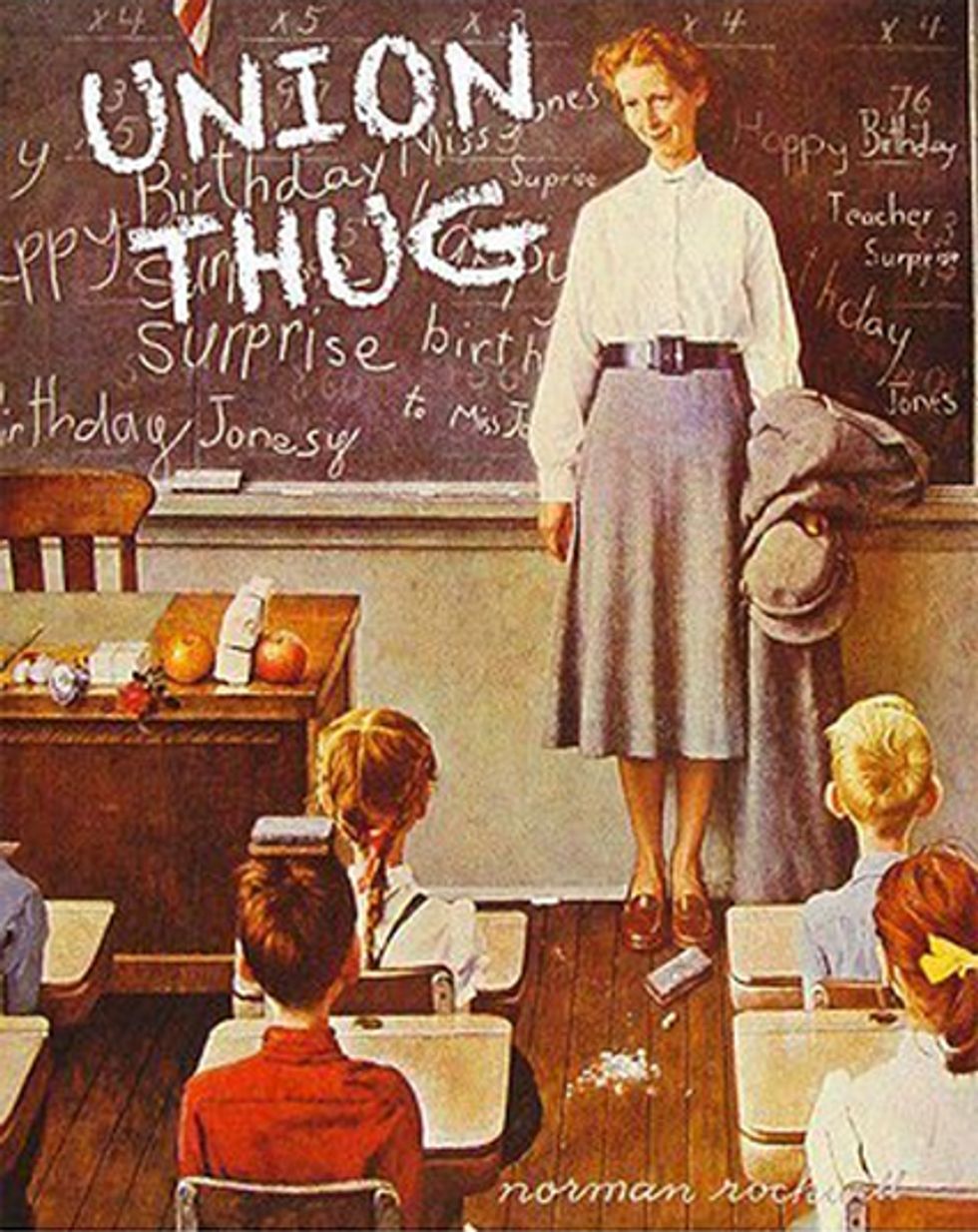 What is this 'chalkboard' you speak of?

We're happy to say we saw this coming: with Antonin Scalia's vote now completely hypothetical (despite the best hopes of some loonies), the Supreme Court voted in a 4-4 tie on a major case that could have stripped public employee unions of much of their power, and probably would have, if Scalia hadn't been murdered to death with no evidence at all. But with the tie, the lower court's ruling in favor of California teacher unions stands, and now the poor plaintiffs in Friedrichs v. California Teachers Association will be forced to pay a small fee to cover the costs of the union bargaining for them, even though they don't like unions, not at all, one bit. Let's Wonksplain how a dead man saved the teachers' union:

Now What's This All About, Then?

As we explained when the case was argued in January,

At issue is the ability of public sector unions to charge nonmembers a fee to cover the costs of collective bargaining. A California teacher named Rebecca Friedrichs is suing the California Teachers Association, claiming that having to pay any fee at all for union representation is a violation of her free speech rights. Friedrich doesn’t belong to the CTA, but she and other nonunion teachers still have to pay what’s called an “agency fee,” or, more accurately, a “fair share fee,” which covers the cost of collective bargaining. The logic there: since all workers benefit from collective bargaining, it’s only fair to have everybody pay for the costs of doing it, even workers who opt out of joining the union. This prevents cheapskates from being “free riders” who get the higher wages and job protections of a union, but don’t pay their fair share of the union’s costs of negotiating for those bennies.

Friedrichs and her co-plaintiffs, who were happy to serve as stand-ins for a number of anti-union conservative groups, argued that forcing teachers to pay a fair share fee violated their First Amendment rights, since it compelled them to give money to an organization they never ever agree with, even if it resulted in their getting a raise or job security. Maybe they don't want those evil liberal things! The union-despising teachers were backed by the "Center for Individual Rights," a conservative law firm specializing in challenging liberal stuff like affirmative action, union rights, and the Voting Rights Act. And yes, kids, they're funded by the Koch Brothers, imagine that.

Scalia Was Going To Vote To Screw Unions, Wasn't He?

Sure looked that way. Some analysts thought Scalia might be supportive of the teachers union, if only to prevent public employees from rushing to court with a free speech case every time they didn't get what they wanted. But during the actual arguments in January, Scalia "was consistently hostile" to the very idea of fair share fees, since they compelled public employees to pay for speech they disagree with:

”The problem is that everything that is collectively bargained with the government is within the political sphere, almost by definition,” he said.

Had the plaintiffs won, public sector unions would have lost a key source of revenue, dealing a huge blow to one of the last parts of the labor force with relatively strong union representation.

Unfortunately for the anti-union crowd, Scalia was unavailable to add a vote to the four conservatives who wanted to rule for the plaintiffs, and the tie vote results in upholding the lower court's ruling in favor of the California Education Association. Sorry, poor oppressed rightwing teachers -- you'll just have to live with getting raises and job security, and paying a minimal fee for the cost of the unions who help gain those benefits. And the Kochs and the anti-union groups they fund will have to pour a lot more money into getting a Republican elected to appoint another reliable anti-labor justice to the Supreme Court. Yes, darlings, this makes it all the more important to vote for whoever has the D after their name in the November.

Why, yes, there's really nothing better than this fake AFSCME ad, which helps us remember why unions matter:

They pick up the fuckin' garbage. Show some fuckin' appreciation, asshole.