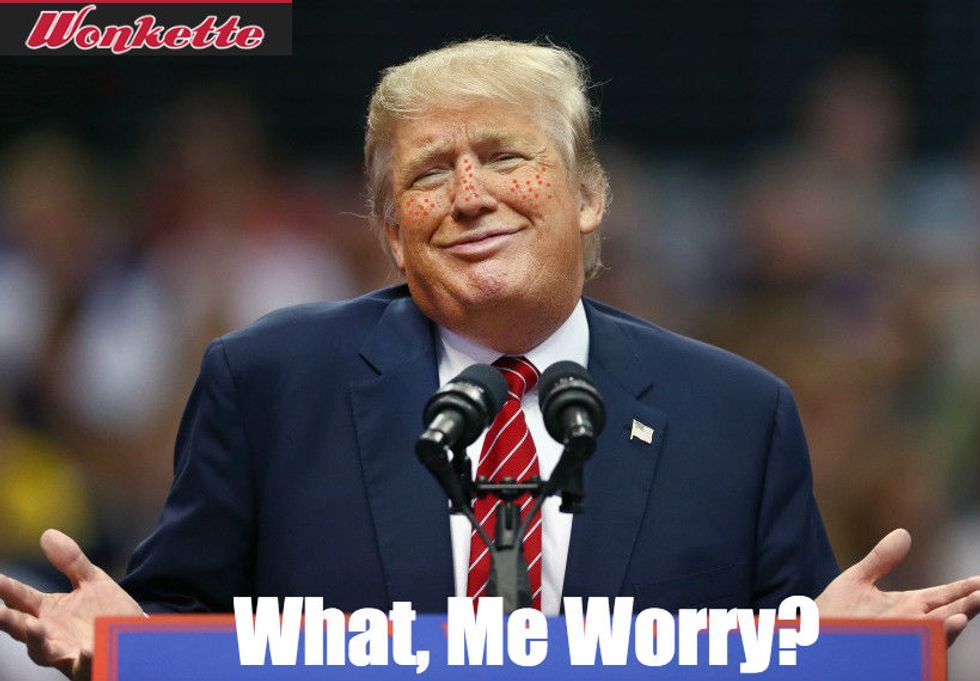 Have I got an idea for the furshlugginer national debt!

An extensive investigation by USA Today -- which we know sounds like an oxymoron -- finds that Donald Trump has been accused by literally hundreds of people of stiffing them on payments, in "60 lawsuits, along with hundreds of liens, judgments, and other government filings." Imagine that! It's a shame the story doesn't include a feather with which to knock yourself over. Who exactly has the Republicans' pick for president failed to pay? Who HASN'T he failed to pay!

Among them: a dishwasher in Florida. A glass company in New Jersey. A carpet company. A plumber. Painters. Forty-eight waiters. Dozens of bartenders and other hourly workers at his resorts and clubs, coast to coast. Real estate brokers who sold his properties. And, ironically, several law firms that once represented him in these suits and others.

Trump’s companies have also been cited for 24 violations of the Fair Labor Standards Act since 2005 for failing to pay overtime or minimum wage, according to U.S. Department of Labor data. That includes 21 citations against the defunct Trump Plaza in Atlantic City and three against the also out-of-business Trump Mortgage LLC in New York. Both cases were resolved by the companies agreeing to pay back wages.

It's possible Trump has stiffed more people than he's even able to name and insult on Twitter. Those lawsuits and other filings don't even include another category of complaint USA Today found:

more than 200 mechanic’s liens -- filed by contractors and employees against Trump, his companies or his properties claiming they were owed money for their work -- since the 1980s. The liens range from a $75,000 claim by a Plainview, N.Y., air conditioning and heating company to a $1 million claim from the president of a New York City real estate banking firm. On just one project, Trump’s Taj Mahal casino in Atlantic City, records released by the New Jersey Casino Control Commission in 1990 show that at least 253 subcontractors weren’t paid in full or on time, including workers who installed walls, chandeliers and plumbing.

Some hero of the beleaguered little guy, huh?

This is one of those brutal catalogs of malfeasance and pure assholery that simply leaves you whomperjawed, reading down the screen and saying "Oh my god, REALLY?" over and over again, even though you already know it's Donald-for-fuckssake-Trump and none of this should be surprising. We'd make a bullet-pointed list of the highlights, except that it's all terrible and the list might end up as long as the USA Today piece. The really astonishing thing? This is the guy who likes to claim he's worth $10 billion -- but often skips out on his bills. Rather than do honest business, Trump often prefers to simply walk away and let the lawyers deal with the mess. And after that, sometimes Trump even stiffs the lawyers. It could be Trump simply gets a charge out of being an asshole.

In some cases, the Trump teams financially overpower and outlast much smaller opponents, draining their resources. Some just give up the fight, or settle for less; some have ended up in bankruptcy or out of business altogether.

Mind you, Donald Trump doesn't see the big deal. He's a businessman with an empire to run, and why should he let people rip him off by demanding to be "paid" for their "work"? If they want to make a go of business, they should learn his lesson and be born into enormous wealth so they can have as many businesses fail as they want and still be seen as a success. Trump, in an interview that daughter Ivanka helped with since someone with a functioning brain needed to be there, explained to USA Today why sometimes it's necessary to rip off contractors:

If a company or worker he hires isn’t paid fully, the Trumps said, it’s because The Trump Organization was unhappy with the work.

That should send a chill down the spine of anyone contracting to do work for the Trump campaign or this summer's Republican convention. Demand cash up front, people!

Trump offered his usual dismissal when confronted with stories about things he'd rather not talk about: All that stuff happened "a long time ago." Which is only true from the perspective of a fruitfly: In May, Trump Miami Resort Management LLC settled a complaint from 48 servers at the Trump National Doral Miami golf resort for unpaid overtime. A lot of it:

The settlements averaged about $800 for each worker and as high as $3,000 for one, according to court records. Some workers put in 20-hour days over the 10-day Passover event ... Trump’s team initially argued a contractor hired the workers, and he wasn’t responsible, and counter-sued the contractor demanding payment.

And then there's The Paint Spot, a Florida paint company that did work at the Doral two years ago and is still trying to get Donald Trump to pay his bill. Owner Juan Carlos Enriquez first filed a lien against the golf course, then sued:

In courtroom testimony, the manager of the general contractor for the Doral renovation admitted that a decision was made not to pay The Paint Spot because Trump “already paid enough.” As the construction manager spoke, “Trump’s trial attorneys visibly winced, began breathing heavily, and attempted to make eye contact” with the witness, the judge noted in his ruling.

That, and other evidence, convinced the judge The Paint Spot’s claim was credible. He ordered last month that the Doral resort be foreclosed on, sold, and the proceeds used to pay Enriquez the money he was owed. Trump’s attorneys have since filed a motion to delay the sale, and the contest continues.

And on and on. There's the family cabinetry firm that eventually folded because Trump refused to pay $83,600 for slot machine bases, bars, and registration desks at Harrah's at Trump Plaza in Atlantic City. The dishwasher at Mar-A-Lago who had to sue to get paid for three years of unpaid overtime and eventually settled for $7,500. The real estate broker who handled hundreds of millions of dollars worth of property for Trump, but says she was shorted $735,212 in commissions on deals between 2009 to 2012 -- as far as she could tell, Trump's refusal to pay was "based on nothing more than whimsy.” The glass company owed over $1.5 million for work at the Trump Taj Mahal in Atlantic City, and who joined between 100 and 150 other small contractors to negotiate something better than the 30 cents on the dollar Trump was offering for the completed work. The cheap bastard even refused to pay his own lawyers at times.

But Trump says he only refused to pay people who did crappy work. Are we really supposed to believe 150 contractors did substandard work? (No, we are supposed to shut up and not ask.) Even if that unlikely claim were true, wouldn't it suggest Trump is a crappy builder who hires a hell of a lot of crappy subcontractors? Not to worry, Donald and Ivanka told USA Today:

In the interview, Trump said that complaints represent a tiny fraction of his business empire and dealings with contractors and employees, insisting all are paid fairly. “We pay everybody what they’re supposed to be paid, and we pay everybody on time,” he said. “And we employ thousands and thousands of people. Okay?”

Sure, all businesses have dissatisfied customers or contractors -- part of doing business. But other large companies, especially the ones not run by sociopaths, seem to manage to pay their bills. It's how capitalism works, we hear, although the concept appears foreign to Donald Trump:

Developers with histories of not paying contractors are a very small minority of the industry, said Colette Nelson, chief advocacy officer of the American Subcontractors Association. But late or missing payments can be devastating for small businesses and their employees.

“Real estate is a tough and aggressive business, but most business people don’t set out to make their money by breaking the companies that they do business with,” she said, stressing she couldn’t speak directly to the specifics of cases in Trump’s record. “But there are a few.”

We'll assume she silently drew a "T" in the air and rolled her eyes as she said that.

Go read the whole story. We have a feeling that, along with the unfolding saga of how Trump "University" systematically separated students from their money, this is going to be one of the most important pieces of journalism this campaign year. Do we want to put the presidency in the hands of a guy who clearly can't play SimCity without using the cheat codes?

We know how much Donald Trump enjoys nicknames, so let's see if we can't popularize one for him. Based on this and many other stories of his financial irresponsibility, how about we try to make "Deadbeat Donald" stick?