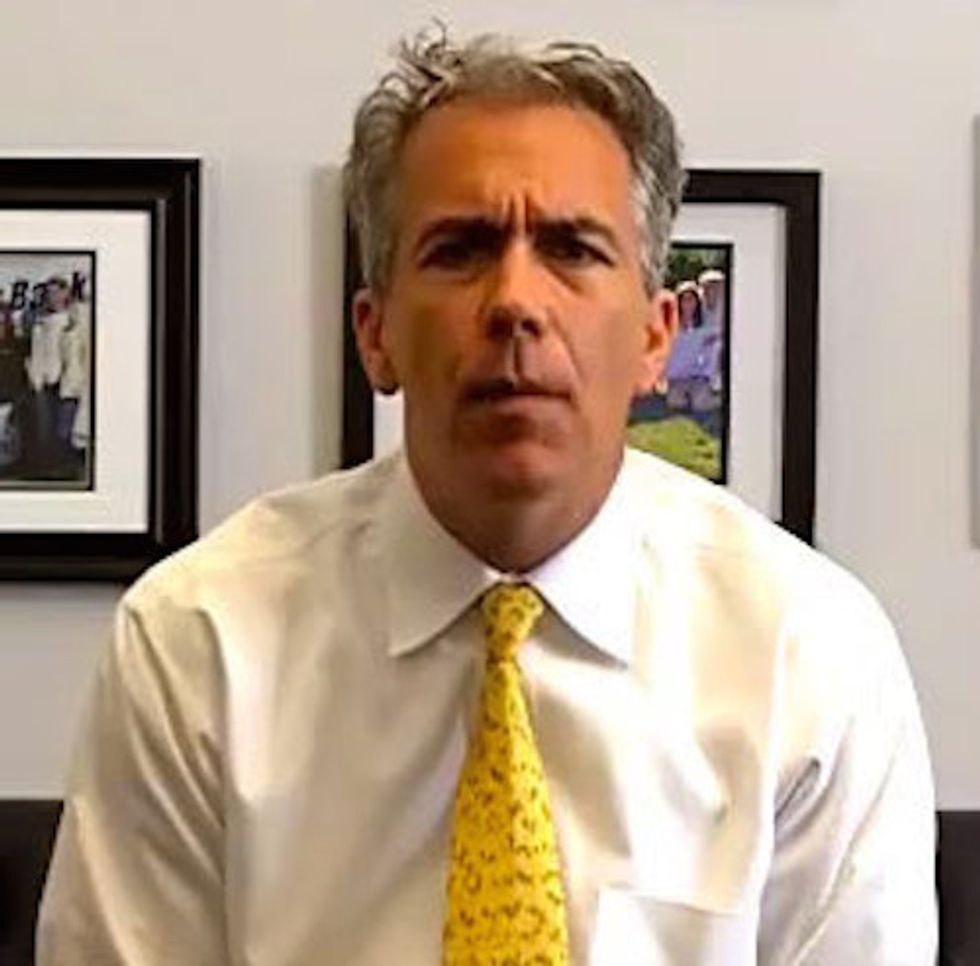 Once a scumbag, always a scumbag.

It's important to remember that Joe Walsh, the race-baiting former congressman from Illinois whose first reaction to the shootings of police officers in Dallas was to send a now-deleted tweet declaring "war" against President Obama and Black Lives Matter, didn't simply start spouting horrible garbage with Dallas.

We should keep in mind that he's always been awful, which is why Illinois voters shitcanned him in 2012 in favor of a decent human being, Democrat and genuine war hero Tammy Duckworth, whose high-tech prosthetic legs are more capable of empathy than Joe Walsh. Let's look back at Walsh's illustrious career of public horribleness, shall we?

In 2012, Tammy Duckworth kicked his ass with her robot feet, and votes; it probably didn't help that Walsh couldn't stop mocking her military service, which she was not entitled to talk about so much, because it was unseemly, and maybe unfair to Walsh, who didn't have the advantage of having a helicopter shot out from underneath him in Iraq. He also thought it was pretty funny she went shopping for a dress.

[wonkbar]<a href="http://wonkette.com/526953/deadbeat-dad-joe-walsh-rewrites-i-have-a-dream-speech-to-count-the-ways-black-people-suck"></a>[/wonkbar]After his loss to Duckworth, Walsh went on the Wingnut Welfare circuit, and got a job as a radio talker, an important public trust which he used to condemn Michelle Obama for saying she was "heartbroken" over the death of a little girl who had twirled a baton at the 2013 inauguration -- because obviously that meant the First Lady didn't care about any other children shot in Chicago. He also rewrote Martin Luther King's "I Have a Dream" speech to catalogue every possible way black people suck:

[Trigger warning for JESUS THIS GUY]

I have a dream that all black boys and girls will grow up with a father [Yes, the deadbeat dad wrote that] …

You see? He cares about The Blacks, and wishes they'd all stop acting like such racist stereotypes spewed by some old white racist.

In 2014, Walsh was literally martyred on his radio show, and literally bled all over the First Amendment, when he was sent home after making an important point about political correctness and free speech. By saying the words "nigger" and "spick" as many times as he could, to prove...something about how the name of the Washington DC football team isn't offensive, not at all. And then he took to Twitter to continue His Struggle (maybe he could write a book!):

[wonkbar]<a href="http://wonkette.com/595814/former-deadbeat-congressjerk-solves-black-americas-problems-twitter"></a>[/wonkbar]He was really sad about all the hypocrisy in our media, where people don't seem to recognize that all words are exactly equal in their impact. Happily, by 2015, he was ready to start sharing his wisdom with the black community again, because he cares so much and wants them to succeed:

So you see, Joe Walsh hasn't always wanted to go to war with Barack Obama and The Blacks. It's simply that this time, they pushed him too far, and he's no longer in quite the benevolent loving mood he had been previously.

So, what to be done with Joe Walsh, the disgraced deadbeat former congressmen who wishes it was OK to say "nigger" with impunity and go to war with his fellow Americans (subhuman though they may be)? Thankfully, the internet has a solution. Some wag has started a "We The People" petition on the White House website, calling for clemency for Walsh, a far more merciful stance than anything he's said in years:

Former Congressman Joe Walsh unequivocally threatened the life of President Barack Obama on July 7, 2016, a class E felony. In keeping with this administration's advocacy of second chances, the President should pre-emptively pardon Joe Walsh for his crime, in a spirit of healing for the country.

So far, it has one signature. Seems about right.