Dear FBI: ARE YOU F*CKING KIDDING???? 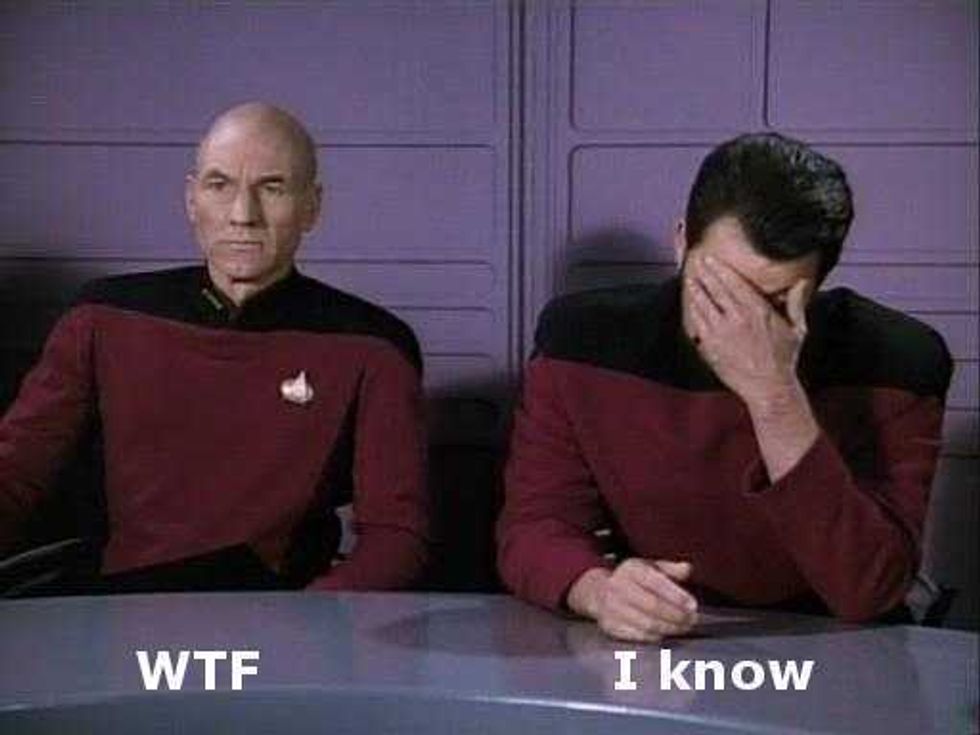 On Monday, the FBI records vault released heavily redacted files about the "William J. Clinton Foundation," specifically about the former president and future First Clenis's pardon of financier Marc Rich, at the end of his second term in office. It's an old case in which investigators found no wrongdoing, and the newly released files themselves are ... ??? ... which makes them approximately as vague as the love note James Comey sent to members of Congress about how he has a secret stash of Hillary Clinton 'n' Huma Abedin emails in his office that he is (allegedly) whackin' it to right now.

The document release went relatively unnoticed until whoever works the Twitter machine at the J. Edgar Hoover building in DC decided to tweet it Tuesday afternoon:

[wonkbar]<a href="wonkette.com/608106/hot-take-maybe-james-comey-is-stupid-and-craven-and-terrible-and-the-worst"></a>[/wonkbar]Now, as Politico reports, there was indeed a proper FOIA request for these documents. (Maybe it was made by Jim Comey's wife, because we hear she's real mean to him when he doesn't crucify the Clintons enough. OR MAYBE RUSSIA GETS TO FILE FOIA REQUESTS IN COMEY'S FBI.)

Hillary Clinton's campaign is responding to this like, "WTF, HOW ARE YOU EVEN?" Was there some deadline for the release of these documents, that just HAD to be right now? And if not, is there a good reason the FBI is just casually dropping this onto Twitter seven days before the election? From Hillary Clinton's press secretary, Brian Fallon:

Haha, the Trumps were actually charged for that! Like we said, Bill Clinton wasn't charged for this other thing. HMMMM! (For the record, the FBI records vault did release a thing on old Fred Trump at the beginning of October. It was a newspaper article clipping.)

If you can't remember who or what a "Marc Rich" was (he died in 2013, but we don't think the Clintons body counted him), Talking Points Memo does the yeoman's work of reminding us of what he did, how Bubba pardoned him, and who oversaw his case:

[James] Comey was at the heart of the scandal that erupted from Clinton’s 2001 pardoning of Rich, a financier who lingered on the FBI’s most-wanted list for 16 years for criminal charges including tax evasion, wire fraud and trading with Iran during the oil embargo. Comey oversaw Rich’s prosecution between 1987 and 1993, before later taking over an investigation into then-President Clinton’s decision to grant Rich a pardon on his last day in office. He ultimately decided not to pursue that case.

You'll pardon us if right now the mental picture we have of James Comey, who was U.S. Attorney under George W. Bush, is of a hissing rat standing in a corner, furious about how he's been suffering with Clinton-onset rabies all these many years.

As we noted above, these newly released documents don't say much of anything, other than it looks like the FBI was pissed the "required pardon standards and procedures were not followed" in Marc Rich's case, by which they mean it didn't go through the Department of Justice but instead "directly to the White House," as reported by Politico. Of course, outgoing presidents can pardon whomever the hell they want, so, ya know.

Now, there could be a real good reason this came out now, like, as Brian Fallon suggested, a FOIA deadline. Or maybe Comey's FBI is going completely rogue, and they're pathetically desperate to vomit out any kind of vacuous innuendo they possibly can about the Clintons, since again, these files DON'T FUCKING SAY ANYTHING.

Maybe Comey has actually lost control of the institution he runs. As the Wall Street Journal reported this weekend, there's been a mighty feud a-brewin' between FBI headquarters and the New York office, which has a ridiculous hard-on for going after the Clinton Foundation, even though it's been told repeatedly that the case it's pursuing is a big nothing. Maybe retired assistant director of the FBI James Kallstrom was right when he said Comey is throwing all this out his ass right now because the "locals would have stepped in on this" if he didn't, and by "locals" he means the New York office, which seems to be out of fucking control, to be honest.

Whatever it is, we think it's time for Jim Comey's boss Attorney General Loretta Lynch (who reportedly had a nice coffee chat with Comey on Monday about everything that's been going on -- she even asked him afterward "how he is doing overall," according to CBS, because SHE CARES) to pay a visit to the FBI and start diplomatically inserting her foot up folks' asses.