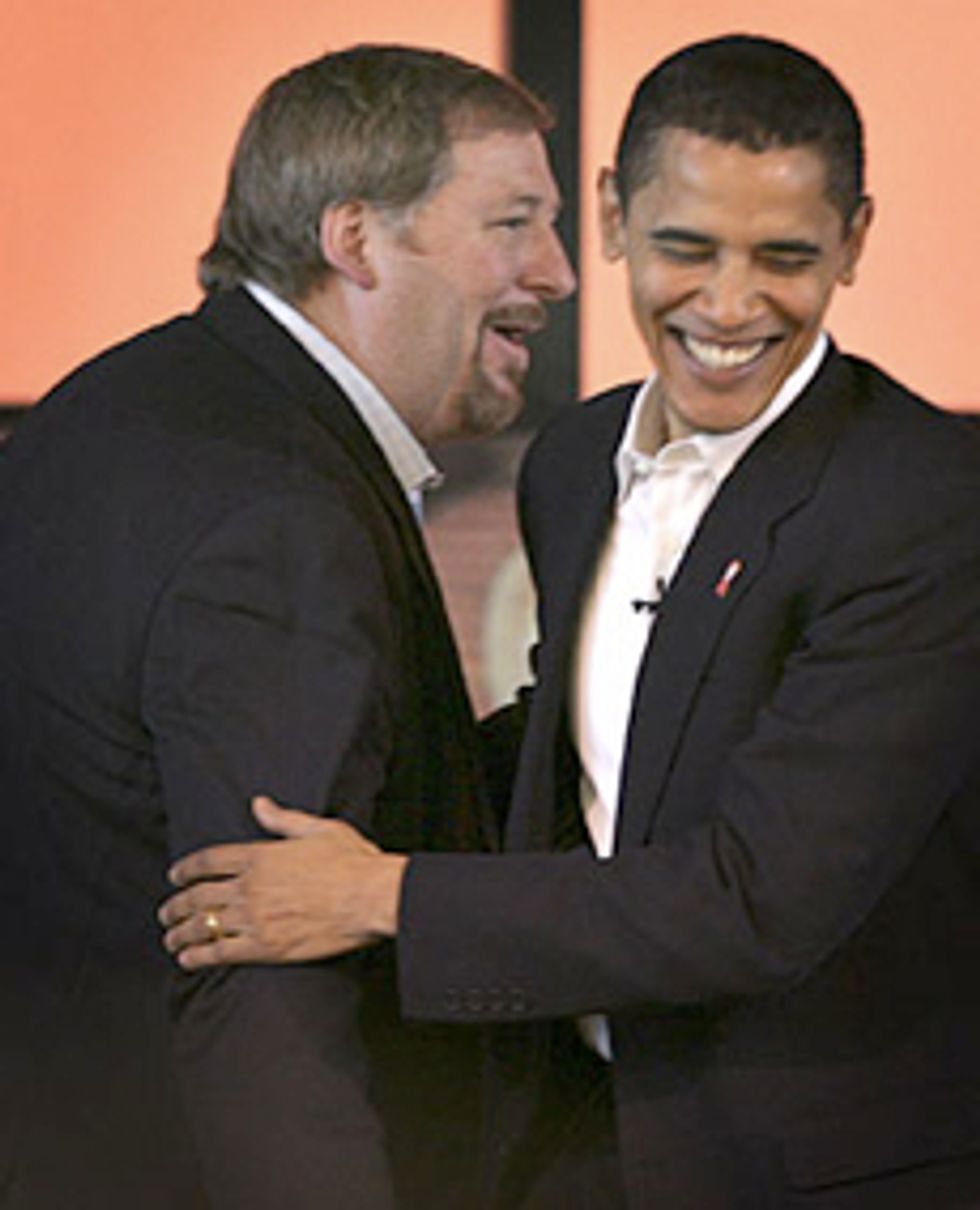 So Barack Obama, in the spirit of Christian charity and forgiveness,invited Pastor Rick Warren to deliver the invocation at his inaugural. (Rick Warren is the man who humiliated Barack Obama by forcing him to admit publicly that he is not a professional abortionist. Also Rick Warren hates the gays, who hate him back.) Now a series of "talking points" have surfaced, in the inbox of Huffington Post supersleuth Sam Stein, defensively defending Obama's decision to give this goateed turd a speaking spot.

Basically, the Obama people have to argue that they're being "inclusive" by giving a platform to this terrible weenie, and also they invited a token liberal pastor as well.

• This will be the most open, accessible, and inclusive Inauguration in American history.

• In keeping with the spirit of unity and common purpose this Inauguration will reflect, the President-elect and Vice President-elect have chosen some of the world's most gifted artists and people with broad appeal to participate in the inaugural ceremonies.

• Pastor Rick Warren has a long history of activism on behalf of the disadvantaged and the downtrodden. He's devoted his life to performing good works for the poor and leads the evangelical movement in addressing the global HIV/AIDS crisis. In fact, the President-elect recently addressed Rick Warren's Saddleback Civil Forum on Global Health to salute Warren's leadership in the struggle against HIV/AIDS and pledge his support to the effort in the years ahead.

• The President-elect disagrees with Pastor Warren on issues that affect the LGBT community. They disagree on other issues as well. But what's important is that they agree on many issues vital to the pursuit of social justice, including poverty relief and moving toward a sustainable planet; and they share a commitment to renewing America's promise by expanding opportunity at home and restoring our moral leadership abroad.

• As he's said again and again, the President-elect is committed to bringing together all sides of the faith discussion in search of common ground. That's the only way we'll be able to unite this country with the resolve and common purpose necessary to solve the challenges we face.

• The Inauguration will also involve Reverend Joseph Lowery, who will be delivering the official benediction at the Inauguration. Reverend Lowery is a giant of the civil rights movement who boasts a proudly progressive record on LGBT issues. He has been a leader in the struggle for civil rights for all Americans, gay or straight.

• And for the very first time, there will be a group representing the interests of LGBT Americans participating in the Inaugural Parade.

Remember how Bill Clinton had a very "inclusive" inauguration, with Maya Angelou and snake-charmers and NAMBLA all doing peyote and dancing around Ronald Reagan's funeral pyre? That's basically what Obama's inauguration will be like, only with a diverse array of hairfaced hobbit cretins rubbing their nipples while they fantasize about gay marrying Jesus.