Deleted Comments AND Bonus Sunday Puzzler: Donald Trump Is No Racist! He Gave Millions To Charity! 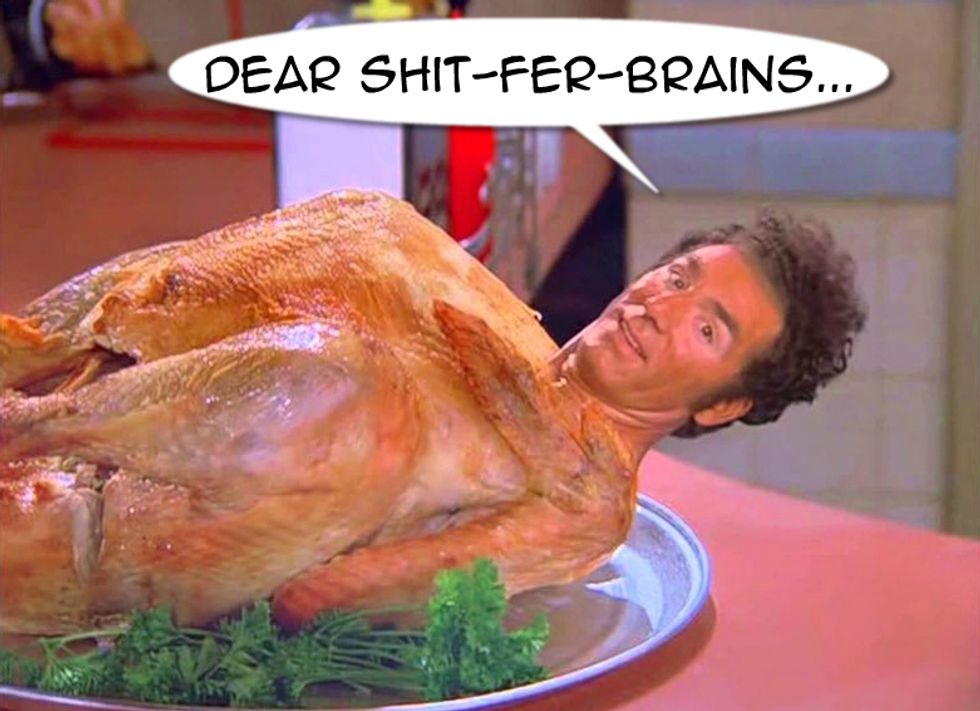 Happy Thanksgiving! Maybe we shoulda gone with a pony?

Happy weekend before Turkey Day, or as we may call it in the future, The Last Thanksgiving. We have us a fine barrel of Stupid today, consisting of -- if it's not too recursive -- an angry reply from "Alti," who took exception to last week's Dear ShitFerBrains and its headline, "Trump’s Not Racist, And You’re Going To The Ovens." Alti treated us to two versions of this longish list, the second with a bunch of links, so we figured it was only fair to share it with you kids, as proof that Donald Trump isn't racist. Also, consider it your Sunday Puzzler: We've already debunked a couple of 'em, so we'll let you commenters crowdsource the fact-checking on the others!

(1) In 1986, Trump prevented the foreclosure of Annabell Hill’s family farm after her husband committed suicide on the day of the auction. He personally called to stop the sale and gave Hill $77,000.00 to pay off the mortgage. Trump decided to do this after seeing her pleas for help in the news. Daily Mail

(2) In 1988, a commercial airline refused to fly Andrew Ten, a sick Orthodox Jewish child with a rare illness, cross-country for medical care because he had to travel with an elaborate life-support system. His grief stricken parents contacted Trump for help and he didn’t hesitate to send his own plane to take the child from L.A. to New York so he could get treatment. Citizen Analyst

(4) In 1991, 200 Marines who served in Operation Desert Storm spent time at Camp Lejeune in North Carolina before they were scheduled to return home to their families. However, the Marines were told that a mistake had been made and an aircraft would not be able to take them home on their scheduled departure date. When Trump got wind of this, he sent his plane to make two trips from North Carolina to Miami to safely return the Marines to their families. Sean Hannity

(5) In 1991 Trump saved a man from a mugging. He told his limo driver to pull over and he confronted the mugger, who was beating the other man with a baseball bat. After that, the mugger recognized Trump and ran away. Gateway Pundit

(6) In 1995, a motorist stopped to help Trump after the limo he was traveling in got a flat tire. Trump asked the Good Samaritan how he could repay him for his help. All the man asked for was a bouquet of flowers for his wife. A few weeks later Trump sent the flowers with a note that read: “We’ve paid off your mortgage.” Political Insider

(7) In 1996, Trump filed a lawsuit against the city of Palm Beach, Florida accusing the town of discriminating against his Mar-a-Lago resort club because it allowed Jews and blacks. Abraham Foxman, who was the Anti-Defamation League Director at the time, said Trump “put the light on Palm Beach – not on the beauty and the glitter, but on its seamier side of discrimination.” Foxman also noted that Trump’s charge had a trickle-down effect because other clubs followed his lead and began admitting Jews and blacks. Wall Street Journal

(9) In 2000, Maury Povich featured a little girl named Megan who struggled with Brittle Bone Disease on his show and Trump happened to be watching. Trump said the little girl’s story and positive attitude touched his heart. So he contacted Maury and gifted the little girl and her family with a very generous check. YouTube

(11) After 9/11, Trump "learned about Clyde Frazier Jr., who ran the Harlem Hoops tournament in the inner city and was killed in the 9/11 attacks" and "searched down the family and donated the money to keep that tournament going.” Conservative Tribune

(12) In 2007, Trump sued the city of Palm Beach for fining him for having a tall flagpole w/ the American Flag. The case settled. Trump donated the $100,000 settlement proceeds he received to Iraqi War Veterans and his local VA hospital. [While we were in Iraq, he also let military members use his Mar-a-Lago resort for free every Monday].

(13) In 2008, after Jennifer Hudson’s family members were tragically murdered in Chicago, Trump put the Oscar-winning actress and her family up at his Chicago hotel for free. Trump even hired extra security for her – he said: “She’s a great girl. And we’re protecting them well. They are very safe.”

(14) In 2008, Ed McMahon’s house went into foreclosure. Trump purchased it and allowed Ed to continue living there. Business Insider

(15) In 2011, Trump & his siblings gifted $1 million to a hospital that treated their parents.Hospital for Special Surgery

(16) In 2013, New York bus driver Darnell Barton spotted a woman close to the edge of a bridge staring at traffic below as he drove by. He stopped the bus, got out and put his arm around the woman and saved her life by convincing her to not jump. When Trump heard about this story, he sent the bus driver a $10,000 check simply because he believed his good deed deserved to be rewarded. Fox News

(17) In 2014, Trump gave $25,000 to Sgt. Andrew Tamoressi after he spent 7 months in a Mexican jail for accidentally crossing the US-Mexico border. President Obama couldn’t even be bothered to make one phone call to assist with the Marine’s release; however, Trump opened his pocketbook to help this serviceman get back on his feet. Political Insider

(18) In 2016, Melissa Consin Young attended a Trump rally and tearfully thanked Trump for changing her life. She said she proudly stood on stage with Trump as Miss Wisconsin USA in 2005. However, years later she found herself struggling with an incurable illness and during her darkest days she explained that she received a handwritten letter from Trump telling her she’s the “bravest woman, I know.” She said the opportunities that she got from Trump and his organizations ultimately provided her Mexican-American son with a full-ride to college. Daily Mail

(19) Lynne Patton, a black female executive for the Trump Organization, released a statement in 2016 defending Trump against accusations that he’s a racist/bigot. She tearfully revealed how she struggled with substance abuse/addiction for years. She said Trump and his entire family loyally stood by her through “immensely difficult times” and helped her keep her job. Breitbart.com

Wow! That's some list! Let's take a quick look at how convincingly it proves that Donald Trump is Not A Racist! We don't have time to do a full examination of every item on the list, but we bet you readers will have some fun with them, in the comments we do not allow. First off, a few observations: A whole bunch of these stories have exactly fuck-all to do with race: The farmer lady in item #1 is white; and while Mother Jones verifies the story, it also notes Trump paid only half the outstanding mortgage -- then flew the family to New York for a full-on publicity stunt to burn the mortgage. Let's see about some of the others!

Item #2, which Snopes has verified as true, could definitely be used to argue Trump doesn't hate sick Jewish kids. Good for him. He also bragged about it in one of his books.

Item 3: Ryan White was definitely not a member of a minority group. It's nice that Donald Trump called his parents.

Item 4: The Marines were probably a whole bunch of different races, but it doesn't matter, since the basic story is bullshit: Trump never sent his personal plane to rescue any stranded Marines. Rather, Trump had leased several unused Trump Shuttle jets to the Air Transport Command, and it was one of those, paid for by the Pentagon, that picked up the Marines. It was purely random, and could just have well been a United jet. Trump made a profit on the rental, but Trump Shuttle tanked.

Item 5: Doesn't say anything about race; the Gateway Pundit link is to a Philadelphia Inquirer article that's paywalled, so we're not going to look at that; the story was also written up by the New York Daily News, which features Trump's "reluctant" first-person account of the supposed rescue, as well as one witness who said Trump got out of his limo to see why a crowd had gathered, then left without intervening, plus another who said yes, Trump helped out. The article notes there was no police report on the mugging. Gee, could this be Donald Trump engaging in a bit of self mythologizing?

Oh, and Item 6? Pure urban legend, according to Snopes (and also, hey-presto! NOT ABOUT RACISM). We'll let you guys play with the rest and then compile a longer response to Alti's list. We should add that we've already done articles on Item 7 and Item 12. That flagpole settlement is one of our favorites -- no, Trump didn't receive a $100K settlement and donate it to charity; he used $100K from his foundation to pay for his own damned legal settlement, a clear instance of "self-dealing," and a definite no-no under IRS rules governing charities.

We should note that "Alti" was very upset at getting banhammered, dropping by to add

BLOCK me for no reason then keep responding like you are BIG TIME intellectuals. LOL. You couldn't stand one iota of respectful dissent - cowards.

OK, so we've taken care of a big chunk of Alti's list for you; we'll let you play with the rest. Remember to check to see whether the stories are 1) True and B) whether they in any way disprove the notion that Donald Trump is kind of racist, like whether they're enough to outweigh all the housing discrimination, for instance. And remember, Washington Post reporter David Fahrenthold has already done a lot of your homework for you!

Happy Thanksgiving, and good luck with your research!