Deleted Comments: Don't You Backwardass Imbreds Understand Liberty At All? 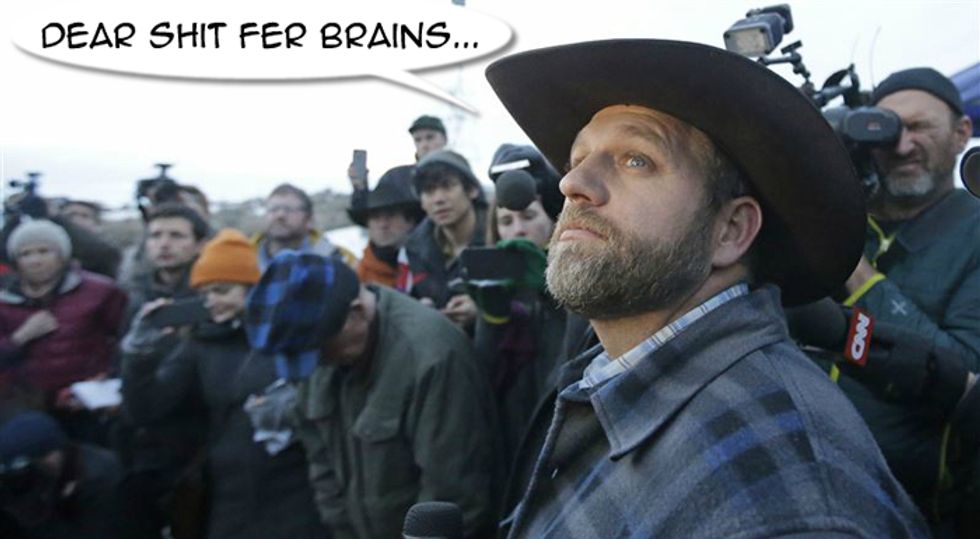 Freedom's just another word salad for nothing left to say

It took a while, but we finally started hearing from the Ammon Bundy Freedom-N-Liberty-N-Armed Insurrection Fan Club, and they are every bit as nice as you'd expect! Consider this thoughtful critique of our coverage, from "TonyinMO," who took issue with our story on the Frito Bunditos' decision to turn down the local sheriff's offer of safe exit from the state if they'd just get the hell out:

I never seen a bigger group of ignorant know nothings than the author of this article and the majority of the backwardsass imbreds in the comment section. Do any of you fucktards understand the definition of liberty?

So your idea of liberty is being told what to do by the federal government?

[contextly_sidebar id="DcSTHLrn8EvGIjl96OjA0zjJYq9NbjWN"]We'll have to grant him that one. We never seen even a single Backwardass Imbred at all. Perhaps that's one of the rare avian species at the wildlife refuge the Band of Bothers has been illegally occupying.

In reply to another comment (which we do not allow) TonyinMO also explained a few other things about the Constitution and America and Freedom to us, and he got angrier than a backwardass imbred at somebody else's typo, too:

The federal govt. doesn't own jack shit, it's owned by the people. Maybe one day you'll understand just how a republic works and what the 2nd amendment is all about. Until then remain stupid and get yourself spellcheck. "raisons" WTF kind of an uneducated fool are you?

"Owned by the people" means, of course, that The People can do whatever they want, especially if they have guns, which are what create actual freedom. Tony also linked, multiple times, to a very smart Facebook video in which a guy in a hoodie explains how the Lamestream Media lies to We The People all the time:

Still talking out your ass I see. Hard to take a moron like you serious. Here watch this and educate yourself.

(EDIT)You pussies can't handle the truth so the loser Wankette blocks me what a bunch of pussy trolls you are, enjoy your echo chamber, I suggest you all wear trash cans over your heads, you wouldn't want to accidentally come in contact with any knowledge.

Yep, that's us, a bunch of creeps who can't handle the truth, especially when it's shouted at us again and again. (To view the dumb embedded video below, you have to be logged into your FacePlace account -- thanks a lot, Zuckerberg!)

Finally, possibly in reply to someone else or just out of sheer anger at how the Federal Government enslaves us all, TonyinMO complained about how those incompetent fools at the Missouri Dept. Of Social Services keep screwing up his Medicaid. We swear we are not making this up:

I think they sent all the Democrats that got voted out in the last election to answer the phones at the MO Dept. Of Social Services. Those idiots do everything in their power to deny you what little coverage Medicaid offers you.

My spend down is $575 per mo. Our lawmakers have really screwed this up I wish they would move out of state.

Keep Living Free, Tony. You magnificent Militia of One.

I would love to see the writer of this trash rag to go to Oregon and say things to the face of the ranchers.. It would be hilarious to watch the beating..

Get to it you gutless wonder. Man up. don't hide behind the keybord.

mike Hunt was a pretty tough talker, as befits a tough man who calls out others for hiding behind a keybord while presumably using some other less cowardly input device. Maybe he shoots at letters on a big titanium keybord. (Hmmm... a keyboard operated by shooting at it. Better get on that patent application!) When someone noted that he was likely to win a date with the Banhammer of Loving Correction (© and ™ John Scalzi), he offered to beat up the blog moderators, too:

Oh, scary.. banned from a worthless libtard rag that no one but a few of you retard read..Tell Banhammer to come meet me., I will teach him how it really works.

Thanks for the offer, mike. We're already quite familiar with how the Disqus moderation dashboard works, as you have no doubt noticed. But we appreciate your willingness to be an educational asset to the community.

Soon, mike was explaining that we need to let ranchers graze their already highly subsidized cattle on public land for free, and maybe in wildlife sanctuaries too, because it's a matter of simple economics and we are SO DUMM, not to mention all on welfare:

[contextly_sidebar id="Oze8qDesBvsW2UOJqXuODqDWrDjYJ5yl"]And finally, on a non-Bundy topic for a change, our story on Iran's release of several American prisoners brought in "Randy," who unleashed an impressive string of non sequiturs before being sent to the Memory Hole. He offered a number of trenchant observations on the current political scene; what's impressive is that while they may appear to be replies to other comments, they were posted as standalone comments, either because they were free-floating thoughts, or because Randy couldn't find the "reply" button and simply wrote his replies in the "join the discussion" box at the top of the page:

We like that last one: He's not racist, he's wearing a black t-shirt! HAW HAW HAW!

Randy did manage to hit "Reply" a few times, which is an encouraging sign that even the simplest primates can learn. His replies tended not to make much sense, but they were at least correctly placed. When one reader complained that Randy "can't use proper grammar," Randy replied "To much pc." Apparently any form of correctness is political correctness, which must be shunned. He said pretty much the same thing when someone else pointed out that Randy was repetitious, couldn't spell, and "just ain't very bright." Randy's comeback? "Like PC matters tard."

You know you've got a diehard Trump supporter when he's dead set against "PC" and has no fucking idea what it even is.

We'll close with our favorite, in which a frustrated commenter got tired of Randy's offenses against basic English and posted this short clip of Samuel L. Jackson making an impassioned plea for literate discourse:

Must be. There's a black guy yelling, it must be racist. Shame on us. We bet Randy would never say that to Samuel L. Jackson's face instead of hiding behind a backwardass imbred keybord.