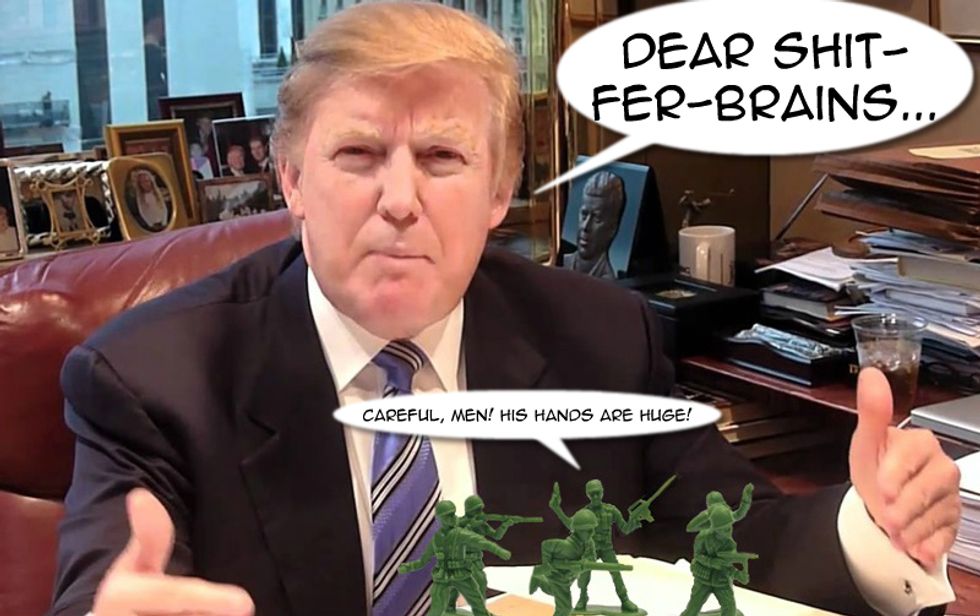 We checked. It's not from a .gov email address.

Oh, ye Wonkers, we have some fine thoughts from deleted commenters today! But we also have a cough that keeps threatening to send a lung skittering halfway across the apartment, and we hate that, so today's Dear ShitFerBrains will be a bit abbreviated. We're sure you'll enjoy the rich fantasy life of one of our banhammered guests, one "William Blair," who sadly left his comments set to private, because we bet he's produced some real dillies elsewhere. "William Blair" was not one bit pleased with our incredibly biased and loosely sourced piece about how Lord Dampnut was actually incorrect (yet again) when he claimed to a reception of Congressional leaders that 3 to 5 million people voted in the 2016 election. "William" only managed two comments on the post before walking headlong into the Banhammer of Loving Correction (© and ™ John Scalzi). That's just how afraid of the truth we are, honestly.

The first took issue with the completely unreliable source Evan used for his laughable claim that Hillary Clinton won the popular vote by about 2.8 million votes: a couple of rinky-dink little operations called the New York Times and the Washington Post. Why on earth should anyone believe Yr Wonkette when it makes broad claims about the electoral outcome, based on such flawed sources? Then Mr. "Blair" goes on to explainer to us how journamalism should REALLY work:

BS. The sources this article references, heavy Dem bias. Question: Did the sources, did the author investigate every city, every town and village in every state and territories of this union - doubtful. Who is/are the liar(s)?

Hey, Did Everybody Hear Donald Trump Lost The Popular Vote? LET'S TALK ABOUT IT AGAIN!

He lost it. Bigly.

Oh, actually, we think we have an answer! Dear "William Blair": Have you actually found any evidence of three million to five million illegal votes by investigating every city, every town and village in every state and territories of this union? DOUBTFUL.

In reply to alert Wonkette Operative "phoenix00," who asked if Fox News had personally investigated "every city, town and village in California, New York, Washington, and Oregon" to look for all that alleged voter fraud, Mr. Blair offered his very own plan for how to really conduct a fair election, in accordance with the REAL U.S. Constitution, a document that he may have composed by striking out and rearranging random words on a Dr. Bronner's soap bottle. Get ready, kids, it's a doozy:

No, that is not how it is done. Close the local Canadian border. Start at the northern most border of Maine. Take National Guard and an army of investigators; setup rolling Highway Patrol id checks -- laws are already on the books for dui checkpoints. Add deuce and a half trucks.

Seize Motor/voter registration, jail any politician who obstructs without bail (en communique) . Compare vote registration to polling registration; if found illegal immigrant -- go to the home or apartment and throw everybody into the back of the deuce and a half. Dead voting people -- the election board goes goes to jail.

Going state to state, this is called a line sweep from Northeast to Southwest (here comes the boom NYC). Sanctuary cities where illegals are determined to have illegally voted, the Mayor and City Counsel goes to jail. Any city or state in which records are destroyed, the archivist and the next two supervisors (man, woman, illegal) gets executed on the spot.

When the G Lakes can no longer be used as boundary, line sweep shall proceed as pivot extending down to Florida until a perpendicular line can be established for a western push. This push continues until the eastern most Texas/Mexican border. Then a reverse sweep from the Canadian border to encompass Cali while holding the southern border under direct military control. Meanwhile, secondary line surveillance of trains, planes, and automobiles to monitor relocations to jump the sweep line.

Interesting, in time of national emergence, all is forgiven -- no legal liability. Freeze and seize assets of all those who profit by the illegal markets. Can't have illegals driving back south in a Lexus with a trunk full of cash -- remember the principle of 'law', thou shall not profit by crime.

All this sounds kind of apocalyptic does it not, but lo and behold is this not the same concept Rosie 'O' was preaching. This is all very ludicrous is it not, just as ludicrous your tactic of Whac-a-Mole. Sounds good but meaningless. Can already sense tells of the creation of 'Underground railroads', news for you sunshine -- already exists.

That's some pretty good thinkering! We're pretty sure Mr. "Blair" had quite the stiffy while laying out his grand scheme. But he's got a point: Do that every two years, and we'll root out all the voter fraud, most elections officials, and a ginormous chunk of the military budget. We have a feeling "William Blair" has played this scenario out on his living room carpet with green plastic Army men, and probably has a PowerPoint presentation with maps and charts and everything. We're not sure he's really thought this all the way through, though -- we love that idea of searching every possible mode of transportation during the secondary sweep, but what if the frauders hide? Maybe add some no-knock searches (we started to type "warrants," but a plan this awesome wouldn't need no stinking warrants) and shoot-on-sight orders. If nothing else, this foolproof plan will certainly end unemployment, since roughly half the nation will be needed to search out the other half.

Oh dear. "William," you magnificent bastard! We just thought of a fatal flaw in your seamless plan to rescue the integrity of the vote and the sanctity of the Constitution: It would require a huge tax increase to pay for.

Ah, well, back to the drawing board.

Also, apologies to alert Wonkette Operative "mailman27," who was completely correct in suggesting we banhammered "William Blair" too soon:

Wait, wait, I don't think he said "intel" or "operational security" yet!

Wonkette regrets the oversight. But lives were on the line, there was a ticking bomb scenario, and enhanced banhammering was called for. We should have kept his oil, too.

Yr. Wonkettes also got good old-fashioned emails from unhappy readers this week. It's good to see that some people still respect traditional modes of communication. Yr Doktor Zoom received this important message from one "christopher smith," whose email address mentioned he enjoys golfing. Mr. Smith was quite displeased by our site, although he didn't mention any specific articles that raised his ire:

I was glancing at some of the articles at your site. It took about 60 seconds to realize this is just another Jew owned rag,and that you are another white person that loathes himself and will promote anything that is anti-white,you will support any race except your own. Of course you live in Idaho which is mostly white. One day try traveling to to the third world you want so badly to idolize. Then maybe you will understand you are a traitor to your country and your people. That your existence is based on lies you tell to people,lies you tell your spineless self.

It's pretty impressive the Mr. Smith could figure all that out in just 60 seconds. We are also now no more inclined to take up golf than we were at any time in the past. As to his specific critique, we have to admit we rather enjoy selling out our race to the Jews, because it has such an old-fashioned sound to it. We're not sure why visiting a third-world country would make us realize we're a traitor, but that's probably because we're so darn spineless.

Evan also received his very own note from a fan, someone with the name "Ed Harris," although we're fairly sure we didn't hear from the actor who was in The Right Stuff and Glengarry Glen Ross. Mr. Harris had some constructive criticism of his own:

I just wanted to tell you that I find your journalists articles to be foul, repulsive, extremely biased, and almost unreadable. No journalism here! Pure garbage!!!

Lucky Evan! He gets the succinct emails!