Deleted Comments From The President And Also Breitbart's Internet Home Of NO TREASON NO TREASON YOU'RE THE TREASON! 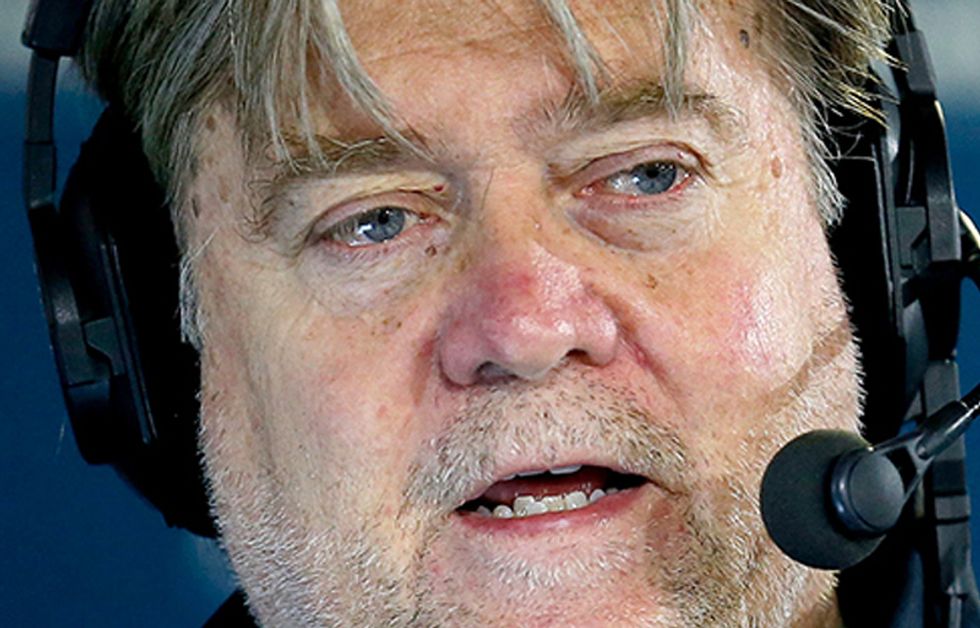 zoom in closer and you can see the trench that leads to the thermal port. That's your target, Luke.

Looks like Donald Trump -- or at least Stephen Miller, who channels the "president" when statements over 280 characters are necessary -- is not happy with former Majordildo Steve Bannon, who's quoted as saying all sorts of unkind things about Trumpland in Michael Wolff's upcoming book Everyone In The White House Smells Like Burning Hair. The White House issued this statement explaining that Steve Bannon was Just Some Guy who used to hang out there:

Steve Bannon has nothing to do with me or my Presidency. When he was fired, he not only lost his job, he lost his mind. Steve was a staffer who worked for me after I had already won the nomination by defeating seventeen candidates, often described as the most talented field ever assembled in the Republican party.

Now that he is on his own, Steve is learning that winning isn't as easy as I make it look. Steve had very little to do with our historic victory, which was delivered by the forgotten men and women of this country. Yet Steve had everything to do with the loss of a Senate seat in Alabama held for more than thirty years by Republicans. Steve doesn't represent my base -- he's only in it for himself.

Hahaha, Bannon "had little to do with" Trump's victory. That's good! Bannon and Trump, of course, both go back well past Bannon's official job with the campaign last summer, as Joshua Green detailed in his excellent Devil’s Bargain: Steve Bannon, Donald Trump, and the Storming of the Presidency, which we reviewed here. Bannon was a pet project of the super-rich Mercer family, and once Ted Cruz lost -- and thanks to Bannon -- so was Trump, who depended on Mercer money to get elected. Trump and Bannon actually met in 2011, if you want to get all technical about it; they were introduced by rightwing dickweasel David Bossie. And before Bannon started getting called "President Bannon," Trump thought he was a campaign genius, but now, he's nobody of course.

Steve pretends to be at war with the media, which he calls the opposition party, yet he spent his time at the White House leaking false information to the media to make himself seem far more important than he was. It is the only thing he does well. Steve was rarely in a one-on-one meeting with me and only pretends to have had influence to fool a few people with no access and no clue, whom he helped write phony books.

We have many great Republican members of Congress and candidates who are very supportive of the Make America Great Again agenda. Like me, they love the United States of America and are helping to finally take our country back and build it up, rather than simply seeking to burn it all down.

Huh! So Bannon did all the leaks? Isn't that the sort of thing Trump said people should go to jail for? We'll keep you posted on the upcoming prosecution of Steve Bannon, which should be happening in a short period of time now, maybe two weeks.

The readers of Dead Breitbart's Home for Perpetual White Fear -- helmed by once and present leader Bannon himself! -- aren't at all sure what to make of the news. The site ran two brief stories -- each credited only to "Breitbart News" in the byline so no poor Breitbart writer would get doxxed and SWATted -- with excerpts taken from the Guardian, and the readership is frightened and anxious to see Daddy Donald fighting Daddy Steve. Most, of course, come down on Trump's side, because, as reader "Orange_Crush_The _Liberal_Mind," put it, "I voted for Trump...I didn't vote for Bannon. I'll stick with Trump, thanks."

Others, like "BugBite," went further and wondered how Bannon could be so disloyal, especially since the whole Trump Tower meeting was a SETUP BY HILLARY CLINTON:

Bannon is really thinking that his carp does not stink and that HE is the KING of it ALL! What is wrong with this guy?

The meeting was NOT "treasonous" stupid maybe, but NOT treasonous! Trump Jr. and Jared had NO idea that they were BEING SET UP by the Clinton camp, which clearly they were. This Russian lawyer is so mixed up with the Clinton's it is not funny.

Looking for dirt on your opponent is 101.

"Teddi" took comfort in knowing that Michael Wolff is a big fake-news liberal who can't be trusted, and then found a Gateway Pundit story explaining the whole BOOK is fake because one of the people Wolff quotes -- not Bannon -- said he'd never said what Wolff quoted him as saying:

Look up the leftist author who wrote the book (Michael Wolff), look at the leftist rag (Guardian) that broke this at such a "convenient" time to distract.

Edit: It is fake and I'm pi**ed at Drudge for playing along with this...

Bannon is a moron and he should resign from Breitbart immediately. I had my suspicions after he picked Roy Moore over Mo Brooks and now it’s confirmed.

To be honest, I really think that Bannon is a deep state operator who has infilitrated MAGA-land to bring it down from the inside. Just look at his background. Georgetown, Harvard, Goldman Sachs, Hollywood producer (working on projects with the Weinstein’s) and was no where in politics until he stepped in the vacuum at Breitbart after Andrew died.

Others were certain the whole thing was a Fake News hoax (running on Breitbart, somehow), so they cited what's almost certainly a fake Twitter account (if this is really Steve Bannon, why would it have only 10 Tweets in its history?):

A surprising number -- OK, they're Trump voters; why would they pay attention to little details? -- thought Steve Bannon had written the book and was just trying to get rich off his former association with Trump.

And some folks refused to have their faith in either Bannon or Trump shaken:

Dumb leftists will fall for anything that gives them hope at this point. The pros are in deep dispair as they know they are being hunted...

I won't believe what's quoted of Bannon from this 'Book' until I hear it from him in a live one-on-one interview, otherwise this is most likely made-up and a pay-off from Trump's enemies.

LOL, watch the libtards get all excited over this only to be crushed again.

The left are in full retreat now as the story crumbles. Good times. They can go back to tweeting about the Kardashians soon.

Not sure if that last one meant that the story of the as-yet unpublished book has crumbled in the first few hours since the excerpts went online, or the Russia story, which was similarly debunked as soon as it broke.

One guy, who may have been a counter-troll, who can even tell any more, insisted that the White House statement was itself a fake, because it was released to the lying fake media:

Trump would have Tweeted, if he had wanted to clear the air. It's also NOT Trump's language. That much is obvious.

You'll find out soon enough. In the meantime, go back to reading more FakeNews ...