Deleted Comments: Guess Abortion Got Outlawed And We Completely Missed It 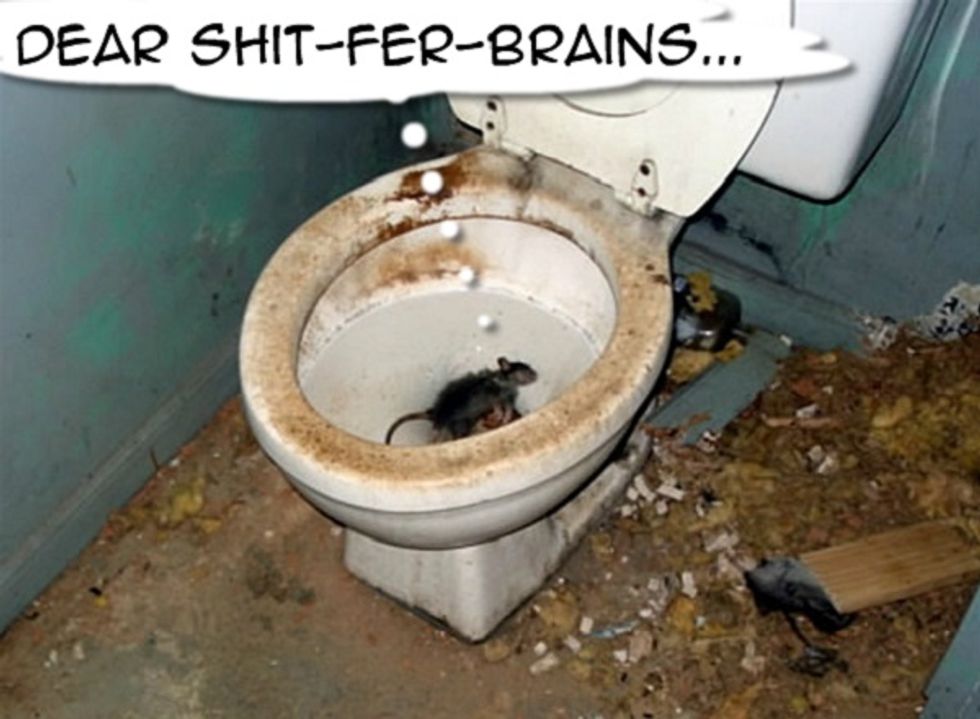 Yr Wonkette heard this week from "Jacob F.," an old poison-pen-pal whose delightful missives have helped pad out the old word-count since last January, when he first showed up in our comments to complain about liberal secularist perverts who have never read Shakespeare, because apparently literature departments are full of Tories. After his banhammering, he's dropped by our email box from time to time, to let us know he still cares, and that people like us are the reason Donald Trump was elected. He really has written us some first-class hate mail, including one of the greatest subject lines ever: "How’s your garbage piece of shit website no one cares about? :)" Complete with the smiley emoticon.

March Sure Has Been A Shit Month For Abortion Rights

Several states have passed anti-abortion laws this week, in preparation for a Supreme Court that will uphold them.

"Jacob" had an important new message for us several days ago, although this time the subject line, while every bit as florid, lacked the magnificence of his earlier classic: So glad baby murdering pervert scum get to watch abortion outlawed! We have to confess, we seem to have missed the reversal of Roe v. Wade, but apparently it's about to happen any minute now. "Jacob's" email arrived the day after Robyn's piece about the recent slew of state bills restricting abortion, which did mention the prospect of Roe being reversed if one of the current five SCOTUS votes for maintaining it is replaced by a Trump nominee, so we guess we've remained on his hate-read menu. Here are "Jacob's" thoughts on the matter:

Finally, the Satanists are going to lose a big one! And you guys should get even more hysterical, because once the still majority Christians in this country see how much the curse comes off our nation after we ban abortion, we’re going to start going after all of the sexual perversions that animate the pro-baby-murder cretins!

It’s not too late to repent and do something decent with your lives!

Seems to us "Jacob" might be counting his... oh, what's that expression about fetal chickens again? Still, we're a bit concerned about the fellow -- his previous messages have always been foul, but there was always at least a bit of playfulness in them, like when he called Yr Editrix “Rebecca Skankopf!” and Yrs truly “Dr. Cuck” (or "Dr. Fat," which frankly doesn't have nearly the same potential as a comic-book title). But this one seems a bit unhinged, even for him: America is under a curse because of abortions, sure -- that would explain the school shootings and/or hurricanes. But when abortion is again outlawed, will the lifting of that curse really be so obvious? No more hurricanes or mass shootings, or does that have to wait until gays are forced back into the closet, or stoned to death? Is "Jacob" saying we'll be returned to the pre-Roe paradise of 1972? If nothing else, gas for our 1973 Chevy, Vlad the Impala, will be 30 cents a gallon again, which would be nice.

The biggest surprise here is that, where we thought women had abortions because they choose to, the real reason is "sexual perversions." This was truly news to us. We suspect that deep down in his heart, "Jacob" just has some unresolved issues with a Coca-Cola machine:

Devin Nunes Has Leaking Fever, Only Cure Is More Cow

To offset the downright nastiness of "Jacob's" email, we're happy to share this email sent to Evan from someone who clearly appreciates our running gag about California dairy farmer and congressional lackwit Devin Nunes and what we suspect is an ongoing effort to romance his cows:

Subject: Cows have rights too

Our anonymous correspondent has a point. And "Jacob" should probably have a word with congressman Nunes.

So we guess the Parkland teens are the George Wallaces of AR-15s? That analogy really doesn't work.

Did the week's deletia include a Gunsplainer? You bet your sweet ARs it did! "Rob. S." did not care one whit for our story about the crusading 18-year-old son of a gun-range owner who's suing Dick's Sporting Goods in Michigan for age discrimination, since the chain raised the age for long gun sales to 21. The lad's attorney explained the kid was just like Rosa Parks, because after all, she could have chosen to sit in the back of the bus, just like this kid could have bought a gun elsewhere. Like maybe at the gun shop his dad co-owns. But was "Rob" here to point out that Rosa Parks could have simply taken a bus owned by her father? No; he was here to point out the simple fact that Dick's Sorting Hats wants to take away EVERYONE'S guns, and that Yr Wonkette is in on the plot because we were raised wrong:

wow, what cucks they are at Wonkette, but what else would you expect from a bunch of psudo-journalists whose parents never told them that they weren't the most special child ever.

I've got news for you, Americans right to bear arms will NEVER be eliminated, no matter how much hand-wringing or virtue-signaling you do. PLEASE come to my house and attempt to take my firearms, I think you'll find it to be a useless gesture, and there are MILLIONS of Americans who will do the same.

That's honestly one of our personal favorite gun-humper tropes: "Just try and take my guns away so I would be justified in shooting you dead." It's part of that whole thing where if everyone was armed at all times, we'd really be polite because every encounter with other people would have bloody death on the line. Also, any restriction on gun sales is automatically the beginning of a slippery slope into the horrifying embrace of a tryanical straw man. Those are the worst kind!

Also, that's some excellent parenting advice: Make sure your child know they're not particularly special, or they may end up a liberal elitist. Maybe "Rob" needs a hug. Clearly, he's seeking validation from the wrong kind of arms.

Some Wonker had to go and mention "assault rifles," which of course are not available to civilians, you dummies, because don't you know anything about anything at all?

Sorry, but 'assault rifles' are NOT sold in stores, because they are NOT LEGAL TO POSSESS without an NFA stamp and approval from the ATF. You are referencing Semi-automatic rifles, of which the AR-15 is a prime example of. It is the single most popular sporting rifle ever made, because it can be easily fit to different users, has light recoil, ammunition is inexpensive and readily available, and rarely malfunctions.

As far as states rights, no, Firearms laws are federal laws, which cannot be superseded by states laws. Otherwise, what would the point be of Federal Laws if the States could just pass contradictory laws?

For all the 'tolerance' preached about by Democrats, they are the LEAST tolerant of the INDIVIDUAL RIGHTS of persons. In fact, they are flatly INTOLERANT of anything that doesn't further their nonsensical political aims. Seems like that's par for the course when discussing a Political party that hasn't been this bent out of shape since Lincoln freed all of their slaves.

Supreme Court Won't Let Gun Humpers Have Any Fun At All :(

The Supreme Court still allows some restrictions on guns? What is this, Stalin's Germany in 1984?

So much to unpack there! Let's go in reverse order! 1) 1964 and the Republican Southern Strategy really did happen, so please shut up. 2) Guess this guy hasn't heard of the ACLU. Haha, we are joking -- the ACLU may pretend to be about individual rights, but it doesn't consider 2nd Amendment absolutism holy writ, so what a sham. 3) Actually, the Supremes have upheld state laws banning those assault rifles that don't exist -- in multiple cases! -- and that's after the 2008 Heller decision, which explicitly said the 2nd Amendment is not without limits. And 4), see #3, and also bullshit, the term "assault weapons" for semiauto rifles with military-looking accessories was pushed by the firearms industry in the '90s because it made for cool marketing to Rambo fantasists:

"Rob" had several other thoughts about how Democrats are still very sad about the Emancipation Proclamation today, because we are literally all still George Wallace and Strom Thurmond, and about how it's hypocritical to force some private businesses to sell penis wedding cakes but to allow other private businesses to deny "a legal-age American Citizen their Constitutional rights," but we were really impressed by this bit of Very Smart Logic:

Q: Why do Democrats dislike Guns?

A: Because they can be used to defend oneself from a tyrannical government.

Q: What is it that the Democrats hope to accomplish?

A: Establishing a Tyrannical Government.

He really does have a point there -- not about establishing a tyrannical government, but yeah, we'll freely admit to being just the slightest bit concerned about people who are anticipating the need to go to war against cops, federal agents, members of the military, and maybe their liberal neighbors in the name of protecting "liberty." That hasn't worked out especially well in practice, as any number of survivors of cops murdered by Sovereign Citizens can attest. Might want to check with the people of Oklahoma City about what a great idea it is for patriots to declare war on federal employees, too.

Oh, but those are very unfair examples, because those people were nuts, and folks like "Rob" are merely America-loving patriots preparing for the day they'll have to fight real tyranny, and they know their boomsticks -- and not mere laws, institutions, or the very fact of 240-plus years of civil governance -- are the only thing preventing tyranny from breaking out. See? Nothing to worry about! Have a nice day, and remember, if you see "Rob," you'd best be polite, or else.

Yr Wonkette is supported by reader donations. Please click here to send us money for abortions and guns. And if you're in the Pittsburgh area, get your butt to the Drinky Thing right now! -- there is not a moment to be lost!