Deleted Comments: I DONT USE CAP LOCKS, I HOLD THE SHIFT KEY BITCH. 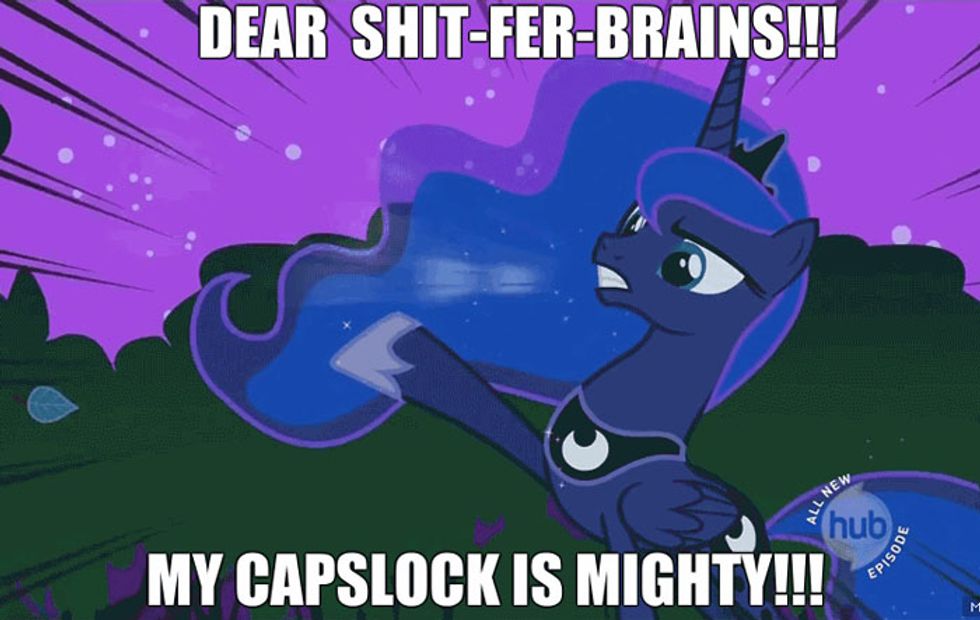 NO, I DON'T CARE THAT IT'S NOT CENTERED!

Time for our weekly dip into the Derp Locker to see what sorts of smartdroppings our dissatisfied customers have left for us. Spoiler warnings: There WILL be capslock ahead. Aye, and randomly used/ignored apostrophes, too. Read on at your own risk.

Trump Wants 'Dreamer' Government Shutdown? Nancy Pelosi's Got Something To Say. And Say And Say And

Our story about Nancy Pelosi's marathon House speech in support of the Dreamers brought a couple of the usual deplorables out to play, like "The Truth," who has an awfully original username. In response to someone saying Pelosi was a badass, "The Truth" had a witty riposte: "People fell asleep during her 8 your [sic] speech. I’d say dumbass." Isn't that S-M-R-T? Then our visitor offered this concise summary of how policy is developed in this country:

Liberal policies don’t work. Hence why every time they talk, it’s a distraction. With the Colts player getting killed by two timer deportee, that will not help the dreamer cause. Trump says, “Yeah shut it down if we’re not going to protect the borders.”

The real pity? That's simultaneously moronic and a completely accurate description of rightwing logic: Someone murdered an American, so let's punish a bunch of people who were brought here as children and who would not have been granted DACA status if they had any criminal record. That'll learn 'em!

"The Truth" also seems to be a little confused about how words work in general. For instance, in reply to a couple of Wonkers discussing the limited options available for Pelosi, as Minority Leader, the poor dope appears to have decided that was about racial minorities, not the minority party in the House:

Minority has to stay poor for Democrats to keep their argument going. Hence why they didn’t agree to the deal they said they wanted when Trump presented it to them. It’s just all talk. Never take action.

Ah, yes, the old Dem Plantation, keeping minority poor, especially through a policy that is only secondarily about economics. We would go on more about how giving Dreamers legal status makes good economic sense for them, their families, and for the US America and such as, but there's more distilled dumbth to get to. (Stupid Democrats, not taking that wonderful Trump deal that would help Dreamers at the cost of shutting out tens of millions of people from ever entering the US.)

The same story brought some interesting thoughts on immigration policy from "Janna W.," who knows an American when she sees one, and it is not YOU:

Like I really want to hear this old hag blab about how bad these illegals have it and how much her and the scumbag Liberal Commies refuse to work with our President. Last time I checked, our US Constitution talks about protecting Naturalized Citizens. What part of that does the the Liberal left not understand? Maybe there needs to be term limits on anyone who chooses to serve as part of our government. Maybe we need more than idiots like Pelosi, Schumer, and Reed. It’s obvious they all are wealthy and hate America, the Republic.

She has simply HAD IT with all these wealthy communists! Also, we get the impression that "Janna" thinks "naturalized citizen" means "someone who was born here." For one thing, there's that line about the Constitution, even if "Janna" is wrong about who it applies to. As Jana might know if she ever got information anywhere but Trump speeches, most constitutional protections apply to everyone in the US regardless of citizenship, which is why we can't just deport noncitizens without at least a pretense of due process. (Now we'll sit back and wait for a new Deleted Commenter to show up and say "NO THE CONSTITUTION DOES NOT LET FOREIGNS VOTE," and then get into a 50-comment argument about what "most" means).

The other reason we think "Janna" is a tad confused about "naturalized citizens" comes in her only other comment here, in reply to some snotty Wonker who pointed out that neither "liberal" nor "commie" needs to be capitalized:

I’m referring to what they really are. Political parties continue to exist in this country. Frankly I don’t care much for any of them, yet I refuse to vote for a moron like Pelosi. She and her croonies hate Americans. I’m a naturalized citizen. Are you?

Again, it's possible "Janna" could be a naturalized citizen, but if she were, why would she ask if another poster were, too? My guess is that she vaguely remembers hearing that Barack Obama wasn't a "natural born citizen" and got confused. Also, you should all know that "Deleted Comments: Nancy Pelosi And Her Croonies hate Americans" was my other potential headline for today's feature. "Croonies" sound like they'd be cute little singing critters, maybe.

Also too, would you kids stop accusing everyone who spouts rightwing nonsense of being Russian? It's lazy. Strange capitalization and missing apostrophes are hallmarks of good old patriotic American shitferbrainses. When they omit articles and get verbs all weird, then fine, begin to enjoying your castigation of moose and troll. As for "Janna," her abominable writing sounds like bad writing with all-American roots to me, based on all the bad writing by first-year college students I've seen. A glance at her comment history shows her griping three years ago about how Catholics aren't Biblical because they pray all wrong -- that's an American fundagelical obsession there).

We also had a very strange person calling himself "Bob Stone" show up in a thread from last May to mercilessly troll us stupid liberals, apparently because he googled "Devin Nunes" or something:

Get Devin Nunez picture on a coffee mug. He's an American hero......!

Here Are The Top Bullshits In Devin Nunes's Memo SO FAR

Apparently he looked at the date eventually, because then he showed up in a more timely thread on Nunez and his wet fart memo's takedown of the entire Deep state, where "Bob" got on with his serious taunting. See if you can guess what word he thought would be an insult!

Gosh, if you somehow weathered that onslaught of completely devastating trolling without being TRIGGERED to RUN AND CRY to your SAFE SPACE, you must be made of stern stuff indeed. He really got us good. His comment history is mildly amusing, including this observation from nine months ago at the Daily Caller, on a story about all the leaks from Trump's White House staff:

I'd be willing to bet Obama has the entire WH bugged.

Obviously, none of Trump's people would ever leak stuff. Has to be an elaborate -- and undetectable-- bugging scheme by the previous president. EXPOSED! DELETE.

If the Republicans who run our government don't have to spellcheck, we don't either.

Our pre-State of the Union post, which announced we'd be largely ignoring the Teleprompter Mess, brought a huge number of comments from one "Bob Barnes," who is a totally different Bob (or at least a totally different email and IP address) from "Bob Stone." We're inclined to think he's actually a different Bob, too, since he wrote more than "U triggered, WONKERS?" Almost nothing memorable from this Bob, except perhaps his very clever opening gambit, in which he proved that Bill Clinton was a serial rapist, because something something something he read in a rightwing dismissal of rape culture, which isn't real at all:

Does no one here believe bill is a rapist? Guy penetrated a 23 yo intern with a cigasr when he was the 49 yo POTUS. Isnt that rape? I mean, what with the MASSIVE power differential and all?

When someone pointed out that the relationship between Monica Lewinsky and Clinton was, however skeevy, consensual, Bob was READY:

Yup, one of those throw-shit-at-the-wall trolls who saw something at Return of Kings and thought it was brilliant. Poor dipshit couldn't even be arsed to get the standard MRA line about consensual sex in the right order (or he's a genius performance artist, reversing it like that).

Did we mention "Bob" insisted he doesn't like Trump at all, he thinks Trump is evil, but Bill and Hillary are MORE evil. No doubt he used to be a liberal Democrat (and maybe a Navy SEAL) until he saw Democrats saying such terrible things about Trump.

Because "Bob" had never heard the Howard Stern interview where Trump said he liked to walk into pageant dressing rooms and ogle naked contestants, it never happened, and Trump definitely never barged in on any teen pageant contestants either. When people linked to the interview and to stories about the teen girls who said Trump had come into their dressing rooms, "Bob" proclaimed victory, because in the Stern interview, Trump only bragged about violating adult women's privacy, not teenagers', so YOU ARE THE ACTUAL LIAR FOR SAYING HE ADMITTED TO WALKING IN ON TEENS AND YOU MADE IT ALL UP. As we all agree, walking in on adult nekkid ladies is just fine, because he owned them we guess.

"Bob" also got surprisingly vehement in yelling at a Wonker (HAW HAW) who suggested he he'd been "hiding under a rock," because god, what sort of moron would ever use that phrase? It's just so lame. The escalation is...peculiar:

Plus seven or eight more iterations on that theme. Wow, that guy really hates rocks!

lol, look at those libs speak in sports euphemisms since they have no facts.

When he typed "to" instead of "too" and someone pointed out the misspelling, he insisted his spelling was just fine:

And it's true, he really did follow a question with a question mark in the sentence where he misspelled "too."

Inevitably, someone called attention to his ranting capslock, and that made "Bob" angry. We wouldn't like "Bob" when he's angry. Or at any other time.

We'll confess, that last one made us laugh. But we wouldn't want to encourage him. One laugh out of 50+ troll comments is not a good ratio.

Yr Wonkette is supported by reader donations. Please click here to send us money. From under your "rock" you MORAN!!!