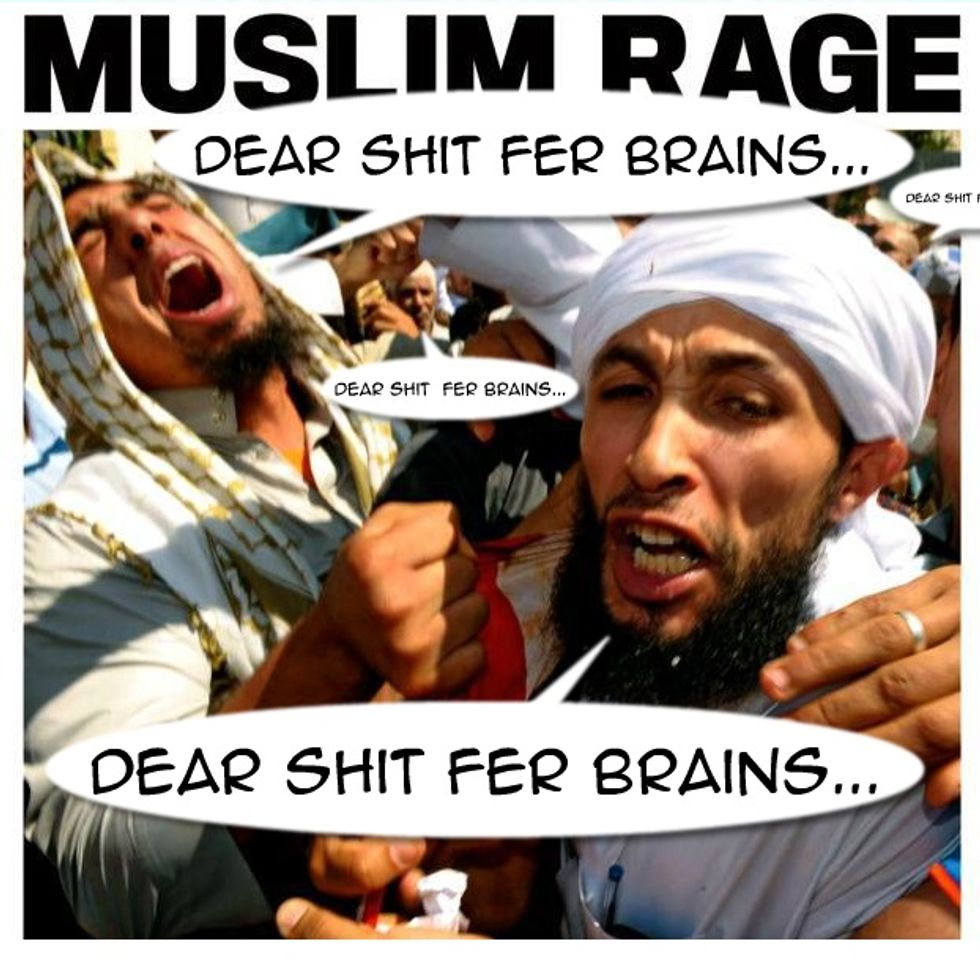 So here's one heck of a surprise: Most of our deleted comments this week are about the Paris terrorist attacks, and the subsequent mass pants-soiling by Republican governors, Republican presidential candidates, and the truly rank Republican rank & file over the prospect that ISIS operatives might choose to sneak into America as a refugee. Never mind that only a really dumb terrorist would try lying their way through an 18 to 24-month screening process instead of choosing the more expedient method of flying in on a tourist visa, which requires far less scrutiny.

Let's start with Brave Patriotic Patriot "Solution1776," who was completely dumbfounded that we could even think of criticizing Republican governors who only wanted to keep their citizens safe:

WTF.....are you kidding me. The author of this article wants muslim refugees. I am sorry, it is NOT OUR FUCKING JOB to take in radical muslims. I bet he would be singing a different tune if those 'refugees' were moving next door to him. Fucking hypocrite.

[contextly_sidebar id="fGMgk9U9V653qEwI7WVlBi6P8yP3goJM"]After gently tapping him with the Banhammer of Loving Correction (© and ™ John Scalzi), we left that comment up, and as we replied at the time, we had to admit that he inspired us:

As it happens, I live in Boise Idaho, about a block away from an office that serves refugees. My son has volunteered in a program that teaches English to refugees. Thanks to your asshole comment, you've done some good, maybe: On my next day off, I'm swinging by the refugee agency to see what volunteer opportunities they have.

Sadly, we'll confess we actually spent our next day off doing laundry, but we have another day off coming up right soon, so we promise to drop by the refugee center. In clean clothes, even. Solution1776 had moar thoughts on the Refugee Threat:

We learn so much from our deleted commenters! For instance, China went communist after Mao brought in a lot of Muslim refugees, and that caring about our neighbors only means the ones who are exactly like us, and that idiot from Nazareth who thought our neighbor is any fellow human in trouble was a sick liberal piece of shit traitor who wanted to sell out Judea to the filthy Samaritans.

Another reader, "Ge off" (who either has trouble with his spacebar or found "get off" too risqué for Disqus) objected that we were LYING about this national festival of paranoia and xenophobia, which is merely a big word liberals made up:

Why is common sense so hated by progressives? Texas never said they were afraid and their stance does nothing to help ISIS. The only real fact is that many ISIS members are Sunni and Syrians.

The real question is, why you think being nice to ISIS will pacify them?

[contextly_sidebar id="Ms6xVA2yqOKyYdXSfT634eisi8PfBEZJ"]You mean to say that Greg Abbott didn't actually say "I am banning Syrian immigrants (which I actually lack the power to do) because I know it will sell well to my constituents, who have been freaking out about Muslims for years now"? Wonkette regrets the error. We could point out that we're calling for our benighted nation to be nice to the victims of ISIS, but "Ge off" would only look at us with that blank confused head-tilt that's adorable on a pug, but less so on a person.

"Chuck Cap" was far more succinct in his criticism:

Holy shit fuck! Did I land on a refugee-hugging bunch of queers site.

Guess maybe you did, sunshine.

"CLAUDIA LAJOIE," a brave lady who is not afraid of anything and who likes her caps locked, like her brain, upbraided us for our unfair suggestion that people were reacting out of fear. She then proceeded to explain that if we had any sense, we'd be very afraid:

HOW dare you imply the states refusing Syrian immigrants are cowards? Who raised you, aren't you Americans!!!!? Go ahead put as many of these killers YOU can in your home! Do you really believe when ISIS itself trys to destroy your home that these immigrants living in your home will be on your side?

In case you've forgotten the illustration what ran with the piece, here are some of those killers who must never cross our threshold:

[contextly_sidebar id="LpQoLY7C14z4S8wDRpp9plazZXoS21aU"]We received about seven bejillion similar comments, and intend to return to them in a later post, but for now, we'll close with a non-deleted commenter, one "pumpkinspiceheroincat," who will get away this time with a Very Stern Warning. In reply to Our Editrix's post about the Topeka city councilman who was arrested because he only abused his 16 kids a little tiny bit, pumpkinspiceheroincat wrote,

You guise have never heard of the Quiverfull movement and the trend of rehoming foreign born adopteds (The Child Exchange)? That's so cute.

We'll go with Yr Editrix's reply, from the Sekrit ChatCave:

Rebecca: this commenter should be banned just for being a noob.

Rebecca: US LIBEL. You should give him a warning in deleted comments. FOR BEIN RONG.

What Yr Editrix is getting at here is that if you've read Wonket for any length of time, you'd know we've been mocking the quiverfulls since pretty much forever. And, yes, we may have mentioned "rehoming" once or twice or nearly twenty times in the last year alone. If you're new here, pumpkinspiceheroincat, we even have a "search" button and everything! (it's in the upper-right corner of your Wonket page, with the little magnifying-glass icon), so you could look to see if we've covered something.

Yeesh, do we have to teach you ignorant muckerfuckers EVERYTHING about goddamn netiquette?