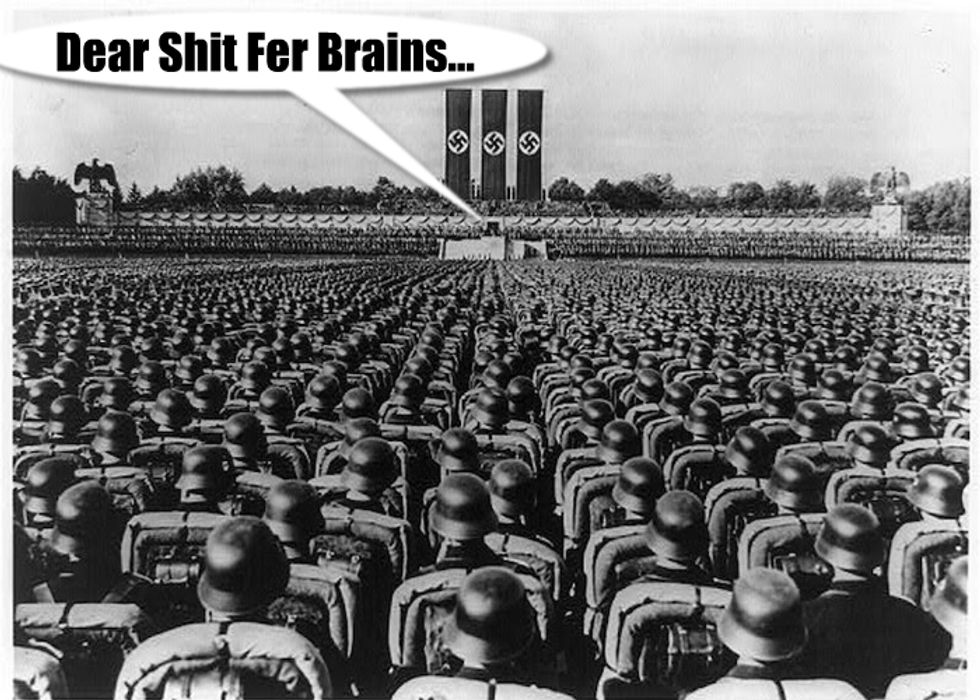 Does it violate Godwin's Law when you're talking about actual neo-Nazis?

It is a truth universally acknowledged, that a moron in possession of a single idea, need only repeat it over and over for others to see it's true. Or at least that's the principle our deleted commenters seem to operate on, as we learned from "True Blue DIO," one of the visitors to our story on Sarah Palin retweeting a not-veiled neo-Nazi reference. "True Blue DIO" had a really important question for us all, because he was here to wake us out of our sheeplish stupor:

uh...whats wrong with being a National Socialist again?

Sarah Palin Literally Just Went Full Nazi. This Is Not A Drill.

After a few Wonkers took the time to point out that you really can say quite a few things about the ideology of national socialism, our visitor encouraged us to learn more about it, because as everyone who's ever come to Jesus after reading a Chick Tract knows, all that's needed to change your life is exposure to the right ideas. Or the far-right ideas, like those found at the 4chan board /pol/ (for "politically incorrect"), the home of all those nice young folks who dream of a white homeland, masturbate to anime, and yell at their mothers to make them another sammich:

Yes, so powerful is the truth of their memes that all you need to do is visit, and you will surely see the power of white supremacy and memes. He really was a boring little troll, but the dumbfuck confidence of that invitation is really something to behold. Or maybe that's the joke. They just work on so many levels, they do. "True Blue DIO" didn't say much else worth noting -- this is a guy whose wit runs to stuff like this:

Can't you just see how going to read a lot MORE stuff like that would open your eyes to the truth? Have to say, though, he did manage to make a stupid Nazi argument we hadn't seen before: Trans people (at least white ones) are race traitors because they aren't fulfilling their biological destiny and producing white babies, thus "putting their race at risk," which is the real reason he finds trans people "degenerate." See how much more sophisticated that is than just admitting he's freaked out by nonbinary gender categories?

That Sarah Palin thing really brought out some winners, like "Coach Don," who explained to us that we're just nuts, talking about some kind of supposed neo-Nazi code stuff:

I consider myself well read, but this whole 14 words and 88 is some real tin foil hat stuff.

Someone is going off the deep end here and it isn't Palin.

Obviously, if you've never heard of a thing, then it's not real, and some crazy site like the ADL is making up crazy conspiracy theories, too. Crom knows neo-Nazis themselves don't fetishize their "14 words" and "88" number magic.

Crazy liberals! Where would they ever get such nutty notions? Then again, perhaps we're just not "Coach Don's" cup of Fanta; his only other comment at Wonkette was a simple "Not sure how I found my way to this website, but it's a real loser." We'll miss him, too.

We also heard, entirely too much, from "ID Required," who commented on the Sarah Palin story and several others before the banhammer fell, and who changes his username as often as a blogger changes his shirt -- at least a couple times a week. Since visiting us as "ID Required," he's also been "No Blank Checks" and "Uncle Moneybags Sam." His email address is "deconstructingamerica"@[redacted]. We think he's trying to make some kind of point there, although it's hard to tell from the stuff he actually writes, like this funny, funny joke about the Trumps at the G-20:

They were going to take Melania to the new climate control center but the antifa blocked her in. Opps,

Silly Europeans, with your unscientific belief in "climate control" and your violent leftists, hahaha! As for the actual article about Sarah Palin, "ID Required" wasn't impressed:

Republicans Are Fucking Up That Obamacare Repeal BAD: A Wonksplainer

The party that wants to drown government in a bathtub is bad at governing? Whodathunkit!

Guess he told us! not very articulately, but he definitely told us. He also had thoughts on Republican healthcare "reform," although it's possible none of this was intended as a factual statement:

Remember the good old days, before health insurance? Considering that employer-based insurance developed in response to wage and price controls during WW II, we bet "ID Required" doesn't either, but maybe he also thinks people should pay for their chemotherapy by bartering chickens. Then again, why would you even need healthcare, since hospitals only make people sick?

"ID Required" had a lot more to say, but it was pretty repetitive stuff about how Hillary Clinton ran the most corrupt foundation in history and also only had a popular vote majority because of illegal aliens voting, so we won't bother with it.

Do the law of gravity next, Rick Perry!

Our story about Rick Perry's creative spin on how the law of supply and demand works -- "you put the supply out there and the demand will follow" -- wasn't much appreciated by "MattS156," who made a whole new Disqus account to tell us so:

Wow, a PhD who writes like a snarky teenager. CNN could use this moron.

To which we can only reply, as did the great Roman rhetorician Seneca the Elder, "Neener, neener, neener."

That thread also brought a brief return from Turgid Love Muscle Guy, this time under the name "TakeOutTheLiberalTrash." We don't usually mention TLM Guy here, because why reward attention-seeking behavior? But he has a couple of new hobby horses, so for tracking purposes, we figure we should probably document them. Here's one zinger:

If a male Muslim terrorist blows himself up in a woman's bathroom while eating a vegan snack, who do liberals side with?

Deleted Comments: How Did Vegan Baby Butthole Get Trump Elected?

Workshop notes: You've just thrown together a bunch of stuff that conservatives freak out about, but there's only one person in your joke, making the "who do liberals side with" bit nonsensical (we certainly wouldn't side with the vegan snack, because we're MONSTERS). You need to have your scary trans strawperson blow up a Prius showroom, maybe.

The other new thing we noticed was that TLM Guy has found the real cause of all our nation's immigration woes: the Immigration and Nationality Act of 1965, which is why we don't have nice white immigrants any more:

He must have read an article. Also, when someone berated him for cheating on Wonkette by copy-pasting his tirades at The Atlantic, he explained his modus operandi, since we probably could never have figured out ourselves:

troll any site that uses Disqus. There's plenty to go around for everyone.

Good to know. We have to admit to a certain awe at TLM Guy, who may be one of the most prolific (if repetitive) non-bot commenters on the interwebs -- he has hundreds of Disqus accounts to post the same tired stuff from, and as far as we can tell, does it without automation, manually copy-pasting his self-created rants every single time. You sort of wonder what he thinks he's accomplishing, and how long he spends each day at this. Turgid Love Muscle Guy, drop us an email -- we're sure you have a spare account -- at doktorzoom at-sign wonkette dot com, so we can arrange an interview.

Conservatives Know Who To Blame For Trump's G20 Hotel Fiasco: THANKS, OBAMA!

And finally, in the comments thread attached to our story on how Barack Obama ruined Donald Trump's hotel reservations for the G20 (but seldom about the story), we heard from "Whodis Penny," who has many thoughts on many things. A sampling:

Did you see what he did in that last post, there? Haw Haw. Gotta like a guy who urges people to uncritically accept whatever they find on Google about voter fraud -- all of it, we guess?-- but won't look at a link from NPR, because that's biased.

Also, he had thoughts on Barack Obama, but they are not racist thoughts, because Barack Obama is the REAL racist:

That's some pretty compelling thinking on the Iran nuclear agreement -- hey, maybe we could have gotten a nuclear deal with Iran that didn't involve releasing the aassets frozen since the Shah's overthrow! Trump coulda made them accept that! (If he paid them enough...) Unfortunately, after proving with such impeccable facts and logic that he had very well-founded reasons to disagree with Barack Obama, poor "Whodis Penny" let this slip:

elect a nigger and expect a ghetto, that's how this word play works right???

So, yeah, he seems nice. But at least he called us snowflakes and assumed the words "President Donald Trump" would throw us into a tizzy of despair, because magic words really do have great power, so on the whole, we'd have to say he won. In fact, we need to go find a safe space now. Maybe a nice place that serves bagels and has wifi.

Yr Wonkette is supported by reader contributions. Please click the "Donate" linky so we can go to the doctor and get sick. Google it.