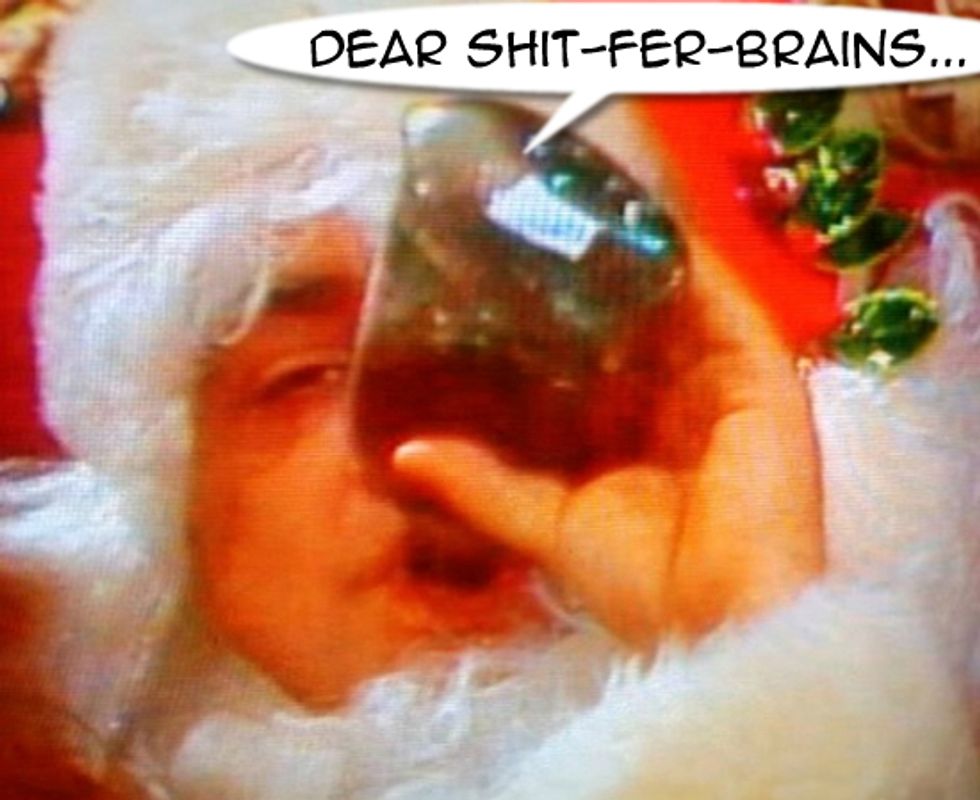 You all get Santa's Trap Door, that's what ya get!

It's Sacred Baby Festival Eve, and that means the Derp Elves have been working extra hard to bring you this week's Deleted Comments a day early, so Rudolph can go wake up the sheeple with his red nose, and tiny tots with their eyes all aglow can send their ALL-CAPS WISH LISTS to Santa.

Let's start off with some electoral goodwill from one "Joel Shelton," who dropped by our Friday post about Loretta Lynch's decision not to prevent James Comey from sending that "Oh yeah, more emails" letter that probably cost Hillary Clinton the election. "Joel" offered this important message about how we all need to calm down and get over ourselves:

To all this BS I say again. Donald Trump won and Hillary Clinton lost. End of story. Now get over it and move on. Nothing is going to change. For God's sake let it go.

Lynch could have stopped Comey from throwing the election. But she didn't.

Well, by golly, a bunch of Wonkers insisted on not just letting it go, so "Joel Shelton" brought out the big guns: He triggered us with the words that terrify liberals more than any others: "Merry Christmas," which as everyone knows sends us into fits of terror like a Knight Who Says "Ni" hearing the word "it":

Frankly, we are considerably more offended that he misspelled "yadda yadda yadda" -- and on Festivus, no less! Some people have no decency. "Joel" also explained it's no biggie if Donald Trump eliminates Medicare, because even though he says he's 70, Joel worked hard and saved enough money that he won't need no government insurance, ever, unlike all the wastrel losers who voted for Clinton:

let me assure you that I have more than enough money to take care of myself, family and grandchildren for a long time. See I worked for over fifty years and saved a large portion of my earnings and now have it invested to where I never have to worry. Hard work and saving pays off. Good luck and hopefully you will be in the same position in the future. And one other thing, hope you and your family have a very "Merry Christmas."

Golly, he sure did get to us with all that Merry Christmasing! Also, he wishes we'd all just stop making a big deal out of a little election, since he never freaked out when Obama was elected president:

Look, please calm down. When Obama was elected all I did was say whatever and went on about my business. I didn't get worked up about it because I knew that there was nothing that I could do. And also remember this, the sun will come up in the east and go down in the west. It has been doing it for millions and millions of years and will continue to do it. Now, if the sun comes up in the west in the morning, I can and will ensure you that it is going to be a bad day and you have the right then to get excited and worked up. So please calm down.

Funny, though, a quick scan of "Joel's" Disqus history -- which only goes back a month -- finds him saying rather unkind things about Barack Obama, the liberal media, and those terrible lying nasty Democrats, and of course, explaining that the Russian hacks of Democratic computers are all a myth -- maybe even a conspiracy! He even seems a little worked up at moments.

And a joyful Saturnalia to you, too, "Joel!" May 2017 find you free of PSYOPS agents.

Someone with the cryptic username "ll" -- it may not show, but that's two lowercase L's, not the number eleven -- reacted to the same piece with confidence that a Trump presidency will make him rich beyond his wildest dreams, based on the stock market's performance in the month since the election:

Since the republicans voted and won the election, my 401k and stock have increased incredibly, where as they had not done well at all for the last 4 years. My friends have been paying $2500 month for family health care, and hopefully that will decrease when Obamacare is repealed.

We aren't certain "ll" really understands financial stuff too good if they're making longterm predictions on a month's worth of data. "ll" may even be fibbing a bit about the market; here's the Dow Jones average over the past five years:

And golly, once Obamacare's repealed, health insurance will never go up in cost again, just like it never did before the ACA was enacted. Remember how no one ever complained about medical costs before then?

That post really attracted some nifty trolls, like "locutus_of_klingons," a name which makes no sense at all, who left only a single pathetic comment for us:

Yes, with a period after all the exclamation points, because don't you libtartds even know you always end a sentence with a period?. The real fun with this guy is scrolling through his comment history, in which we find he subscribes to just about every possible conspiracy theory out there: He's an anti-vaxxer, a 9-11 and Sandy Hook truther, thinks chemtrails are a serious threat, and insists Michelle Obama is a dude. In his world, HIV is completely fake, and Zika is nothing more than "Bill gates' new vaccine toy aiming at killing the unborn." Hell, he even embarrassed himself on a recent Breitbart article celebrating Trump's decision to make NASA stop wasting money on studying "global warming" (locutus approves) and instead to focus on space exploration (locutus sees right through THAT hoax):

NASA = hollywood. they never been anywhere. who knows where all the money is going. probably to hollywood CGI artists producing some fake garbage

Frankly, we feel insulted he only left that one banal comment for us and wrote his best crazy elsewhere.

Hopefully somebody will sue Jones very soon, the miserable psychopath.

Our story on the sad awful woman who was inspired by Alex Jones to send death threats to the father of one of the kids killed at Sandy Hook (since of course it was all a hoax) also attracted a constellation of (we'll assume) Alex Jones fans, or at least people who seem to have a non-monogamous relationship with reality. "Danny J Rattimer" used the one and only comment on his Disqus account to let us know he thinks Alex Jones is absolutely right to encourage people to find out the real truth: A mass shooting of 20 children and six teachers is obviously a hoax, because no way that could be anything but a government plot to take guns away, but Hillary Clinton running a child sex slave ring out of the (nonexistent) basement of a DC pizzeria makes a heck of a lot of sense, and is the kind of thing a patriotic American with a gun ought to go check out:

i looked at this comet pizza and it looks creepy,the instgrams are creepy,its for sure brought on them selfs,the pictures the instgram posting not kool!

"Danny's" comment won an enthusiastic "TRUE!" from one "Kristy Fernandez," who found it the only credible thing on Wonkette, and who wishes we would stop covering up for -- or possibly actually participating in -- Hillary's pedophile kidnapping ring (from which no victims have emerged, and which hasn't triggered a single missing persons case or police investigation, because everybody's part of the conspiracy):

Fuck Google for bringing me to this creepy badly written REAL FAKE NEWS site. Elder abuse is on the rise along with the number of missing and exploited children....can't wait for Sandusky and all pedophiles like him to receive their death penalties for their deception her on our beautiful earth. Thank you LORD for our President Elect Donald Trump....and his people he put into their positions............I wish you guys had better jobs than trafficking children.............

Yes, kids, "Fake News" is well on its way to becoming the most misused wingnut phrase since "low-information voters." "Kristy's" comment history is more than a little obsessive about the whole topic, and frankly, she seems unbalanced, so we won't say anything more about her, except to sincerely hope she gets the help she needs. And that she stays away from gun shows.

So let's close with a less depressing pair of comments from "Joe," who was pretty upset that we would say unkind things about that poor deluded woman who only sent a few deranged death threats to a grieving father, because couldn't we see she has to use a walker to get around? What kinds of monsters are we, picking on disabled people like that? Besides, Alex Jones makes a lot more money than we do, so that must mean he's right, right?

Your are targeting a disabled lady and as for Alex Jones he has more reader's then any bs rag you will ever write for. It took me five minutes to debunk your Alex Jones gay frog slander. Maybe you should listen to what he is saying and then you might wake up.

We dunno, this sure as hell sounds like Jones is awful worried about gay frogs, even with the silly edits:

But what really kicks "Joe" up into the Dear ShitFerBrains Hall of Fame (or would, if such a thing existed) is a simple typo/autocorrect error that takes a merely unhinged rant and turns it beautifully surreal:

You are very brainwashed. This is sad to hear so much ignorance being spouted out by all of you fake liberals. Librarians are for less government more freedom. The people who should be locked up are the leftist who made death threats to Trump and electro's and Trump supporters not talk radio host or mentally ill disabled woman. We are all Americans, it's time to make our world safe and prosperous again. Wake up!!!!

While we're perfectly willing to believe librarians are among our greatest forces for good, we'd note they tend to work in government-funded (at least for now) institutions. We have a hard time envisioning them spending much time poring over Ayn Rand or gluing handmade Ron Paul posters onto light poles. Also, whoever's sending death threats to the Electros had better cut it out, or the Electros will come for them.

Also, "Merry Christmas." OR ELSE.