Deleted Comments: Nazis And Furries And My Little Pony Because Man, People Suck 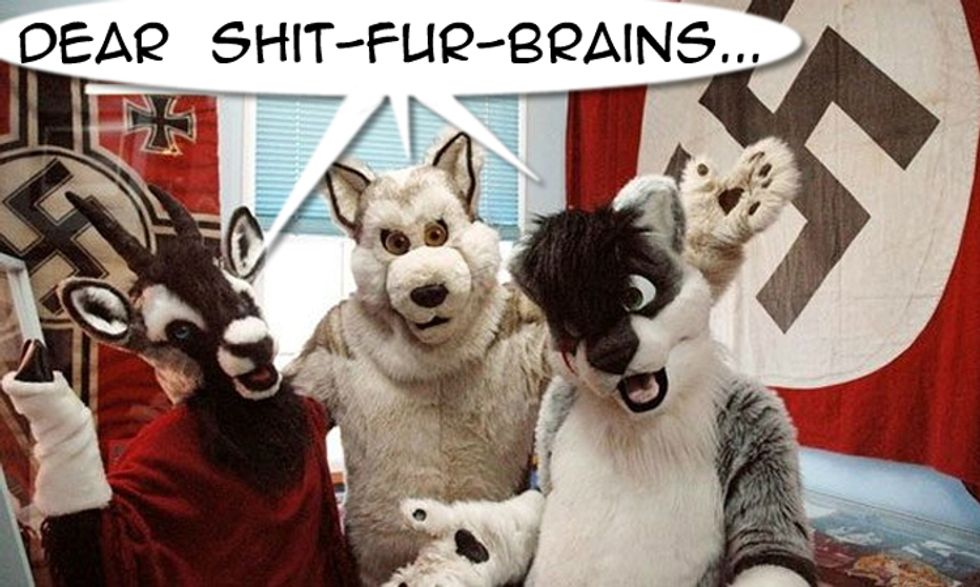 Yet another weird week, with the usual collection of oddness and derp, so let's put on our $3000 anthropomorphic animal costumes and jump right in. What's that? You don't have one? Weirdo. The point is, we heard from a few folks who were not terribly happy with our story about the cancellation of Denver's big Furball, the Rocky Mountain Fur Con (RMFC), thanks to a whole bunch of drama and weirdness that involved Nazi furries, alleged threats of violence that led to high security fees at the hotel, and, oh, yes, an organizer who turned out to be a (probably) sovereign citizen who hadn't paid taxes for a long while. Also, (definitely) a convicted sex offender. We thought we'd done a pretty fair job of offering our sympathies to the furry fandom for having been infested by neo-Nazi furries, but apparently we were all unfair and stuff, as "Aaron R," who created a single-comment Disqus account just to tell us off, informed us. Apparently, we were even more unfair and terrible than one of the sources we used:

Wow, just when I thought the Dog Patch Press article would stand forever as the worst-written account of this situation, you guys dropped that bar to the floor and waltzed right under it. Bravo!

We certainly appreciate the compliment! We also heard from "Braheem Hazeem III," who explained the convention's problems had nothing to do with neo-Nazis in fursuits, but were all caused by a Twitter comment from someone who wasn't planning to go to the convention, who had said Nazis should be punched, and who was then told it'll be funny when someone shoots her. Also, there are apparently no actual neo-Nazis in fursuits, because those nasty Social Justice Warriors just lie about everything:

Actually it was cancelled cause some ignorant sjw made physical threats of violence. Cause real nazi accept gays into their groups right? Also don't they actually practice white supremicy? Something that there is no actual evidence of. I dare any of you that are spreading this crap to find ANY evidence of this nazi behavior, and no, armbands with paws on it doesn't make you a nazi.

BH III went on to explain further why all this judginess about Nazi furries is so irritating:

I read through the drama, it started with threats that lead to costing the hotel around 22k for security, which is why it was cancelled. But what really pisses me off is It is an insult to those who have died and suffered under the conditions of actual fascism. Not this, "my feelings are hurt" crap.

Hmm. Where to start? We suppose we can tackle the last point first: True, the current wave of "alt-right" fans of white nationalism and Trump haven't actually annexed the Sudetenland or built any concentration camps. They're just really big fans of those who did, and delight in the lulz they get from trolling Jewish reporters on Twitter with anti-Semitic cartoons, and they're only talking about restoring America's racial purity, not actually doing any ethnic cleansing (yet). So that's a very useful distinction.

As to HB III's claim that wearing an armband resembling a Nazi armband doesn't make someone a Nazi, we can agree to an extent -- if you're an actor in a WW II movie, for instance. Or even maybe if you're a historical re-enactment hobbyist, although there the line gets fuzzier, or blurrier, or furrier. Most of the people we've known who just loved collecting Nazi regalia tended to think the Nazis were pretty cool guys, although of course we're sure there are folks out there who have a purely historical interest in the stuff -- thanks to my own hobby of debunking Holocaust deniers, I've acquired a few books about the era with swastikas on the spine.

But the notion that "Nazi furries" is just a slander made up by mean liberal media simply doesn't hold up: If we're being dared, we'll cite this fine piece from New Statesman, which was actually published before all the RMFC drama. It's a pretty thorough look at the various strands of far-right politics at work in the "#AltFurry" crowd, and observes, fairly enough,

beneath their costumes, furries are humans – and thus have as diverse a range of opinions as any other subsection of society. Some Nazi furries, therefore, are white-supremacists, and others are simply into kinky costumes. Others [...] might hide in plain sight by wearing costumes but then deny holding Nazi beliefs. The whole thing, then, is incredibly complex.

But yeah, while not everyone who likes a bit of Nazi imagery is a white supremacist, there are indeed white supremacist furries who can't wait to purge the earth of cultural degenerates, although some factions may be more friendly to gays than the historical Nazis were. There's plenty of evidence of white nationalism among some furries, folks who happily advocate ethnic cleansing and sending dangerous leftists off to Mar-A-Gulago, which is why decent normal furries are making noise about it. Also, for a more detailed look at the furfoofaraw over the cancellation of RMNC, there's also this detailed article, with interviews of most of the main people involved, at the Daily Beast, which only sounds like it's a furry blog.

We also heard, on Twitter, from someone called "#BroniesForTrump," who wanted to defend one of the "AltFurry" groups mentioned in the piece, the "Furry Raiders," which originated the paw-mark armband that resembles the Nazi version:

That's just, like, your opinion, man. As the Daily Beast piece explains, the Furry Raiders group created a lot of ill will at the 2016 RMNC when they maneuvered to reserve most of the rooms at the convention hotel, which is part of why they get mentioned in stories about this year's cancellation -- they pissed off a lot of people with that. And then there's the group's founder, "Foxler Nightfire," the progenitor of those armbands. Foxler claims he just liked the look and knows little about WW II or politics (he insists the name isn't a combination of Fox and Hitler, but instead Fox and Miller, his last name). Can't imagine why anyone would think Foxler's toying with Nazi symbolism, nope, not at all:

Much, much more on Foxler and the Furry Raiders in the Daily Beast and New Statesman pieces; we'll note the Furry Raiders website has lots of messaging about equality and love and diversity, which could be backpedaling from their controversial reputation, but also, for some "AltFurry" folks, is about full equality for terrible ideas, like this weirdass image promoting the total nonjudgmental diversity of the furry community:

Awww, Hitler and Stalin fans, together again at last. That's the kind of open-mindedness that can lead to your brain falling out. So sure, it's "tolerance" -- for the intolerable.

In any case, we had to ask "BroniesForTrump" what on earth a Trump fan would find appealing about My Little Pony: Friendship is Magic, a cartoon show where the protagonists are literal social justice warriors who are all feminist and stuff; his reply told us plenty:

So he really likes how the show looks, and he likes the work of Lauren Faust, the show's creator. Bit of a problem with that: Faust is herself a nasty social justice warrior whose current Twitter profile has a picture of Princess Leia and the phrase "We are the resistance," and she doesn't like Donald Trump one bit. She also wrote an essay for the Ms. Magazine blog in 2010 explaining her feminist intentions for the My Little Pony reboot, in reply to a post from someone who just didn't get it. Among her goals:

There are lots of different ways to be a girl. You can be sweet and shy, or bold and physical. You can be silly and friendly, or reserved and studious. You can be strong and hard working, or artistic and beautiful. This show is wonderfully free of “token girl” syndrome, so there is no pressure to shove all the ideals of what we want our daughters to be into one package. There is a diversity of personalities, ambitions, talents, strengths and even flaws in our characters–it’s not an army of cookie-cutter nice-girls or cookie-cutter beauty queens like you see in most shows for girls. [...]

You can be friends with people who are vastly different from you. And even though all friendships have their share of disagreements and moments when you don’t get along, that does not mean that your friendship has to end.

We'll speculate she didn't exactly mean that spirit of tolerance should extend to people with truly abhorrent views, like white nationalism.

The link that BroniesForTrump included really led down a rabbit hole: It's to a bizarre little post from a guy who takes neo-Nazi phrases and reframes them with pastel cartoon ponies:

"Because the beauty of the Wise Pony Alicorn princesses must not perish from equestria."

That's an adaptation of the white nationalist "14 words" slogan, "We must secure the existence of our people and a future for white children." Cute, huh?

So it turns out that "AltBrony" is a thing, and it's a small bunch of loons (or trolls?) who insist that, never mind what the show's creators may have said, MLP is really about white purity and European cultural superiority. The guy who wrote it, "FarRightDiscord," just loves combining Nazi rhetoric and imagery with the feminist children's show. Some examples:

You get the idea. According to this guy, if you read it the right way, My Little Pony is secretly full of pro-Nazi messaging, a "redpilling show with ethnocentrist solar Reich of 1000 years[.]" This should supposedly be a hilarious joke on the foolish voice actors like Tara Strong (Twilight Sparkle), who's Jewish, and John de Lancie (Discord), not to mention Lauren Faust, all of whom regularly post anti-Trump messages to Twitter. What fools! They're really priming children to embrace Nazism!

The death of the author indeed!

Once again, we're left with the question of why rightwingers are so very bad at pop culture. It's difficult to gauge how much of this "AltFurry" and "AltBrony" crap is serious, and how much is just trolling, or whether there's even a meaningful difference. As Uncle Kurt Vonnegut reminded us in Mother Night, his own novel about a guy masquerading as a Nazi, "We are what we pretend to be, so we must be careful about what we pretend to be."

Yr Wonkette is supported by reader donations. Hit the "Donate" clicky below to send us your American Dollars or Equestrian bits (no Reichsmarks, thanks), and we promise not to blow your donation on a Rainbow Dash plushie.