Deleted Comments Of The Week: 'Get Off Your Rump And Vote For Trump!' 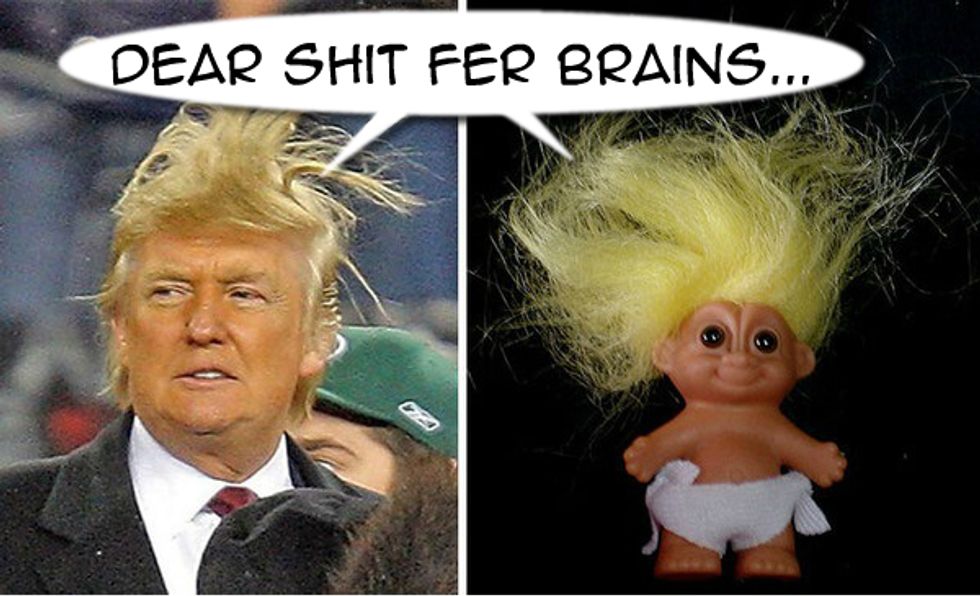 One's a rubber-faced novelty item that became a fad for no good reason. The other's a doll.

Lucky us! We've been visited by TrumpThumpers a few times in the last week, and they'd like to set us straight on a thing or three. We learned that Trump fans are a diverse bunch, ranging from people who are obsessed with immigration to people who write 2/3 of their messages IN ALL CAPS. For an example of the former, our story about the excellent Rolling Stone profile of Trump (which you should read if you haven't yet) brought in five responses from "Samuel," almost all of which mentioned the same dubious statistic:

1600 Illegals or more come here every day. They just walk across our southern border. I find that unacceptable which is why I will vote for Trump irrespective of his position on other issues.

We didn't bother looking for where that particular assertion comes from, because if he says it five times, it's obviously true (or not -- his figure works out to 584,000 a year, but in May, former Reagan/Bush aide Linda Chavez cited a number of 400,000 for last year, and noted that the numbers have dropped by about 28% for the current fiscal year). As for the bit about them "just walking across," that too seems a bit unlikely, given that the number of Border Patrol agents has doubled over the last decade, to about 18,000. Also, too, the annual figure includes a significant percentage of people who arrive by plane and overstay their visas, not that Donald believes that.

But obviously, even one illegal immigrant is one too many, and it'll be easy to clear all 11 million of them out, says Samuel:

What he says is not impossible at all. All illegals out of this country in two years. A wall to put a stop to the 1600 plus illegals crossing our border every day. Passage and enforcemnt of mandatory e-verify. If the unarmed invaders can't get jobs, and can't get welfare; the vast majority will leave of their own accord. None of us who support Trump are racist, nativist, anti-immigrant, anti-black or anti-women; but we must endure these daily canards that are hurled in our direction because we believe in the rule of law and are therefore opposed to ILLEGAL immigration.

See? Easy-peasy! No need to impose a police state to root out the Invaders, and also the underground economy will just magically vanish if we simply require e-verify for all conceivable employment, and surely no one could object to the resulting expansion of Big Government. Now stop hurling French ducks and unconventional aircraft parts at Trumpers, will you?

Samuel even got the idea that somehow illegal immigration was the source of the national debt and the budget deficit, which are apparently disconnected from taxes and spending. In reply to a comment about how Reagan had exploded the deficit by cutting taxes and increasing military spending, Samuel explained:

You mention the deficit and have the audacity to criticize Reagan after what Obama has done? I respect your right to vote for that shameless, amoral, prevaricating Hillary Clinton, but am forced to question your sanity. Get off your rump and vote for Trump. the one candidate who cares about American citizens be they native born or duly naturalized and the one candidate who is serious about solving the problem of illegal immigration.It seems to me that individuals,from whatever country and of whatever national origin who have illegally and surreptitiously entered this country or who have remained here after their visas have expired have already demonstrated a fundamental lack of respect for the United States and for the laws of the United States.

Guess he told us, and also proved his point that he'd support Trump's immigration "irrespective of his position on other issues" -- like the multi-billion-dollar cost of a Giant Wall (Mexico will pay for it!) plus finding and deporting 11 million undocumented immigrants and a few million more of their children, and who cares if they're citizens -- maybe we can strip them of that status, too. Still, credit where it's due: Samuel avoided saying "irregardless."

It's a good thing that Samuel warned us that Trump supporters aren't racists, because otherwise we might think unkindly of "Stacie Stevens Markham," who just LOVED the video of a Trump bodyguard ripping a protest banner away from a Latino demonstrator and then punching the Latino guy right in the face, Ha-Ha!

Now that is who you hire to control your rallies, Mr. Sanders! :) I just can't stop watching, lol. I like Trump more and more everyday

Yes, if only Bernie Sanders would start having hired goons beat up a few minorities now and then, he could start getting some support from Trump voters. Ms. Markam also mocked another commenter for using the phrase "white male power," which she dismissed as "right off an MSNBC bi line" -- a nice double whammy of misspelling and not knowing what the hell a "byline" is. She probably thinks it has something to do with The Homos. A quick look at her comment history proves that she's no racist, because blacks and liberals are the biggest racists out there.

And then there's "Yazzy Tedder," our favorite TrumpThumper of the week, who may actually have had a whiskey drink, a vodka drink, and a lager drink, but no cider drinks because those are for fruity Europeans. Judging by the profile pic, we'll guess "Yazzie" is a she; apologies if we have mis-pronouned hir, of course. Yazzy had a lot to say about Donald Trump's non-correction of the guy who said America has a problem, and that problem is named All The Muslims! Very little of what Yazzy Tedder had to say about Trump had much to do with the Muslim Menace (although elsewhere in her comment history that topic does get addressed), and surprisingly little to say about what Donald Trump actually says, for that matter. But gosh, what a pure hit of Tea Party Standard writing style. It's like a teletype machine mated with a Free Republic comment thread and gave birth to a bastard child that was homeschooled by Palins:

GOOD FOR TRUMP...its about time we have someone that isn't afraid to speak the truths, and tell the media's to kiss OFF. Obama has never proven otherwise about his religion..so KILLING INNOCENT BABIES FOR SELLING THEIR BODY PARTS, GAY MARRIAGES..ETC..ETC.. the list is endless is NOT WHAT A CHRISTIAN ( As obama calls himself ..the liar)..believes. Trump said he doesn't have to respond to that question..and i agree with him 110%. GOOD FOR TRUMP...STANDING HIS GROUND AND LETTING THE LAME STREAM MEDIA KNOW he ISN'T TAKING THEIR NBC, CBS, CNN, MSNBC, ETC ...''CRAP''' !!!!!!!!! THANK GOD WE HAVE SOMEONE THAT SPEAKS THE TRUTH ....HE IS A BREATH OF FRESH AIR...AND IF MUZZIES, LIBERALS DON'T LIKE IT..THEY TOO CAN KISS OFF..

Oh, yes, that's the stuff. Because if there's anything that Muslims are into, it's abortion and gay marriage. And while Donald Trump has indeed said that he's now against abortion, it's hardly one of his main talking points. As for marriage equality, Trump has been pretty squishy on that one -- he's against it, of course, as a Republican must be, but it's hardly an issue that he addresses without being asked -- and even then, he's squirrelly as anything. Real Americans like capslock and random punctuation, just like you find throughout the Declaration of Constitution Bible.

We'll just leave the rest of Yazzy Tedder's comments for you without editorial interruption, that you may better allow the derp to flow over you. As with all other blockquoted comments in Dear ShitFerBrains, all spelling, punctuation, and spacing is verbatim:

HA-HA! THE DUMB HAS BEEN DOUBLED!