Deleted Comments Of The Week: Guy Who Murdered Kids Only A Distraction From Planned Parenthood's Crimes! 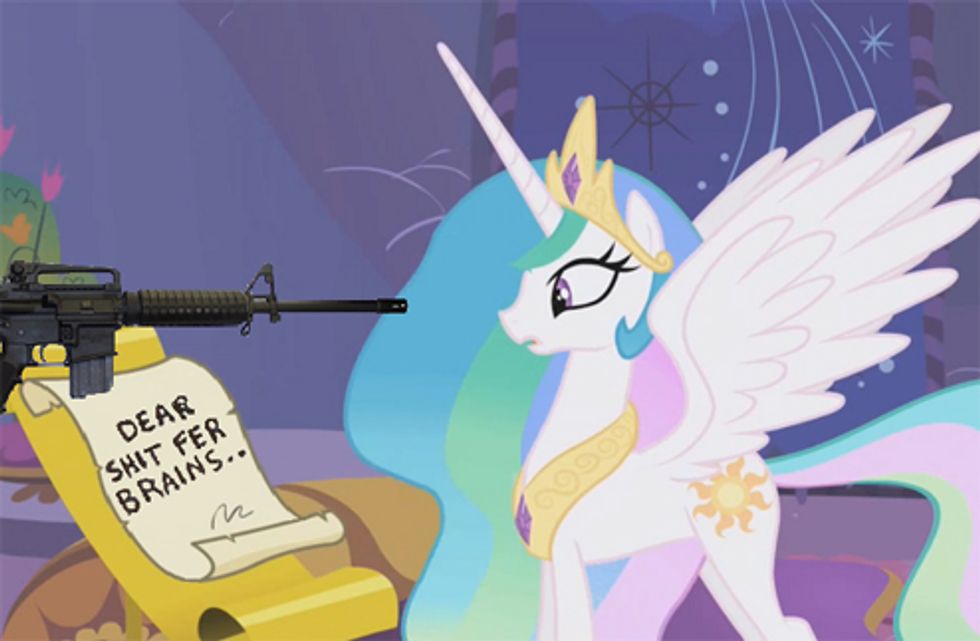 My Little Pony: Friendship is a Plot to Steal Your Guns and Destroy Freedom

Our piece last week on the nice North Carolina dad who was an ardent Open Carry enthusiast (and whose Facebook page was full of pro-gun, anti-Obama, and anti-Muslim messages) who shot his two preschool-aged sons to death drew the usual bunch of Second Amendment defenders who gunsplained to us that the problem isn't guns -- it's never guns -- but it also received complaints from folks with a refreshingly new perspective, if by "refreshingly new" you mean "familiar clichés that we haven't seen in at least a week or two." You see, kids, as would-be commenter "Valerie Emmons" informs us, we are actually huge hypocrites for even being the least bit upset about a drunk man who shot his 3- and 4-year-old sons multiple times after assaulting his wife, because we also support a women's right to choose a legal surgical procedure:

But im betting you fully support Planned Parenthood which takes more lives from children than any gun ever could in this country. And FyI i am prochoice but im also pro-2nd amendment...and have common sense. People drown thier kids..beat them to death etc. Guns are just one means to an end not the only one availible..and yes abortion is taking life.

In some sort of nonsequitur reply to another comment (which we do not allow) about other, more hands-on methods of murdering one's own children, Emmons asked us to do some research, and then we'd understand why easily-available bullet sprayers are honestly no big deal:

How many mothers have drowned their children? Look it up. Bet you support planned parenthood taking childrens lives though huh?

People drown kids and also Planned Parenthood exists (but Valerie is pro-choice), so why care about a horrific murder? Take that, you liberal fools! Guns are never the problem, and you idiots probably want to ban water.

Valerie is not necessarily too worried about "facts;" in a comment on a RawStory post several months back (also about guns, although she does have other interests, like firearms), she came up with this remarkable True Statement: "85% of Americans own guns--and you may be talking with someone face to face and have no idea they are armed." Or maybe, if you want to actually do some polling, that percentage is -- depending on how and when the poll was conducted -- somewhere between 22 percent (people who reported personally owning a gun in a 2012 survey) to 43 percent (people saying that there was a gun in their home, in a different organization's 2010 survey). But no, nowhere close to 85 present among any demographic subgroup.

From "Brent Bostrom," we learned that not only is a dad shooting his preschoolers to death inconsequential compared to the abortion holocaust, but also that thinking it might matter makes us little more than tools of a Planned Parenthood campaign of distraction:

Dollars to donuts Planned Parenthood supporters are pushing the hell out of this story just like the with Cecil. If your soooo concerned about innocent lives, shut the butchery down.

Because a 6-week zygote -- or even an hours-after-conception blastocyst, we suppose -- is pretty much the same as a preschooler. Why would anyone care about a meaningless distinction like whether one has actually been born? We are so prejudiced against pre-viability-Americans.

And then there was "Yougottabeshittingme!!", who explained not only that other items can be used to kill, but that presumably, once America is all fixed and made Constitutional again, one of those items that will be used a heck of a lot will be the noose, or perhaps the firing squad:

Funny how the gun is blamed if it's humans killed. But, it's never the knife that's blamed in a stabbing. It's never the bat or pipe in a bludgeoning death. Or never the car in a drunk driving death. Only when it's a gun is the object to blame over the drunk or mentally ill person using it. Left wing, you WILL ALL be 'dealt' with for tyrannical and seditious behavior!

Glad to see we have a few readers who understand the true meaning of America: dealing with enemies of The Holy Gun through wholesale executions. Sorry, pal, The Turner Diaries really was a work of fiction.

The same article also drew scores of replies from two other really tedious trolls -- or one guy with two accounts? -- who only had a few amusing things to say. One, "SNS77" -- who we suspect may be a dyslexic nuclear submarine -- mostly posted a bunch of boring grammatical nitpicks, complaints that Wonkette had slandered all Open Carry and shooting sports enthusiasts everywhere, and one truly weird bit of goalpost-shifting: In reply to someone who'd joked about the need to address white people's "culture of violence," USS Derpjack replied that there are lots of perfectly acceptable recreational activities that involve deadly implements, but nobody ever smears fans of those amusements as being comparable to kid-murderers:

Archery. Baseball. Darts. Do you also call out summer camps, track and field meets, the World Series, or bar leagues? A cooking knife. A car. We can play that game all day. I'm certain that you'll claim that it isn't the same, but feel free to tell that to family of a drunk driving victim.

Damn, we had no idea that we were so offensive. Also, we suppose that even minimally-qualified drivers are subject to a fair bit more regulation than our well-regulated militia, but no, cars aren't in the Constitution so NOW they don't count as a valid analogy. SNS77 went on to explain that Baseball is on the list of violent amusements because bats have been used in murders, SO THERE. Frankly, we are also unaware of any actual murders of preschoolers committed with darts, but that's clearly more damning proof of exactly how ignorant we are. Yr Wonkette sincerely apologizes to any Responsible Darts Owners who were offended by our article.

Despite some superficial similarities in their preoccupations -- especially with the claim that we were engaging in "identity politics" by suggesting that a lot of Open Carry gun fetishists have a screw loose -- we do think that "LibertyAboveAll" was a separate person from "SNS77." Definitely got more of a Ron Paul Is God vibe from LAA, who complained that Wonkette is an "echo chamber where any dissenting thought is stamped down by the angry sheep... 'Four legs baaaaaad, two legs goooood!'" Why invoke poor Orwell? Why do the crazy libertarians think that an English socialist who railed against the depredations of corporatism every much as he lampooned Soviet communism would be One Of Them? Sorry, dickheads -- Eric Blair was a socialist who would be appalled by you people.

LAA also proved his anarcho-libertarian cred by referring, in about a third of his comments, to the need for every Truly Free American to pack a gun so that they won't be subject to the whims of "the ruling class's enforcers" -- you know, the police. For all that Yr Wonkette dislikes the shit that our militarized cops have pulled in the last decade, we are strangely immune to LAA's call for class solidarity there.

On other topics, a charmer calling himself "freedom 77" -- with a very convincing pony avatar to prove that he fit in at Wonkette -- was Very Concerned that we crazy liberals could ever think that a guy making homemade bombs in his garage could possibly be doing anything other than what his lawyer claimed he was up to: preparing to clear some tree stumps. With homemade explosives packed with nails and ball-bearings, a technique that we couldn't actually find recommended on a single How-To site, but we'll admit we didn't include Stormfront's Home Repair Forum in our brief search. Nonetheless, freedom 77 complained that we were a bunch of fools:

But then someone had to go and post a little jokey Jon Stewart gif:

This resulted in something of an explosive reaction for Freedom 77, who had to set us straight about more than the inalienable right to blow up tree stumps with shrapnel bombs:

That is Jew Jonathon Leibowitz who walked away with 80 million dollars (a 1%'er) for being a gatekeeper for the Status Quo. Meanwhile his Brother Larry Leibowitz left being the COO of the NYSE and made hundreds of millions off such things as Enron, 911, and, the Stock Market collapse of the early 2000s.

Why would he change his name? To hide his 1% jewness. He is a scummy 1% scum bag who you worship and think you are trendy. Pathetic.

Thanks, Freedom 77! We longtime Daily Show viewers had absolutely no idea that Jon Stewart was Jewish! He sure was careful to never let that slip. On the other hand, let it never be said that we don't learn things from our wingnut visitors. We really hadn't been aware that Jon's older brother Lawrence had been the COO of the NYSE. Even more surprising was Freedom 77's revelation that the Jew-Controlled NYSE actually makes tons of profits from stock market crashes and terrorist attacks instead of from stock market booms, but maybe we're simply naïve about the Jews' Real Plans. Still, thanks to Freedom 77, who appears to have gotten his Liebowitz Brother Facts from this charming little chunk of paranoid internet detritus, or something very similar.

We're always on the lookout for new sources of rightwing crazy, and this "Help Free the Earth" site is a freaking treasure trove, including a panicked warning about a parody "children's book" called Do You Want To Play With My Balls? -- it's about as much of a "children's book" as Go the Fuck to Sleep is, but these brave patriots seem to have missed the joke, calling it a "XXX children's book," warning it comes from the same Semitic-ruled entertainment sewer that produced 50 Shades of Grey (Twilight fanfiction?), and noting ominously that "You can get it at Amazon.com and guess who owns Amazon.com?" (let us guess: The Jews? No, the Illuminati! Or maybe the Jewish Illuminati Freemasons?)

In any case, thanks for the unintentional web-search laughs, Freedom 77. You keep doing you, and keep spreading the truth about Jon Stewart's role in the financial crash and 9/11. And we'll keep laughing at you.