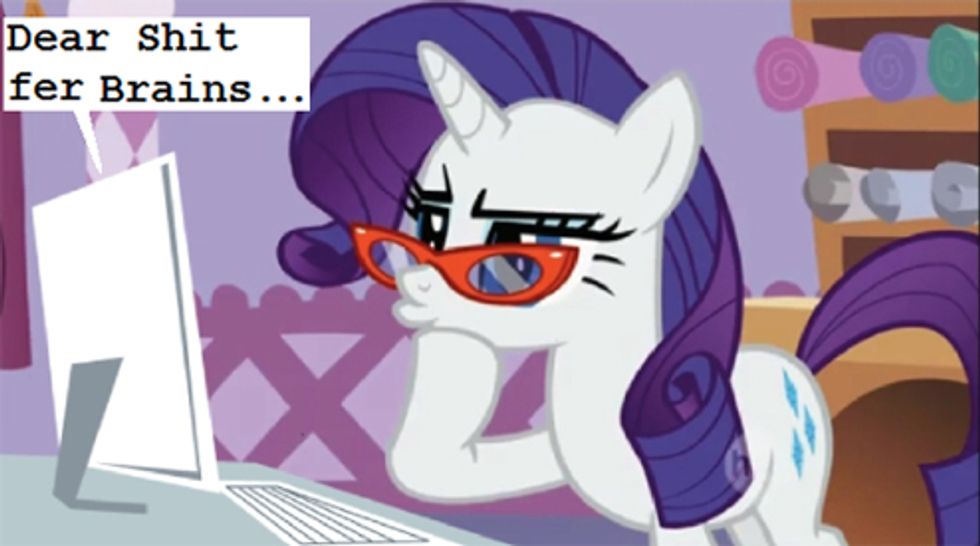 [contextly_sidebar id="gqw7mwDS6qvL4KvtKFH34qicGadnxpfg"]It's a brand new year, and a brand new iteration of the same old bunch of angerbears in the Wonkette Comments. Our featured comments are a little out of the ordinary this week, in that the howls of rightwing derision actually had some basis in reality. It turns out that after we published our Tuesday story on arson attacks against mosques in Texas and California, as well as the beating of a 69-year-old Sikh man in California, an arrest was made in the Texas arson: Gary Nathaniel Moore, a member of the storefront mosque burned in Houston, was arrested and charged in the Christmas Day crime.

Needless to say, this excited much schadenfreude in the Wingnuttosphere, which predicted that the mainstream media would never correct the record (as the wingnut blogs linked to stories at NBC and the Houston Chronicle about Moore's arrest). Our own story was singled out by Newsbusters as "the winner for obnoxious left-wing blogging," which was nice. We like winning. We were also gratified that they boldfaced our line about the arson fitting the seasonal sentiment in "Isaiah 9:6, “For unto us a child is born, unto us arson is given," because we were pretty pleased with that one. We've updated the piece to indicate that a member of the mosque was arrested in connection with the Houston fire.

Needless to say, the Newsbusters piece inspired a few members of the Online Wingnut Flying Monkey Brigade to stop by and tell us that we were hateful idiots for even suggesting that the mosque attack could have been an anti-Muslim crime.

"Aldridkg" enjoyed pointing out that we were wrong, wrong, wrong: "Except that the mosque was burned down by another Muslim who attended that mosque. Anyway we can get you to stop writing nonsense?"

Two other commenters simply posted links to the NBC story, while another posted a link and added "sorry to disappoint you,, I know you wanted it to be a white conservative Christian."

And one "Trader 67" had a satisfying laugh over how leftists are always wrong: "LOL, the loons here on the left proved wrong again. The author being the biggest one of all. What a shocker!"

Conspicuously absent from both the Newsbusters article and the comments was any mention of the other two attacks covered in the article: obviously, the fact that one arson was an inside job proves liberals are the real haters. (Also, please ignore all the comments on the Newsbusters article saying "Burn them all!" and the comments insisting that the Houston mosque -- like all mosques -- is nothing but a cover for planning terrorist attacks). We're looking forward to any evidence that Mr. Moore also firebombed the California mosque and beat up an old Sikh who he thought looked like a fellow Muslim. Those false-flaggers are awfully clever.

As Kaili said in our 2015 Yelling At the Media roundup, "We try to never be wrong, and when we are, we apologize immediately." And so we apologize to the wingnuts of Texas, who have definitely marched around mosques with guns, posted online lists of people they suspect of being pro-Muslim, been terrified that Muslim cemeteries are the first step in imposing Sharia, protested against Muslims who gathered to condemn terrorism, and shouted down Muslims singing "The Star Spangled Banner." But apparently they're blameless in the December 25 mosque arson. Wonkette regrets the error, and can't imagine how we could have jumped to that mistaken conclusion.

We did receive a couple of longer meditations on our Total Wrongness, from one "Operator 99," who explained that there are pretty much no real hate crimes ever, just a bunch of whiny minorities who keep hitting themselves to make white people feel guilty:

Actually, the VAST majority of those headlines you superficially glance over, are later found to be self-inflicted for sympathy- or financial gain. 98%+ of Black Church Burnings these days are the same.

Yet, the ACCUSATIONS and speculations of the White Christian Male running rampant over the poor minority community make Page 1. The retractions and the truth, make page 38D weeks later. Next to the CVS coupons. And that is by design.

And prejudiced people like you lap it up, until the fake narrative proffered by the MSM becomes the reality in your minds. Progressive-minded people have always been the easiest to fool, as they lead with their emotions. All the while, claiming the mantle of intellectual superiority. It's why Lenin called people like you, The Useful Idiots.

And it's why Libertarian-minded people like me will always seek the REAL facts, the stats, and the truth. I will never allow myself to be a useful idiot of the Media, or the mob.

Damn, we wish we could be as smart as he is. If we were, we'd be able to find a citation for that "98%+ of Black Church Burnings" are committed by members of the churches. Or maybe by "these days" he only means the series of fires set at churches in the St. Louis area in October. Those were definitely set by a black guy. And once again, "Operator 99" didn't quite provide a bit of evidence that even a significant fraction of the dozens of hate crimes against Muslims (and a few Sikhs, for looking suspicious to bigots) since Paris and San Bernardino were actually hoaxes. Perhaps instead of wasting his time complaining to a liberal mommyblog, Operator99 should alert the Fresno Police and have them interrogate that elderly Sikh man until he confesses to beating himself up and breaking his own collarbone.

Operator 99 also had this definitive disproof of something we never actually said. In discussing the December 5 vandalism a Sikh temple, in which 20-year-old Brodie Durazo confessed spray-painting “Islahm [sic] Fuck ISIS” on the building and a nearby truck trailer, we left out something VERY IMPORTANT, according to Operator99:

The more you read this idiotic article by Dr. Zoom, the more moron nuggets you find!

..."20-year-old Brodie Durazo, who was arrested and later apologized to the congregation for being a violent bigoted idiot...."

Except, far from the "white bigoted male" stereotype exclusively offered up in this brilliant editorial, once again...the pesky truth gets in the way. Turns out, Senior Durazo was confirmed by the Anaheim Police to be a member of the "SSBP"...South Side Barrio Pobre Latino gang. And most of the graffiti left on the building, was typical gang markings.

The amateur who wrote this lame tome seemed to know enough details about the case to comment here...but just happened to leave out that critical piece of info...that it WASN'T some white racist. Well, since leftist ideologue hacks had to coin the term "white-hispanic" to fit their narrative of systemic racism, so maybe he is applying that here. One thing is for sure. It wasn't Bubba in his Ford 150 with the gun rack...

Once again, my apologies for the diversion into reality. We now return you to your regularly-scheduled white bigotry fantasy programming...

Never mind that nowhere in the piece did we claim that Durazo was white, or a conservative, or anything but a bigot. In fact, we pretty much assumed that with a last name like Durazo, he probably was Latino. And no, we didn't call him "white-Hispanic, either." What we called him was an anti-Muslim bigot, which seems pretty well supported by his having conflated a Sikh temple with Islam and with ISIS. As for the fact that the vandalism of the Sikh temple was perpetrated by someone who wasn't a member -- same for the December 11 firebombing of a Coachella Valley mosque -- we might suggest that maybe those facts argue against the notion that over 98% of such events are merely minorities trying to look like victims. Or perhaps these two examples were the only attacks that weren't inside jobs.

In any case, that was a pretty good catch, calling us out for that thing we never said.