Deleted Comments Of The Week: Oh God, Not Another Hillary-Bernie Thread! 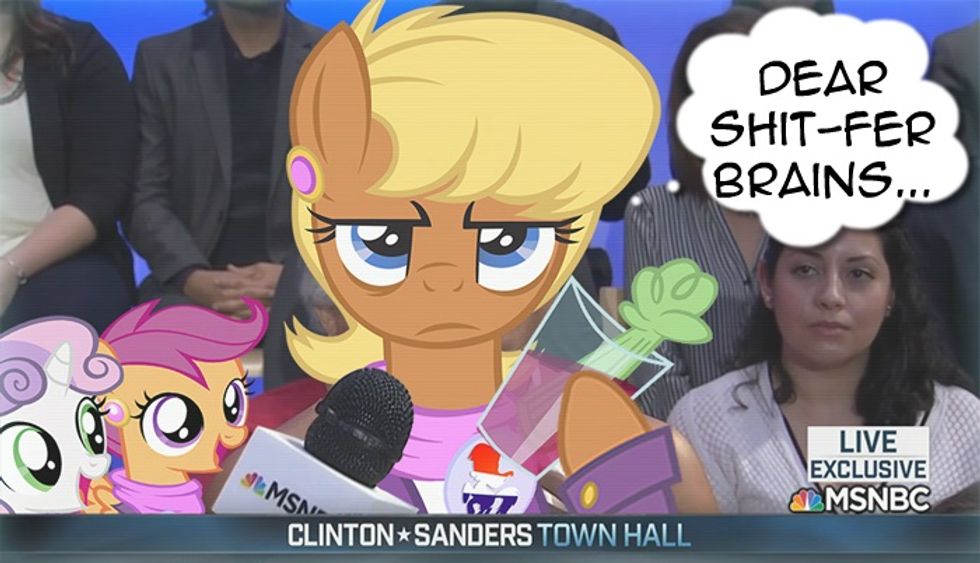 Oh, it was a wild week, wasn't it? Our stories on the Nevada Democratic Convention and Bernie Sanders's subsequent not-pology both blowed up into a fuck-tussle of shoutiness, and people were Quite Upset Indeed. It's finally settled down, so here comes Yr Sunday Dear Shitferbrains to stir it all up again, oh dear. Yr Friendly Neighborhood Comments Moderator tried, as much as possible, to step back from the fray and let conversations proceed, even if they got testy, because folks needed to talk it out. In general, we tried to swing the Banhammer of Loving Correction (© and ™ John Scalzi) as little as possible, weeding out only comments that were excessively outrageous. And we'll admit a certain bias -- not so much political as tribal: we gave longtime commenters a lot more latitude than we did people who showed up out of nowhere and started flinging invective. So let's see whose sacred First Amendment Rights we trampled this week!

There was "BKE," who offered this plague o' both your candidates rant:

As we said at the time, we weren't sure whether to banhammer BKE immediately for safety's sake, or to keep watching in horrified fascination. Within minutes, BKE helped us make a decision right quick. In response to another comment, which we don't allow anyway, BKE wanted to make clear why talking about piling up bodies was perfectly OK:

Killing nazis doesn't make you as bad as a Nazi.

The problem, we think, is when you assume everyone who disagrees with you is a Nazi, and needs to be eliminated. Also, we love the irony of someone who thinks the New Deal was brought about by radicals busting cops' heads complaining that someone else is unschooled in history, when the reality is that FDR helped capitalism save itself from its own excesses. (Calm discussion of the degree to which the fear of real revolution spurred the New Deal's reforms is welcome in today's comments.)

We also had a string of comments from "Jayp777," a fine Trump Troll, who was pretty certain most Bernie Sanders supporters would be so upset by Hillary Clinton's subversion of democracy that they'd rally to support an actual fascist:

Bernie is pro-amnesty and for the NWO, he is a traitor as much as Clinton, but in a way to a lesser degree. The one thing positive about Bernie is he doesn't have financial ties to known terror state like Saudi Arabi and Iran, unlike the criminal Hilldog

Trump is pro-sovereignty, and the smart Bernie voters and true Americans will realize that. Allowing illegal immigration is a way of giving up your sovereignty.

After a couple more mentions of "sovereignty," a Wonker rolled out the inevitable Inigo Montoya line; "You keep using that word. I do not think it means what you think it means." Jayp777 has apparently never seen The Princess Bride, which may have been reason enough to banhammer him:

You don't even know what it means, along with Hillary and Bernie supporters. Just a bunch of naive children.

A few other gems from this would-be Trump recruiter:

He seems nice. Oh, and also completely wrong about Mexico having a wall on its border with Guatemala. Imagine that! We also liked this exchange of witticisms:

Wonker: Nonsense. Benghazi is the name of an ongoing republican clusterfuck

Jayp777: Say that to the 4 dead americans and their families

So there! How dare you crazy Wonketteers insult the honored dead of Benghazi by dragging politics into this, you monsters!

There was "Jamroast," who had an EXCELLENT reason for preferring Donald Trump to Hillary Clinton:

Hillary was on Goldwater's staff.

She only changed parties when it was politically expedient for her, typical Hillary.

We weren't aware that Goldwater actually had high school students on his staff. If you want to bother with mere reality (seriously, people, you can look this shit up!), Hillary wrote a term paper on Goldwater after her 9th-grade history teacher urged her to read Goldwater's Conscience of a Conservative, and then, she wrote in her memoir Living History,

I was also an active Young Republican and, later, a Goldwater girl, right down to my cowgirl outfit and straw cowboy hat emblazoned with the slogan "AuH20." … I liked Senator Goldwater because he was a rugged individualist who swam against the political tide.

Then she went to Wellesley, where, like the lifelong cynic she was, she became a liberal and worked for Eugene McCarthy in 1968, then masqueraded as a liberal for the rest of her life, except for how she murdered everyone who got in her way. But really, deep down, she's still a Goldwater Republican, because whatever someone thinks in high school, that's how you are the rest of your life, and certainly Hillary Clinton is the only person whose political alignment ever changed in college. This is a simple Science Fact. Now, if you'll excuse us, we need to go start writing for Breitbart, because in high school we really hated how Jimmy Carter took all those hostages.

We were especially amused by one "Philo Farnsworth," whose first post closed with this indisputable statement of objective fact:

If Trumps elected there will be only one group to blame, the cheating DNC & the low information sycophants that support them. Feel the Bern or Bern it down!

Philo then proceeded to explain to everyone on Wonkette what morons we were:

Oh, but when someone called him a troll, he became very indignant, replying "You're biggest troll on here wtf are you talking about." We jumped in and pointed out that if someone suddenly arrives in a comment section and starts calling all the regulars a bunch of idiots, that's pretty much the living embodiment of trolling. This did not set well with "Philo," who felt moderators should be completely neutral on such matters:

So I've been warned by the "moderator " that its perfectly acceptable for hillabot wonkettes to attack me but if I defend myself I will be booted. Does the DNC control this site too?

When I pointed out Rule 5 in the Rules for Commenting Radicals -- basically, the one that says "you may get banned for pissing off the moderators or one of the dogs" -- Philo was incredulous, asking why on earth I was treating him as if he were the troublemaker, when he was merely expressing his opinion, and all these Wonkette trolls were being mean to him. I pointed out that he arrived here calling everyone "low-information sycophants," complimented him on his wise choice to kick dirt on the umpire's shoes, and tapped him with the Banhammer. Not long after, I got this email from Philo:

Your history of banning pro bernie supporters while ignoring the relentless trolling of prohillary "regulars" is unfair. Especially considering that you call yourself a bernie supporter. My only request is that you as a "moderator" be even handed and address the bullies that you call regulars on a site that's supposed to be a liberal outlet. It's apparently fine for "regulars" to call people dumb ass & shit for brains but if I respond with any form of sarcasm you take issue with it. That's not exactly being moderator as much as an enabler. EVERYONES voice should be heard equally, especially by a moderator!

In my defense, I'll point out that I warned several regulars that it's not their job to tell other regulars to GTFO of "their" Wonkette (possibly because I don't want anyone encroaching on my job), and that at most, I only banned maybe five of our new visitors who got especially out of hand, and no regulars. But yes, one of them was Philo, so the moderation here really is heavy-handed.

It was only after I'd sent him away that I found this gem from Philo, in reply to another commenter:

No one still think s the official 911 story is accurate. Do you REALLY believe that? I mean that would explain a lot about your politics.

Damn it, you worthly Woket skum, why won't you let people engage in reasoned debate on the issued of the day? This entire blog can be shipped to Afghanistan, no one has lost any...

In the midst of all this kerfuffle, we came across some reassuring news for all y'all who worry that the Dems are coming apart at the seams, the Bernie-or-Bust hardliners will throw the election to Trump, and the Kids Are Not All Right: The latest CBS/New York Times poll finds "72 percent of Sanders supporters would vote for Clinton against Donald Trump." Which is what a lot -- but not all -- of us Bernie supporters at Wonkette have been saying all along, though perhaps not quite as loudly as some of the new arrivals who want to burn everything down. That's actually better party unity than in May 2008, when only about 60 percent of Hillary Clinton supporters said they planned to vote for Barack Obama in the fall -- of course, that was also before John McCain chose that one crazy person from Alaska as his running mate. This time around, the loony is at the top of the R ticket, which does wonders to focus our attention.

And finally, this epic twitter exchange whose beginning actually predated the Great Hillbot/Bernie Bro fight of last week, but which seems appropriate for this thread. A gent whose Twitter nym is "darth dicnballz" demanded JUSTICE from Yr Editrix, but wasn't quite willing to let us know who the hell he was so we could see why he was banned in the first place:

Dag, man, can't get any decent customer service around here, what a bunch of useless assholes.

And of course, this is where we would like to remind you that we love you all, regardless of who you support (unless it's Trump, in which case the best we can manage is "Well bless your heart"), and we would like to call your attention to the Rules again. Be kind to each other in the comments, please. The most important rule is to please not be dicks to each other.