Deleted Comments Of The Week: We Hear From All The Experts On Buttsex 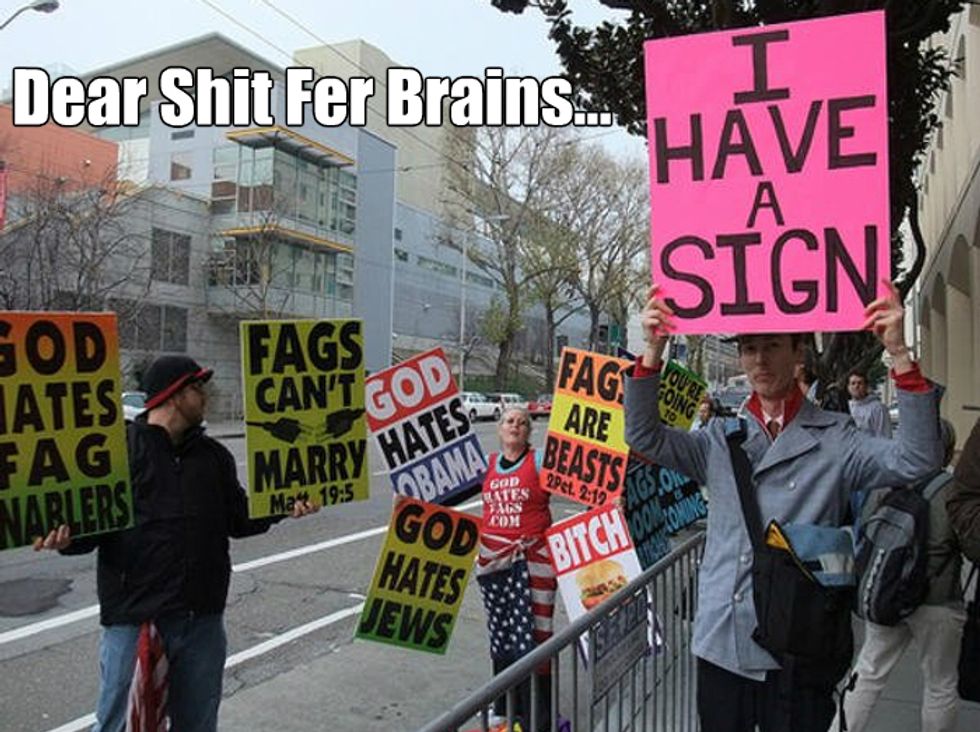 It was a tie between this and a guy with a sign saying 'Bring Me A Shrubbery.' But that one was out of focus.

It was a weird week for deleted comments. We had a lot more than usual, thanks especially to a guy who may have set a record for most troll posts before getting deleted -- roughly 200 mostly one-line gobbets of idiocy. For some reason, this was the week for serious freakouts about how The Gays are ruining America, starting with some reactions to our story on a Tennessee proposal to wish the Supreme Court's marriage equality decision into the cornfield. "LiberalsHateAmerica" offered some perfectly fascinating insights:

We get the feeling that "LiberalsHateAmerica" spends an awful amount of time thinking about buttsex, is what we think. Not too surprisingly, he also doesn't like a whole bunch of other people, either!

Obama's base consists of the following groups:

Blacks who want welfare and racial preferences, Hispanics who want welfare, racial preferences, and amnesty for everyone with brown skin, limp wristed homosexuals who want their deviant lifestyle validated by society, single women who want society to pay for their birth control pills and abortions, union th*gs who want to legally extort as much as possible from the taxpayers, reform "Jews" whose "practice" of Judaism consists of bashing Christianity and whining about the Holocaust, unemployed people whose idea of a job search is sending their resumes written on a napkin to two random companies per week, jihadist Muslims who take advantage of the left's idea of tolerance (even for people who want to kill them), atheists who are offended by a God they say doesn't exist, people who think guns are evil and that murder is impossible without them, environmentalists who think that a winter storm is proof of global warming, pathetic lazy losers who worship recreational drug use, and finally, disingenuous white liberals who use the others as pawns to gain power. In other words, parasites who make America worse.

I came up with it originally. People have copied me. What can I say? I speak the truth.

We're perfectly willing to believe that LHA did indeed write that comment himself, because when we did a bit of searching, we found that it had been posted by a whole bunch of "other people." People with Disqus usernames like:

And that's only a sampling. Would you be astonished to learn that virtually all of these completely different people's comment histories are full of variations on the phrase "one man (verbing) his (slang term for peener) into another man's (slang term for fartbox)" and how that is something terribly damaging to America? So not only is this twit an unoriginal dickweed, he's also an unoriginal dickweed with something like twenty Disqus accounts, several no longer active. He may not be very bright, but you have to at least acknowledge his commitment.

Despite his fondness for copypasta, LHA did at least take the time for a few replies to other comments (which aren't allowed in the first place), like this knee-slapper in response to a reader who said "It pains me that I spent years of my life freezing my ass off in Germany and Korea protecting the unworthy such as this moran."

Interior decorating the barracks after the repeal of DADT doesn't count as military service, you queer.

We would feel sorry for LHA's family, but we're guessing he's really married to his cause. Which is an intensely stupid cause.

We think that, with roughly 200 comments in a few hours, A Idiot posting as "lonestar91" may have set a Wonket Record for most posts by one moran in a single day, although we don't actually keep track. They were all in reply to two stories by Evan: our piece on the terrifying prospect of the Duggars returning to TV, and the story of the Catholic boys' school in Tennessee that went nuts when a student asked a boy from another school to the prom. The saddest thing about lonestar91's epic run of comments was that it was not especially quotable. You get a pretty clear sense of his thought processes from just a few of the things:

Strangely, while he asserted several times that he was definitely not a Christian, lonestar91 also insisted that a couple of other commenters couldn't possibly be Christians, since of course they were defending gay rights, and real Christians can't do that:

And of course, ultimately it came back to the buttsex and the alleged threat to children. Yes, in a story about a straight guy who molested his own sister, lonestar91 kept asserting that The Gays are all out to do bad things to children:

Also, he proved that "homophobia" is not really a word because it was coined in the 1970s by homosexuals, SO THERE. The accurate term, he suggested, would be "banana crammers." We have to confess that we would love to see this guy locked in a room for a few hours with a dozen linguistics professors, but we can't think of any linguistics profs we hate that much.

The story on the Catholic school also elicited some wisdom from a nice fellowposting as "larryx;" we never knew that Malcolm had a dumb, homophobic brother. At least he was brief:

Frankly, after the epic spews of lonestar91 and LiberalsHateAmerica, we have to say that those were pretty sad efforts. Is larryx even trying at all? Where's the lengthy meditation on people doing sex in the butt? We're starting to doubt his commitment to the cause, really.

We also had some interesting deleted weirdness from a Trump supporter who knows everything -- she explained that she very conveniently happened to be a former liberal democrat (and ACLU/NAACP member) who has extensively studied Islam, travelled in Kenya, and also worked as an Equal Opportunity Officer, and knows for sure that Trump supporters are not bigots. Should we find ourselves willing to revisit her madness, we may throw a bonus midweek Dear ShitFerBrains at you. Or we may just never mention her again.