Deleted Comments Of The Week: Wonkette Got Its Very Own Rooshian Troll! 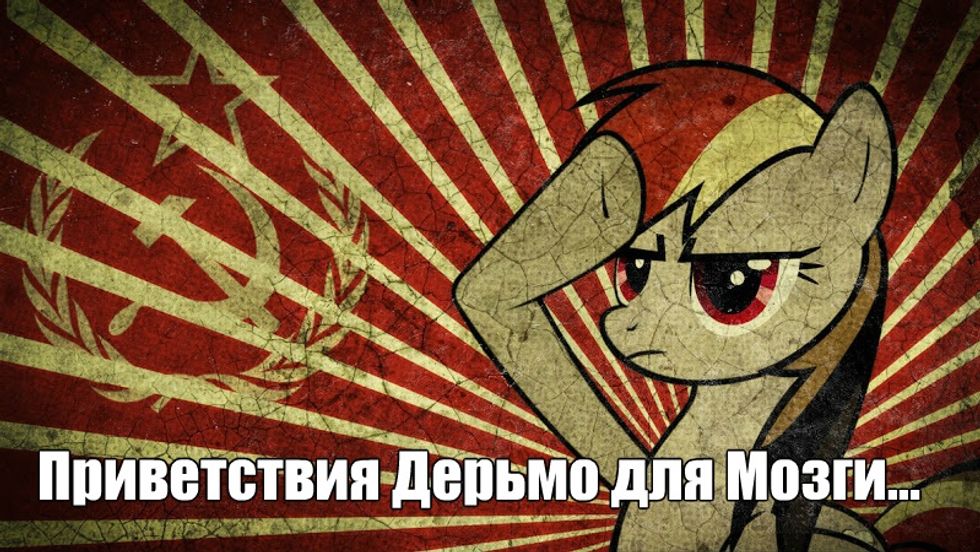 Yes, yes, we know the USSR is defunct. Whatevs.

Man, you take a weekend off after the conventions, and the ShitFerBrains really piles up! We have more ShitFerBrains than we know what to do with! So much, in fact, that we may simply have to give you a midweek Dear ShitferBrains if we get around to it. OR MAYBE WE WON'T. WE PROMISE NOTHING. Out of the many very annoying trolls we got this week, there were several who managed to both completely monopolize comment threads and say nothing particularly worth mocking here. Pretty sad, really -- all that deletia, and so little of it worth actually paying attention to (and yet you did, Wonkers. Why? WHY? It only makes them respond with more idiocy!)

But we were at least treated to our very own Russian Troll, "Mixa Klimment," though we aren't sure whether this was actually one of those paid Rooshian trolls who masquerade as American conservatives -- for one thing, Mixa's IP address actually placed him in the Russian Federation, and he also posted links to a number of YouTube videos in Russian. Our impression was that paid dezinformatsiya experts make at least a token effort to hide their tracks, but who knows? Hell, maybe "Mixa Klimment" is an American admirer of Putin and Trump who spoofed a Russian IP address? Or simply not very good at the trolling? Who/whatever he is, "Mixa Klimment" is a prolific spammer, posting the same set of comments all over the web -- which made us feel a little less special, honestly. Some of "his" comments even show up on articles what ain't even in English, like this Indonesian website.

The budding bro-mance in cyberspace of three unlikely idiots with an inferiority complex.

Mixa was at least a somewhat creative (that may be stretching the word) multi-media troll, or maybe a semi-creative bot, so it seems worthwhile to document his/its efforts, which -- appropriately enough -- were posted to our story about whether the Wikileaks hack of the Hillary Clinton campaign emails was a three-way collaboration between the Trump campaign, Russian hackers, and Julian Assange. As we say, Mixa wasn't especially subtle, as we saw in his very first comment on the thread:

What I do know is that Putin is authentic, the type who wins wars, a courageous leader who has shown up the West as a paper tiger. Putin is TRUE leader!!!

That there video is some impressive weirdness. It's so completely over the top that it also leaves us wondering if, per Poe's Law, the Mixa Klimment account is some kind of performance art or trolling for its own sake. Or maybe a really enthusiastic volunteer troll? Your guess is as good as ours! A comment containing "polling data" insisting that virtually everyone in Crimea was happy about being annexed by Russia suggested we might have the real deal, though.

There was also this suggestion that wherever the hell Mixa is -- somebody thought Ukraine -- he somehow wasn't already Russian:

I'm very impressed by Putin. He should be our leader and not this psychopath █▬█illary Clinton.

To confuse matters -- or simply for the hell of it, that vid's YouTube description includes a bit of Korean: "미국 대선주자의 개소리," which the Google machine translates as "Bullshit of US presidential hopefuls."

Moreover, there's this awesome praise, again with a video in Russian, but no Korean in the description:

Putin is the kind of man other men want as a buddy. He’s real. He has a clear mind. He has a sense of humor. He’s not full of himself. He knows where he’s going. He loves his people. He’s a standup guy. He can’t be bullied. He’s a rugged individual. He loves animals and abhors criminals. He’s been a good father. He’s a patriot. He’s a fast thinker. He’s a good communicator. He says what he means. He means what he says. He’s generous. He’s polite. He’s responsible.

Those attributes used to be what Americans cherished as ideal qualities.

I envy the Russian people.

The video description has exactly the same text, with one notable difference; right before "I envy the Russian people," it includes the line "The representatives of America are anathema to me," which doesn't at all sound like it was generated by the Ministry of Clumsy Propaganda. Or someone doing a really spot-on imitation of same.

Then there was this convincing explanation of why so many Russians are Feeling The Poot, again with a video:

To everyone who says Putin is a dictator, you don't know what you're saying if you have not been to Russia. Most of you probably spend most of your time on your laptops, probably getting your information about Putin from Wikipedia, Western news sources, or what you hear. The Russian people actually like Putin, and they voted for Putin over their other choices for candidates. He gets stuff done, and he has a very strong personality, and that's why Russians like him.

This video's "description" is actually an article cribbed from Newsweek.

Not every comment from ol' Mixa included videos; some included beautiful images!

Here's the weird thing that makes us think Mixa was at least a human being cutting and pasting phrases from a preset menu: The booger also replied to a few comments, but with phrases that also can be found elsewhere online, word for word:

What finally convinced us we had a real live person on the other end of the 'puter was the very small number of replies that appeared nowhere else, at least not that we could find. Some Wonkers began trolling back with Google translate; like the Wonker who wrote "Клинтон будет иметь шары Путина" (return translation is "Clinton will be Putin's balls" -- maybe they were going for "own" or "take" his balls? That actually got what looks like a unique response, even though it sounds canned:

The DNC is a CRIME FAMILY against America!

And there were one or two other unique replies that persuaded us we had a live human being, albeit something of a dipshit, like "What are you smoking? Where do you get your news? CNN?" and a couple where our guest forgot to run their own reply through a translation algorithm. Go figure!