Deleted Comments: Oh, Goody, It's Time For 'Pro-Lifers' To Carry Out Some Vigilante Justice 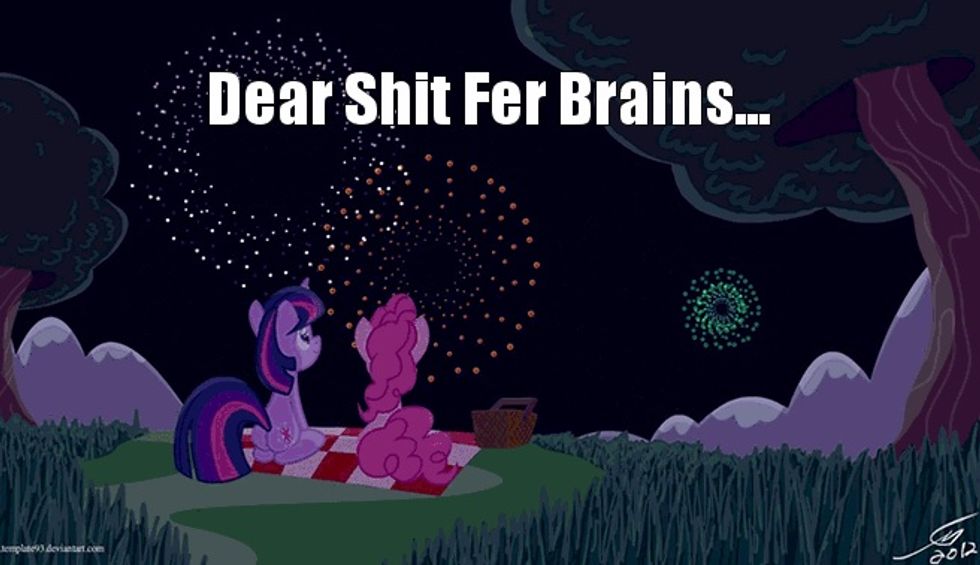 Happy Third Of July, kids! Hope you're ready for some verbal fireworks from our deleted commenters, even if they mostly misfire. Some of them sputter entertainingly, at least.

Monday's big Supreme Court decision on Texas's terrible abortion law brought some predictable grousing about how this will inevitably be the LAST STRAW for "pro-life" folks, who will have no choice now but to start a new civil war or something. Deleted commenter "PaulJones6482" apparently forgot -- just like Ben Shapiro did -- the cover story that Texas's law wasn't actually meant to restrict abortions, but to "protect women's health." Then again, "PaulJones6482" isn't entirely in favor of healthy ideas anyway:

Yay, the baby killers on the left can try to murder more babies. Well maybe the people need to carry out some justice

Antonin Scalia did not get to write a dissent, because the devil won't let you do that in hell.

That seems reasonable: if the courts don't rule to protect life, time to start dispensing vigilante justice. Just in case there was any question about PaulJones6482's intention -- like maybe he meant "time for some nonviolent sit-ins!" -- he also commented at rightwing website CNSNews (on a story about marriage equality), "Now is the time to pick up weapons and fight back." And no, he didn't add that he meant "spiritual warfare." In his brief visit to Wonket, PaulJones6482 had some other smart ideas!

Let's say it together: He seems nice.

We also heard from one "Jonathan White," who was very unhappy with our piece on Elizabeth Warren endorsing Hillary Clinton. We think maybe he's got some anger management issues:

And now everything is hunky dory and people are being SO NICE to Sen. Warren, obviously.

We understand the Trump campaign is looking for a new digital consultant. Mr. White's comment history is a treasure trove, too, with multiple posts on articles about Hillary Clinton calling to "Hang the witch," and this vow at Breitbart which seems like it might be more of a potential threat to a presidential candidate than a rude t-shirt:

On the off chance she gets elected, I'll do America a favor and kill her anyway

Gosh. He seems nice, too!

Jan Brewer Is Just Like, Really Hurt That You Keep Calling Her And Trump Racists And Bigots

Not everyone who got the banhammer this week was quite so horrible; some were merely bloviating twits who happen to know that Donald Trump is not a racist, you hate-filled liberals. Take for instance "randallstarr," who protested that there is no evidence whatsoever that Mr. Trump is a bigot, because what he says happens to be true:

How is it a "true fact" (great writing btw) that Trump is a racist? I'd love to hear this. Hardcore liberals like you have resorted to calling people racists and bigots in the place of effective arguments. I'd love to hear you write an article on policy and why one candidate's better suits America today. But you retreat from the debate when you call your opponent names -- especially when more than half the country disagrees with you? So what's more likely? That half the country is undoubtedly wicked people filled with hate? Or that our biased media, agenda-driven and agenda-funded entertainment industry, and insidious political rhetoric have your head in a spin of who to like and who to hate - and don't realize you're a cultural Marxist.

"...suggesting that Mexican immigrants are all rapists" Now you're just outright manipulating your audience for profit. He said that rapists comprised a large percentage of ILLEGAL Mexican immigrants, who often have a record on both sides of the border. THESE ARE FACTS. That's what he was speaking of, but when you just take "they're rapists," which he did say -- but choose to ignore the true context you've resigned from honest journalism and have adopted the Marxist approach of lying to the people because the ends justify the means.

The right states facts that are supported by immigration, gun, and crime statistics and the left ignores the facts wholesale and adopts a national campaign of name calling and using the R-word rather than facts that support your brainwashed position. I challenge you to write an article that's actually political in it's content, includes facts, sources, and is devoid of name calling or whining. It'll improve your writing, and people will take you more seriously!

Well, actually, what Trump said was that the government of Mexico is sending rapists and murderers across the border, and that "Mexicans" born in Indiana are incapable of being fair judges because Donald Trump is going to build a wall. But he said that stuff in a factual, unracist way. Also, gee, we sure do whine a lot, because we are brainwashed cultural Marxists who can only parrot slogans.

Eventually, randallstarr flounced, because we were wasting his time by forcing him to read our blog. And man, did he ever hit us right where it hurt, right in the pageview revenues:

Oh, wow, that's it. I'm done generating traffic for you and making your terrible article interesting in the comments. That is truly vile behavior, and you feel completely justified in departing from human decency since you feel I'm racist. I've never met someone as vile, and uninformed as you. But you don't need to be informed to be a shitblogger. You just say "racism" and you attract the other dolts. You will reap what you sow, I've never come across such juvenile crap from someone claiming to be a political journalist, you are getting very defensive and have used character assaults and utter vileness to put me down. Look at my words. Did I say anything of the sort about you? You are vile.

We should probably note that randallstarr was replying to other readers, not to Evan, who wrote the piece. Dammit, Wonket why don't your vile commenters write better journalism?

Ah, but before that flounce, someone looked at randallstarr's comment history, and pointed out this bit of brilliance he'd posted in reply to another blog:

Luciferian Zionism rules our world, orchestrated through the devilish Cryptocracy achieved by the Masonic Gnostic Rosicrucian elite doing their dark work on the masses while the Red Shield takes everything you have, and the corporate world takes nearly everything our Mother has, or had.

When the Wonker mocked him for it, randallstarr was not impressed:

You don't even understand those words, and call it stupid? It would take you a month or more to research those in detail, and then you can argue with me on that subject.

Gosh. We wish we were smart enough to keep up with randallstarr. Needless to say, if you scroll down a ways in his comment history, you find he's a creationist, too. So pretty much a modern Renaissance Moran.

The GOP can't be bothered to save the Zika babies, because they're too busy saving the babies from Planned Parenthood! Wait, what?

Finally, our story on House Republicans' attempt to defund Planned Parenthood in the Zika funding bill brought this angry reply from "Lisa Walz," who created a Disqus account to say,

Talk about piece of shit, Evan Hurst! Let's completely overlook the fact that if the liar, loser dems wanted to really pass Zika legislation, then they wouldn't have bundled planned parenthood into the bill. But naturally your readers are too stupid to understand that and like the liberal piece of shit that you are prey upon the stupidity of your party -- I mean isn't that how all you losers get elected?

We have to like the suggestion that it was lying loser Democrats' fault that the Republicans had to delay the Zika bill for four months, and then had to bundle Planned Parenthood funding in there, just to prove how terrible Democrats are. Unless she thought Democrats had put the PP funding in there -- that's a pretty ambiguous "they." But that's nothing compared to the glorious derp of "isn't that how all you losers get elected?" Yes. If only the real winners would get elected instead.

Then once she was banhammered, the victorious smart winner "Lisa Walz" deleted her one-comment account.

That's all. Don't you people have some barbecues to attend to?

Follow Doktor Zoom on Twitter. Also, please don't feel slighted if he doesn't upvote your comment: his Disqus account is borked, and his upvotes don't "stick." Just assume he upvoted your comment (which we don't allow) because you were wonderful and brilliant.