Deleted Comments: So John Lewis Got Hit On The Head That One Time. Big Deal! 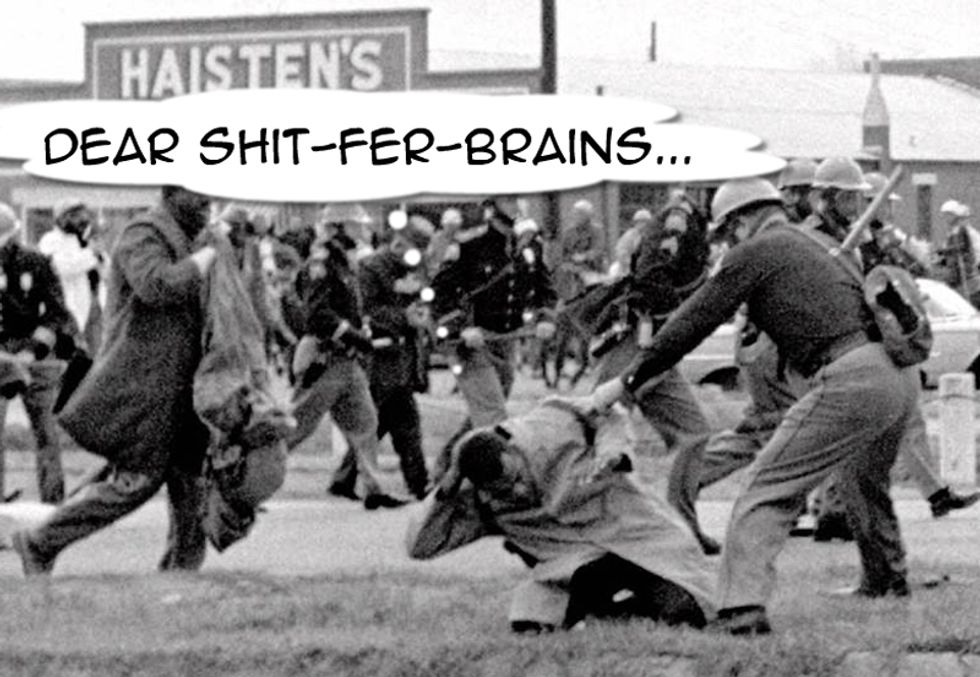 Quite a week for the deleted comments, so we'll put on the ol' neoprene gloves and breathing mask and get right to the Derp Pile. Not surprisingly, we heard from a lot of angry folks who have had it up to here with that terrible racist John Lewis, who betrayed America by suggesting there was something less than legitimate about a presidential election where one campaign was getting a little help from a foreign country's spy operations. Needless to say, the real threat to American Democracy is John Lewis, for suggesting that Donald Trump's election was anything other than perfectly normal, just like every other election where oppo research was outsourced to the FSB. One "Dave Stallman" called us out on grounds of pure logic: How does Lewis's past as a civil rights hero give him any credibility now?

Donald Trump tweeted out a tantrum after John Lewis called said he was not legitimate.

"Dave Stallman" was also very angry that people on Wonkette hide behind screen names, which makes their opinions completely invalid.

Now, we will admit there could be a grain of truth to the idea that simply because someone is famous for something, it doesn't render them immune to criticism, especially when they're talking about something unrelated to what they're famous for -- like perhaps a real estate developer pronouncing himself an expert on international terrorism who knows more than generals do. But John Lewis's fame comes from his fight for the right to participate in free and fair elections. And if anyone knows about the multiple ways in which democracy can be manipulated before a single vote has been cast, it's John Lewis. The marching with MLK part is certainly an extra badge of honor.

Not that Lewis is necessarily a civil rights hero at all, or even if he is, it was a long time ago, and so what? "Wile E. Coli" (we really hate having to admit an otherwise complete lunkhead has a pretty good username) happens to know John Lewis is no hero at all, because for one thing, he criticized Donald Trump, and for another thing, what has Lewis ever done besides betting beaten and tear gassed that one time, huh?

Pfft, so he got a skull fracture in one march, so what? It got better, and it's the only thing "Wile E. Coli" knows about John Lewis, so therefore Lewis has no other history. It's not like he had a decades-long involvement in creating and leading the SNCC [thanks to alert Wonkette Operative "Bob Mahnken" for the correction! I shouldn't try to remember things on my own -- Dok] and working for voting rights as well. Apparently this guy thinks Lewis suddenly came to fame simply because he was injured in the Selma march, like some guy who once caught a home-run ball and has been bragging about it ever since. We might see what a useless old jerk John Lewis is, if we weren't such racists. Also, we need term limits for corrupt politicians, all examples of whom happen to be black.

"Comrade Alva" had a lot of thoughts about Lewis, as well as about other important issues, like how commenters using Disqus's "block" function proves that liberals don't respect the First Amendment. "Comrade Alva" is one of those folks whose comment history is a catalog of catchphrases -- "Fake news," "dishonest press," "blacks breaking free of the liberal plantation," "violent libs," and so on. On the John Lewis post, "Comrade Alva" brought us a lot of similar one-liners, plus some copy-pasted text from a weirdass rightwing blog -- maybe theirs, maybe someone else's, but it sure was timely, since the stuff they copied was from a full year ago:

Stupid racist pieces of shit, like Georgia Democratic Rep. John Lewis, will continue to push the idea that all criticism of Obama is because of his race (half of it at least), instead of Obama’s horrible decisions – his laughable weakness that has allowed the world to burn down around him – the Obama administration’s corruption and total disregard for the laws of our nation – Obama’s continued support of terrorists – and Obama’s many covert attempts to destroy America from the inside.

Rep. John Lewis is a worthless fat libtard jackass who has no clue about reality, and will say anything to try and protect the reputation of their Socialist/Muslim savior, Obama.

The truth is that most criticism of Obama has nothing to do with his race, and has everything to do with how shitty of a so-called “leader” he has been, who will be remembered as “Obama – America’s Weak Terrorist In Chief” & also as the “Worst President in History” – both of which are 100% true.

Fatass loser John Lewis needs to wake up, put down the donuts or snack cakes, and try to get back to reality.

Timely AND witty! Also, just to make sure they hit every possible rightwing cliché, "Comrade Alva" reminds us that almost everyone in the Civil Rights movement was a Republican, but now John Lewis hates civil rights because he wants background checks on firearms sales:

We even heard from someone who created a one-off Disqus account with the username "John Lewis," to make the point that racism is over and The Blacks are the real bigots:

You do sort of have to wonder what's going on in the head of someone who's so insistent that racism is over, but can't seem to stop insisting The Blacks are lazy shiftless apes. Sorry. Lazy shiftless racist apes.

Hey, White Ladies! 4Chan Wants To Meme Some Babies Into Your Womb!

They are calling this Operation B.A.B.B.Y.!

Our post on the geniuses who want to increase the white birthrate through the magic of internet memes, thus staving off White Genocide, got the usual bunch of racist trolls, including one guy calling himself "Spanish PePe," who offered some links to actual science papers to prove that the Jews want to manipulate Our Genes to control the world! (The papers were about possible links between genetics and behavior, and they were authored by Jews, QED):

Jewish propaganda is strong on (((you))) [...] but the problem is -- be prepared for your redpill -- society is a racial construct, jews know this, and if you are not genetically from the chosen race they think you don't deserve to be among them. Dont trust me? Just see some biomolecular studies, and see (((WHO))) are studying which genes determines what behavior within a society.

ProTip: not the nazis, but the jews.

Egad! Jews wrote a couple papers on genes and behavior! How blind can you be to the conspiracy? There's your RED PILL MOMENT! Of course, for both papers, our intrepid researcher left out any non-Jewish-sounding co-authors' names; like " Soo Hong Chew" and "Songfa Zhong" on the first one. Seems like a rhetorical misstep, since "Spanish PePe" could have explained that means the Chinese are in on it too.

A bunch of the other comments on the Moar White Babbies Thru Memes piece came from losers who flock at a neo-Nazi website that thinks it's the height of pro-white activism to spam comments sections, so we'll present only a few sample comments without usernames, lest the authors think they've won by bringing their devastating truth to us:

You really have to admire someone who thinks quoting the all-important "14 words" is an impressive argument.

And finally, there was "czarangelus," who explained the science of why white women shouldn't be allowed to breed outside their race, duh:

See? SCIENCE! And in fact, the utter unworthiness of women to make their own decisions about whom to mate with is proven beyond a doubt by "czarangelus's" own personal experience. He has given this a lot of deep science thinking!

I was in a relationship for 15 years that I intended to carry on for life. But because society revolves around the wants of women rather than the needs of stable social units, she saw fit to pack up stakes and leave, knowing that there's always another dick she can throw herself on without any fear of being called out for her selfishness. For a time, anyway. When she's 50 and no longer attractive and the only thing that cares to keep her company are 17 cats, that's when the regret sets in. It's not "justice," but it's the closest thing we'll ever get.

Some bitch failed to recognize how important she was to preserving the social order, so she left him, and that's why white women need to be kept in line, to preserve the superior genetic and cultural heritage of guys like "czarangelus."

God, don't you morons know the first thing about science?