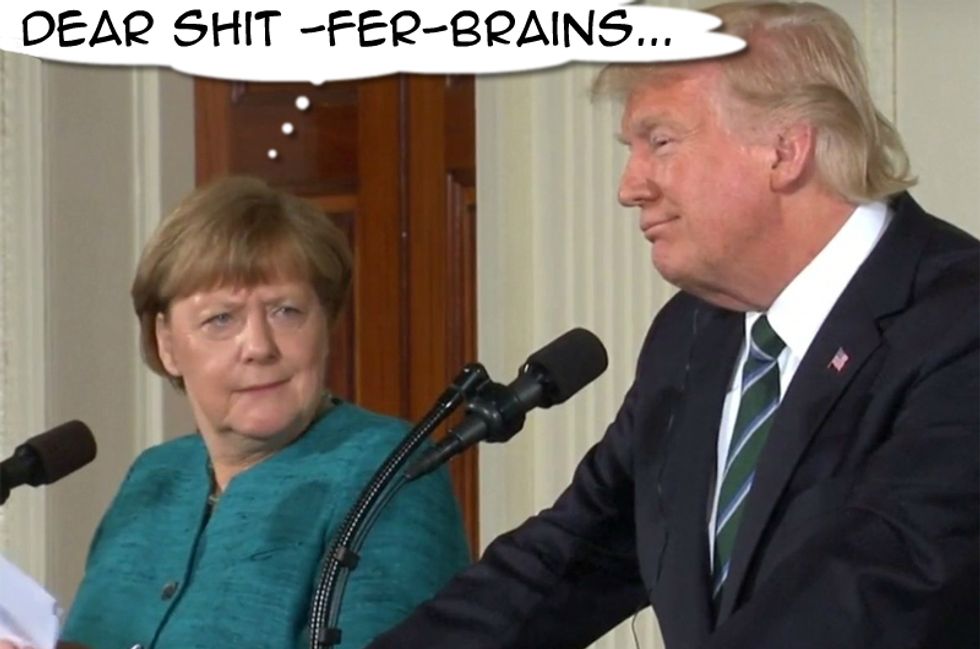 And you may ask yourself, 'Well, how did he get here?'

Happy Sunday, Wonkers, and welcome to yet another edition of Dear ShitFerBrains, bringing you all the Derp that's fit to Herp. This week, we got a WHOLE LOT of righteous anger from one "Paul S. The Christian View," who didn't care ONE WHIT -- or one white -- for our Top Ten last week, because it had "Angela Merkel" in the headline. "Paul" kept insisting he was a "well known established author on Christianity," although the bulk of his scholarly work appears to have been published as letters to the editor of the Quad Cities Dispatch-Argus, serving Moline, East Moline, Rock Island, and Rock Island County in Illinois. Shut up, he IS TOO well-known! At least to people who step aside and tell their children not to talk to the strange man muttering to himself about the Muslims and the Gays all the time. So what did this well known established author on Christianity want to bring to our attention?

Merkel and her clan are of the same spirit as Nazis. Freedom loving German's have not provoked the violence and evil from Muslims. Islamic agenda is the genocide/democide (government sponsored murder) of everyone not Muslim, mainly our superior white race.

Radical Islam rules the agenda and they are bent on doing evil. Obama is a Muslim so naturally he has a satanic world view that chases after Islam.

"Paul" helpfully included a link to one of his publications, a June 2016 letter to the editor explaining that Muslim refugees are fixing to unleash a wave of terrorism on U.S. soil, just like the Orlando nightclub massacre -- which was perpetrated by a guy born in the USA. "Paul" even blamed "plutocrats such as George Soros and the Koch brothers" for paying off politicians to let Muslim immigrants come here to kill us, so that's a kind of bipartisanship.

Also, shame on Merkel for being a Nazi instead of supporting the superior white race.

"Paul" had a lot of thoughts on a great many things! He's one of those paulymaths!

There's just so much brilliance there it's hard to comprehend with our stunted leftist brain. For starters, we need to update our C.V., since we weren't aware letters to the editor could be included among one's scholarly works. It's really great to learn things from a well-known scholarly author who is definitely not crazy, and has been corresponding with 23 Nobel Laureates in the last 21 years on the topic of how global warming is fake. If you want to get really nitpicky about it, we're not entirely sure that sending angry rants to a Nobel laureate and never getting a reply really counts as "correspondence."

At some point while he was visiting last week, "Paul" had his comment history set to "public," and someone noticed he had posted an impassioned condemnation of "Pizzagate," because of course he did, on a completely unrelated story over at Media Matters. In that comment, "Paul" told another commenter at MM,

Unless you denounced the sick practice of "spirit cooking" children in a basement of a DC pizzeria by the Clinton cartels, I can't believe a word you say. Least of all about Christianity, for which I'm a known author with many scholarly works published.

This "stalking" didn't sit well with "Paul," who nonetheless went on to condemn our Wonker for mocking him, and indeed all of us here at Wonkette for turning a blind eye to all the children being spirit cooked in the basement of Comet Ping Pong pizza (which has no basement):

Only the evils like you would support the "spirit cooking " of innocent children. I'm pretty sure this godless site, along with facebook & many other, is controlled by the globalists MSM.

The Godless Facebook a subsidiary of the global elites and their army of Muslims has banned me for sharing a video that was critical to Islam that they didn't want people to know about. The title is "With Open Gates".

We learn so much at this job! According to a nice debunking by Vice's Philip Kleinfeld, "With Open Gates" is a 20-minute "mishmash of comically fake and out-of-context footage, bad subtitling and Islamophobic propaganda" from 2015, aimed at scaring people about the dangerous hordes of scary Muslims bent on flooding Europe with their unclean diseased nastiness. Kleinfeld notes that much of the footage has nothing to do with the ongoing Syrian refugee crisis, but was rather "a collection of random footage of people that aren't white in circumstances that aren't stated," with a scary soundtrack and a Very Serious Narrator portending doom for White Europe. Big surprise: The video explains the Jews are really behind bringing the Muslim hordes to Europe. (Gluttons for punishment can find it -- where else? -- at Breitbart.)

Still, we suppose we should credit our "Bible believing Southern Baptist with a degree in Political Science from Western Kentucky U." (and a fine representative of the superior white race) for one thing at least: He's got a real gift for prophecy, accurately predicting,

I'm sure I'll be blocked on this site soon enough.

have a good day, antiChrist hater

And lo, it did indeed come to pass. We simply couldn't handle all the truth he was laying down, because we are degenerate leftists. Now, Mr. Soros, can we have our money for helping to advance white genocide? Being a race traitor doesn't pay nearly as much as we'd hoped. Also, our usual warning: even though "Paul" is fairly easy to identify from his signed letters to the editor of the Dispatch-Argus, we will not tolerate any doxxing or attempts to bother him from our commenters. Don't harry the loons, OK?

Abortion Lover Tomi Lahren Half-Fired By Glenn Beck, For Loving Abortion Too Much

Does this mean they are snowflakes now???

Our piece on the semi-firing of Tomi Lahren from Glenn Beck's pretend cable-TV network wasn't appreciated one bit by William D., who had some harsh words for Robyn regarding her crimes against good writing. In reply to a Wonker who asked, regarding Lahren, "Should I make the obvious dumb blonde joke?" ol' "William" had a real knee-slapper about Robyn: "If you do..It must be about the idiot who wrote this article!!!!" Robyn's article was accompanied by her staff photo, which clearly shows she has very dark hair, so we're not sure whether "William" thought the blonde lady in the article photo was Robyn, or if he doesn't know what "blonde" means, or if he just knows the author is an idiot liberal, and therefore very, very stupid.

"William" had a whole lot more to say on the topic of how liberals are not only stupid, but murderous, because liberal=socialist=Nazi=communist and also liberals did all the wars!

When some stupid, stupid liberal suggested that someone with all the amazing education "William" has might actually know something about spelling and punctuation, he was delighted to have GOTCHA!'d them, because only stupid people nitpick about such things. "William" is about IDEAS, as you can tell from his explanation that liberals started both World Wars (sadly, we didn't keep him around to explain what exactly was liberal about the Ottoman Empire, Kaiser Wilhelm, or the other powers that jumped into the first one, or Imperial Japan in the second, but you know the Nazis were totally socialists, 'cause it was in the name). So, no, William is unimpressed by your mere griping about stupid spelling and punctuation:

If that's all you have shut up too. I don't give a crap about punctuation...It's the ideas and yours suck!! I purposely right it like I don't emphasize things so again I could give a fuck what you think. My thoughts you can't touch because you are a murderer too. You are a low life that should be in jail the same as anyone who shoots someone. Abortion is MURDER and anyone who helps promotes it or agrees with it is a murderer and will one day be accountable!!!!!!!!!!!!!!!! And the left who love darkness and hate will soon get their recompense!

Guess he's got us hate-filled murderers all figured out -- and truly, America will be a much nicer place when bad people like us are imprisoned for having the wrong politics. If only we weren't such stupid murdering liberals, we might be capable of comprehending our intellectual betters like "William." He's an idea man. Incoherent, illogical ideas expressed inarticulately, but please, focus only on his ideas, OK?

Just to show us how dedicated he is to facts and logic, "William" left us with this parting thought:

Hey Dick breadth...What I told you is true.... Your problem as a know nothing liberal, you don't let the truth and facts get in your way!!!! Pieces of shit leftist like you are like East and West to the truth!!! And there is a real truth...Not yours or mine... Truth!!! Fuckhead. Take the cock outa your mouth and stop mumbling!!!!!! Obtw. Trump won... Trump won..Trump won....Trump won.... Trump won..

Alas, it is true! Trump won, and now we are simply crushed! Surely we must all rend our garments and wail forever now that he's doing such a great job of rescuing America from our clutches and dismantling all our cherished lies! Also, with a line like "Hey Dick breadth," we aren't sure whether we should have banhammered "William" or offered him a chance to freelance for Wonkette.

Programming note: Yr Dok Zoom is finally taking a week off, so no Dear Shitferbrains next week. Yes, we know, we had a lovely bout of flu just a month ago, and now we want more time off? See what madness socialism is?

Yr Wonkette is now ad-free! However, since we waste most of our George Soros money on abortions and undermining democracy, we still need generous donations from our readers to help us keep the Prius's tank full of stolen Christian babies, or whatever it runs on. Thank you for your help, comrades!