Deleted Comments: The Canadian SCOTUS Will Surely Hear Of This Outrage! 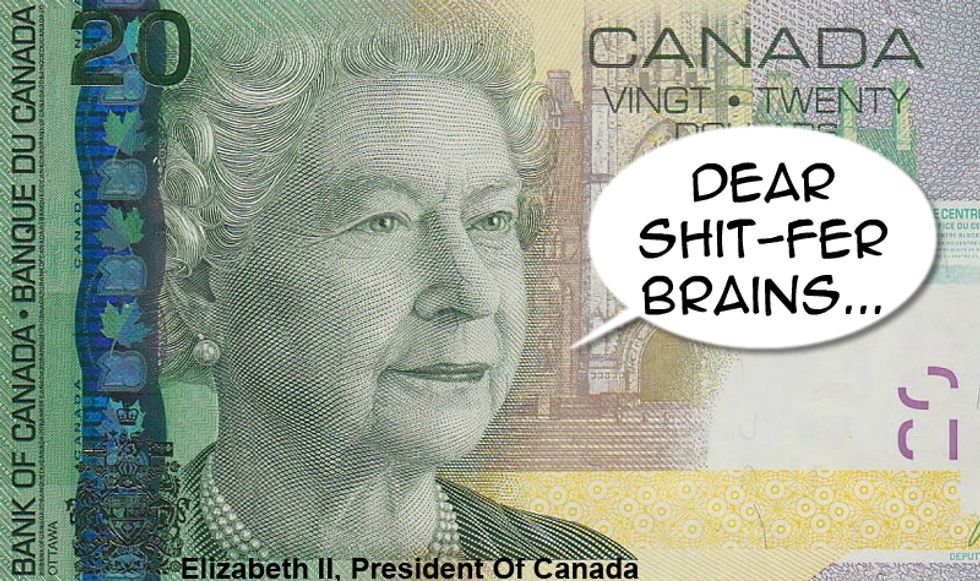 We'll get to Yr deleted comments right soon, but first, let's take a look at what can happen when a Wonkette joke sloshes out into the great big world and runs into a Twitter reader who notices Yr Wonkette is Wrong on the Internet, and can't wait to call us on it. We knew it was coming when we used the brilliant headline Yr Editrix suggested for our story about a Canadian Supreme Court decision allowing two bilked investors to collect a whole bunch of money in damages from Donald Trump and the local developers of Toronto's Trump International Hotel and Tower. In fact, the whole piece was almost an excuse to use the hed "Canadian SCOTUS Agrees: Donald Trump Is A Big Lying Crook."

Yes we know what 'SCOTUS' is an acronym for. Please do not send angry emails.

We knew it was going to result in some grumpypants replies on Twitter and Facebook from the same folks who patiently explain to us that "moran" should be spelled with two o's or that the proper article for "idiot" is an, not a. We tried to at least head that off a little with the "article excerpt" that shows up on social media and our homepage, like thus and so:

As this screenshot from the Sekrit Chat Cave indicates, we knew from experience what was on the way:

So it was certainly no surprise when a Twitter person whom we'll allow to go by only their first name took the predictable umbrage:

We were, of course, all very happy to see this, because it meant America's internet correction brigade was at work. I decided maybe we ought to try to head off further trouble by sending out a little note to avoid further confusion:

As you'll see, this only made matters worse.

Yr Editrix, not one to suffer fools gladly, pointed out that we were actually quite aware Canada does not have a SCOTUS:

Normally, this would be where the story ought to end, as "Andrew" would say, "Oh, OK, so that was a joke. Not very funny, but whatever." But no. You see, "Andrew" had also seen my tweet that followed (but didn't directly reply to) his, so he just knew we were trying to COVER UP our VERY EMBARRASSING MISTAKE by CLAIMING IT WAS A JOKE:

Yr Editrix was beginning to find it all a little dopey. Why on earth would we bother covering up something like that? Besides, it was right there in the excerpt, as she said:

"Andrew," however, was an internet detective who knows what's what, and he wasn't about to let some jerk editor tell him he was wrong, and besides, he had HARD EVIDENCE of the cover-up: A full 28 minutes between his tweet pointing out our error and our lame attempt to pass it off as a "joke"!!!1!

We checked. The "bunch of trolls" giving "Andrew" shit up to this point was Rebecca. (I think I posted and immediately deleted a message saying it was a joke, but I don't recall what I said... guess that could have contributed to his sense of being beset by trolls). Still, Rebecca is vast, she contains multitudes. Of trolls. Trolls who know how to reply with screenshots, too. This may look familiar:

"Andrew" wasn't having any of it, because apart from proving it was a joke from the start, how the hell was he supposed to know it was a joke if we'd been talking about it in a private Slack channel, and what the hell is even wrong with us?

I decided to help out by pointing out the same excerpt was also on our homepage, which Andrew indignantly said he hadn't seen, since he only looked at the article itself. Things continued in this vein, with another Wonkette fan hopping in as well to point out that "Andrew," who lists "comedy nerd" as one of his interests in his Twitter profile, seemed to be having some difficulty with the idea that "Canadian SCOTUS" could be a joke. Meanwhile, in the Chatcave, Rebecca was fulminating about humorless Canadians, so I figured I'd make matters worse if at all possible:

In reply to Rebecca's "you keep insisting we're doing a coverup," Andrew denied he'd ever made such an accusation; he just thought it was a dumb joke. Again, screenshots came into play, finally bringing the farce to something of a conclusion:

And that was the end of that little episode, at least for about 45 minutes, until the next scheduled retweet of the Wonkette story:

We should also note that since "Andrew" made a big doofus of himself already, but finally acknowledged missing our note and almost even apologized, he should be left alone. No doxxing or harassing him -- and frankly, we wish we didn't even have to warn you filthy fuckaducks, but yeesh, Internet, you know?

And now, a couple of actual deleted comments, if only so we won't run afoul of truth in labeling regulations like some dirty Canadian baconmonger:

OK Everyone, It's Time To Chill Out About Rachel Maddow RIGHT NOW JESUS CHRIST

Rachel Maddow sure indeedy did get our attention, didn't she?

Some dork who immediately deleted their Disqus account dropped by our post asking everyone to chill out about Rachel Maddow so they could ask us if we realized that, as a rich dude, Donald Trump pays a heck of a lot more income tax than any of us, and shouldn't that make us rethink our hypocritical class warfare, HMMMMMM?

The "racist" comment was from someone pointing out that poor whites in Appalachia who had voted for Trump would be among those screwed hardest by his budget, which was pretty darn racist, since it mentioned white people. Ah, but then the Big Reveal, sometime before the self-deletion:

Good day! My posts below were part of an experiment. I discovered that liberal commenters seem even more clueless than conservative commenters. I just wanted to visit a liberal website and see the kind of discussion I would have. A couple of you had good points but most of you just demonstrated the ignorant name-calling and baseless accusations I expected. I tried to answer as many as I could but it was hopeless....too much stupidity to deal with. This is my only visit here. I had a good time. I will come back after lunch (maybe) and read some of your replies to have a good laugh with and I will sign off....Sitting back laughing.

Oh my! Well, our self-deleted guest certainly got the last laugh on US with that clever experiment, sneakily infiltrating our completely public website and proving us to be fools who only repeat empty talking points in reply to well-reasoned thoughts like "read the federal budget," "Do you have a real job, or are you a taker?" and "name calling means you've already lost!" We do, however, wish our visitor will contact us when they have published the results of their experiment in the International Journal Of Random Thoughts I Had On The Interwebs This One Time.

Some guy named "Brian" had these completely on-topic thoughts in reply to a post from 2010 about Tea Party protesters screaming obscenities and racial epithets at Democratic members of Congress. Hell if we know. The headline had "Devin Nunes" in it, so OBVIOUSLY it was about Barack Obama's "wire tapp" of Donald Trump. "Brian" was pretty mad at us morons for not knowing this, seven years ago:

"Brian's" very brief comment history also includes this, in reply to a Daily Caller piece on Sean Hannity saying Donald Trump is "a little too sensitive at times":

I don't think he is harsh enough. the left are terrorists of the worst kind and everything they stand for seems to be so damaging to the country. hes too nice and centrist for me.

We're pretty sure that's not the kind of "sensitive" Hannity was talking about, but what would a terrorist of the worst kind know about words anyway? "Brian" also had some thoughts on a Bankrate.com piece about whether states with no income tax are really giving their residents a break, or just getting revenue in other, more regressive ways:

Deport every illegals, refugees who don't "comply" suspending all benefits across the board period, force felons in prison to do road work,since we pay 50k a year to support them, make pusssy millennials work low labor jobs by FORCE by taking their grants and food stamps, have a nationwide concealed carry law (crime goes down saves billions) fix OBAMA healthcare law, cut every politician salary by 50%, no more useless wars, occupation in other countries - nation building- foreign aid -crack down on fraud in thenwelfare state and impose a 90% income tax on all entertainers/celebrities (they want it right?) THEN NO KNE NEEDS TO PAY MORE THAN 10% across the board! Oh wait, Trump is doing 80% of this!

So, hey, he eventually ended up getting around to taxes, so that's darn close to being on topic. We have a feeling "Brian" won't be the least bit happy to find himself included in this week's roundup of Derp. Look for his angry reply somewhere in the comments for a 2009 Field And Stream piece on largemouth bass.

Yr Wonkette is now ad-free, even in the farthest reaches of Canada, where it is said that people routinely leave doctors' offices without paying anything. Please help us continue bringing you the finest deletia by clicking the "Donate" doodad below this article!