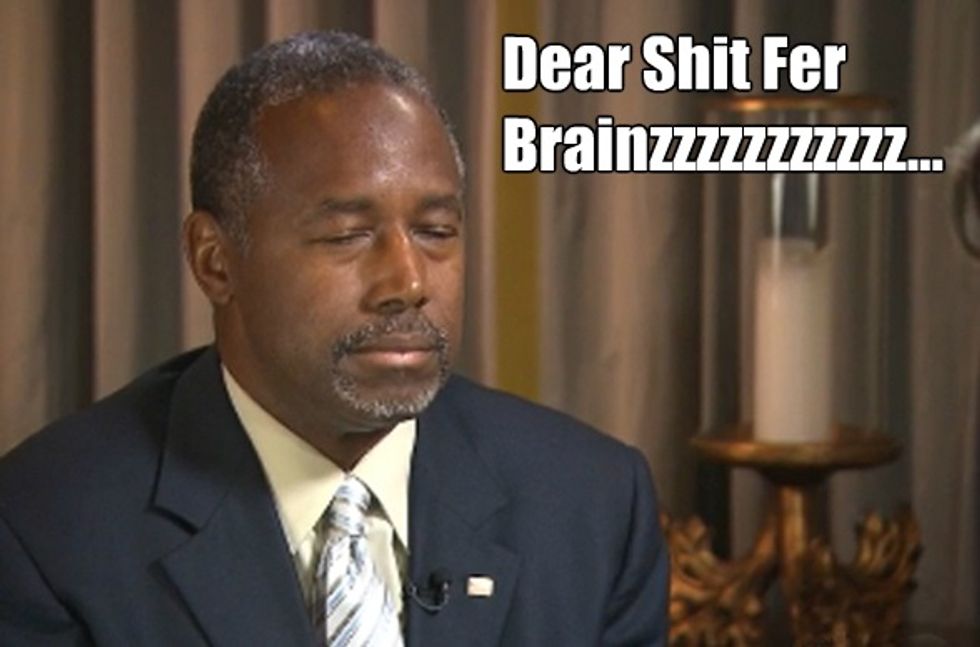 Oh, Auntie Em, I dreamed I was running for president. And you were there, and you...

Last week's Dear ShitFerBrains had so many thoughtful thoughts about Hillary Clinton's Benghazi hearing (yeah, we've forgotten it all already, too) that we didn't have room for some other prime cuts of derp, so we're happy to bring you a fine selection of both the freshest idiocy from the deleted bin as well as a few that have had a chance to season a bit (noseplugs recommended). Let's start with some indignant outrage from "Reagan40," who seems resentful of the 39 previous users who wanted that name, in reply to our piece about Ben Carson's Broken Brain and its "thoughts" on marriage equality. Reagan40 was aghast, agog, and a-flippin' through a thesaurus in reaction to Evan's vile calumnies against Dr. Carson:

You are a very very sick man. I am shocked beyond words at your unrestrained gutter language. What is the point you are trying to make if you have one? That point can be made without such uncouth, churlish, puerile, streetwise, idiotic rantings of a mad man that you are. Everyone has a right to express his opinion. Can you please express opinion and leave it at that? There is no right thinking human being that will take your article seriously. Dr Benjamin Solomon Carson won my vote. Please can I see your cv? I do not think anyone with half a brain will spew out the total BS that came out of your stinking mouth. You are consumed with hatred and hatred does not kill the hated, it destroys the hater!!

"Streetwise?" Evan's going to have to add that to his CV, obviously. Astonished by the foulness of this ugly vile little snark mob, Reagan40 took a look around Wonkette and did not like what he (we assume) saw, not one bit:

I just read through a couple of posts here. My conclusion is that our country is lost to satanists and God will use islam and muslims to teach us lessons that we will never ever recover from. He has started with Obama and another muslim president in the not too distant future will nail the coffin!! You gays and non Muslims will be slaughtered like goats....Sharia will rule and the constitution will be subjugated!!

[contextly_sidebar id="U0gc0KD2cKbIBxtabV2p3SmML7otnhoO"]We should probably note that there was nothing about Islam (or Muslims, either!) in the article that had Reagan40 so very exercised, but once he brought up the topic, he couldn't let it go, especially as other commenters (which we do not allow) pointed out that there was nothing in the piece about Islam. Somewhere in there, he got the idea that all racism began with Muslims, since he knows from WND they invented slavery:

Remember Mohammed claim Allah made black people black because blacks were created to be slaves. I guess Mohammed thought arabs were white!! In case you are black, that cult is not meant for you because I do not understand why any black man should be a Muslim except for brainwashing or ignorance!

Then of course an Actual Muslim Person had to go and engage him, pointing out that Muhammad had written that all people are equal. That brought this witty retort:

Look what you just said is contrary to what obtains in islamic countries. I have seen an arab muslim spat on a Bangladeshi muslim in Saudi arabia. Check it on YouTube. Have you ever seen a Christian white spat on a Christian black?

Oh, sure, he admitted, maybe that happened here way back in the 1950's, but not anymore, anywhere. (OK, maybe on YouYube, regularly). Still, Reagan40 insisted that he's a tolerant guy, at least until Muslims make it impossible for him to be:

You will agree with me that we cannot begin to compare the fruit of islam with that of christianity. There is no need to argue about this. I believe in live and let live. But when it comes to killing people because they are non muslims, it gets to me and I will rather islam be banned from every civilised society.

Glad he cleared that up. In any case, he soon declared himself FINISHED with this Wonkette place:

Please get on with your AIDS infected wasted gay life...good riddance to stinking rubbish!!

We also really upset "David Tønnessen" with our outright lies about Dr. Carson's position on what you should do during a mass shooting, as compared to what Dr. Ben Carson said he did when someone stuck a gun in his ribs at a Popeye's Chicken organization. "David Tønnessen" fact-checked a claim made in our article and was astonished that we just out and out lied about the views of Dr. Ben Carson!

Wow. This is the most messed up site ever. "Ben Carson continues his hilarious winning strategy of telling America that the victims of last week’s massacre were a bunch of pussies, because who in their right mind gets shot? That’s so lame." Painting this honest, calm, rational candidate as a taunting childish moron despite the many calm and logical explanations he gave about his comments in multiple interviews? This is overdoing it. I knew there was bias in this world, but not at this hateful and dishonest level. And what's scarier is that after looking at the comments, people are actually falling for it!

If you actually look at his interviews and watch his speeches without twisting his words and politicizing everything you might not be this dishonest. He defended his comments on the mass shooting multiple times, and not once did he say that they were pussies. Goodness.

[contextly_sidebar id="SlMcw29g83UeEz5c2z0bqmyUrDVy0UuT"]We guess it's time to come clean: Ben Carson never called the Oregon shooting victims pussies. He merely implied very strongly that they were. Thank you for that diligent fact-checking. It's good to know some people are out there who are committed to keeping Yr Wonkette honest.

We also received this brief defense of Dr. Carson from someone with the charming name "disqus_FSfEXu6E9," in reply to our piece on how people with no oil would have handed over Osama bin Laden if only we'd pledged to drill more oil in the USA:

A distinguished Neurosurgeon who has helped improve 15,000 lives throughout his career. An accomplishment that can only evoke envy and fear from a lot of smaller minds because it makes their candidate even smaller.

Oh, you got us, all right. We're just jealous of his intellect.

From "Clive," our piece on Carson's insane notion that the Holocaust resulted from gun control brought this brief thoughtlet:

So, you'd rather just roll over and die? Carson's an idiot but, so is the author of this article.

And on a related topic, our most recent Fun with Guns roundup, in which we invited rational dialogue with gun owners who isagree with the absolutist positions of the NRA, drew fire from "skydivepaul," who didn't bother reading the post and added this comment, which he appears to have copypasted dozens of places. Hey, it's dialogue!

If you are for gun control, then you are not against guns, because guns will be needed to disarm people. So it's not that you are anti-gun. You'll need the police's guns to take away other peoples guns. So you are very pro-gun, you just believe that only the government (which is so reliable, honest, moral and virtuous) should be allowed to have guns. THERE IS NO SUCH THING AS GUN CONTROL. There is only centralizing gun ownership in the hands of a small political elite and their minions.

My right to defend myself with a gun supersedes your ignorance and irrational fear of guns.

Then Paul skydived back to Galt's Gulch.

And finally, speaking of the armed minions of the state, we received a thoughtful analysis of the South Carolina school resource officer who violently flung a student from her desk and threw her across the classroom for being "uncooperative." Reader "R U Following Me?" (no, we don't think anyone could pay us enough) wrote in praise of the deputy:

Actually, He did pretty well......she would not get off of her phone, asked twice to leave, she would not comply when asked to put her hands behind her back, she held on to the desk that's why it went with her, she was punching him...he only grabbed her hands and pulled by clothing....pretty successful moves >> kudos to this officer for controlling the situation. I hope she gets cited someway...surely for assaulting an officer...or did she get arrested? I hope.

[contextly_sidebar id="7hhpW6FAEH6OOGufUN9uxvAEESzX0xsu"]Thanks, mister Law-n-Ordure! Good to know there's always someone around do defend the indefensible, as long as it's being done to black kids. Before their inevitable banhammering, "R U Following Me?" also offered the insight that the phrase "you drank the koolaid" is racist, because Jonestown. That's pretty ridiculous, since everyone knows the Jim Jones cult mixed their cyanide with the off-brand drink powder "Flavor-Aid," so who's the racist now?

By one 'violetmagician,' -- we'd link for credit, but she appears to have vanished from DeviantArt