Deleted Comments: Why Should We Believe Lying Sluts Or The FBI? 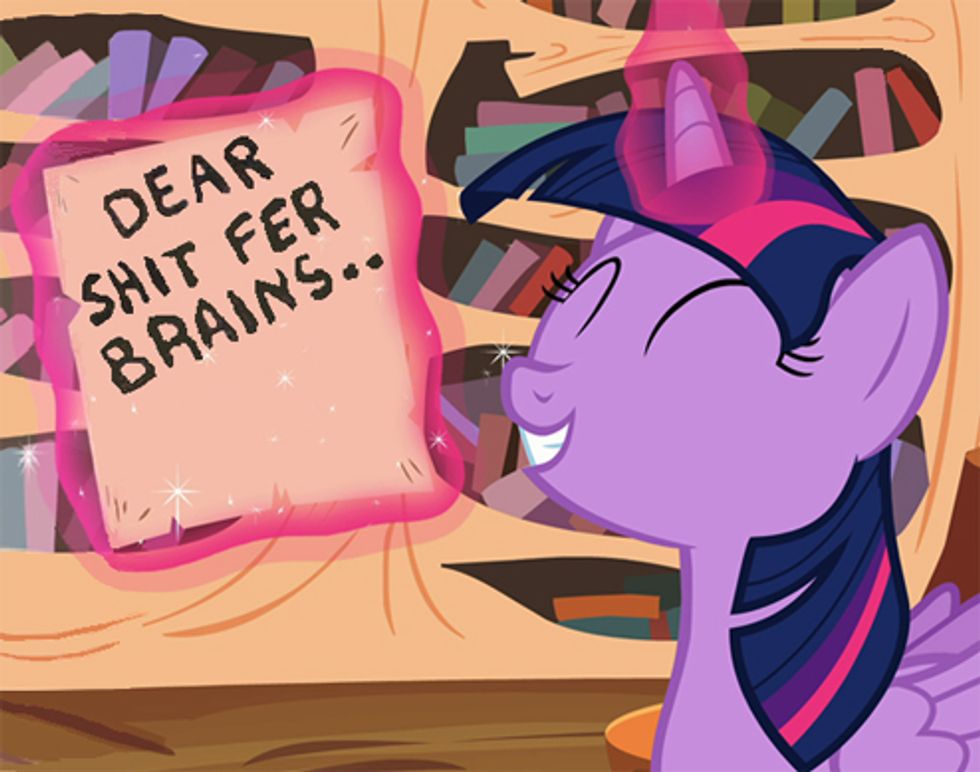 In Twilight We Trust. All others pay Bits

[contextly_sidebar id="PlHOJRm1g5BNzY92BtbayJFx30Q5JsG1"]One "michaelcdickson" was not pleased with our piece on Rand Paul's newfound feminism, which still includes, of course, a demand that the government be small enough to fit in a transvaginal ultrasound wand. He sure caught us in some hypocrisy, all right!

Pretty cool how the author can spout off like a beauty parlor Kama kazzy. When she leaves everyone looks at each other and says "What the hell was that!". To be a true female abuser you've gotta trot out the well worn and tired "women free to control there bodies" refrain. Most any thinking person and all players know this serves the current reality that women need to provide every fantasy of any passing manboy without any consequence for the manboy.

We don't know why anyone would crash a bomb-laden Zero fighter plane into a beauty parlor, but that's not the point: Women getting 'bortions and using birth control aren't really free, since they let themselves be used by men for sex, duh! When someone called out michaelkdickson on this, pointing out that maybe women having control over their own bodies might have some benefits to women themselves, he doubled down, mansplaining that the real victims of contraception and sexual autonomy are The Ladies, because they'll get sex done to them without snagging a husband the way they ought to:

This "sexual freedom" leading to tethered life which is destroyed under the guise of "it's my body", this sexual freedom has allowed menboys to be gratified at the expense of the vast majority of women who usually are played and used as a tool. The beauty of the scam is women are buying that this current reality is as good as they can get. The other irony is that many will scream at me even though I am pointing out that most men are pigs,very pleased to keep using women and want to keep the status quo. Many of you out there are in one of those fast and loose relationships now and KNOW what I'm talking about.

[contextly_sidebar id="ApzrLhO4A4lpm0EdsVOhgQhTnAI8nhih"]We also heard a whole lot -- more than we care to attempt to repeat -- from "Ryan," who had a whole lot of questions about why the mean old FBI shot LaVoy Finicum to death merely because he was reaching for a gun that was found in the inner left-hand pocket of his jacket. Ryan is whatcha call an internet skeptic, who doesn't believe something simply because the FBI says it and because there's video of it, or because people explain it to him. His first essay into the topic suggested that Finicum -- who fled after being pulled over and told to get out of his vehicle, led police on a short chase, swerved around a roadblock, nearly ran over an FBI agent, and reached inside his jacket for a 9-mm pistol that was definitely found in an inner pocket -- just might have been the victim of a misunderstanding or a deliberate assassination:

And so on. Ryan was particularly fixated on why Finicum would have kept his pistol in his left pocket if he were right handed, as apparently he has never seen a jacket with an inner pocket (or a shoulder holster, which in Finicum's case he had not got). Also, Ryan wondered if maybe the FBI agents were yelling at Finicum to empty his pockets, and when he complied, they shot him just to be bastards. And why was the video "deliberately degraded"? As we all know, everything is shot in HD today, especially real-time video from a police aircraft. The main thing is that we shouldn't trust anything the FBI says, even when we can see it ourselves, because they're trying to make their actions look justified, those monsters. Also, Finicum didn't nearly hit an FBI agent on the roadside: the FBI guy deliberately jumped in front of his truck. And why would they use lethal force on a guy they've been told is armed and dangerous (and who spoke repeatedly of not wanting to be taken alive), instead of a beanbag gun?

We've banhammered Ryan, but if you want to see the whole sorry mess, we've left his comments up for amusement value starting here. See if you can beat his logic, sheeple!

[contextly_sidebar id="fZPdoE05jMk4VD0KRNFADY3WqbcyQS7G"]Finally we heard from a hardcore Law-n-Order guy who cheered on Sen. Tom Cotton for blocking a prison-reform bill that would have reduced some sentences for some non-violent drug offenders. After all, if you go and let someone out of jail, ever, you're simply asking for anarchy, according to the aptly named "Concerned":

We might as well let them all out and become like Europe. Nothing is a crime, anything that hurts the feelings is against the law and progressive-ism is in total control. Then anyone can rape your women, take your food, spend your money and live on your land without ever being responsible for their actions. Then you can wait to see when the government tells you to take a shit.

See, that's what happens when any crime more serious than jaywalking doesn't carry the death penalty, as we've seen in Europe. We didn't let him hang around long enough to get his opinions on the Oregon militia crew, but we have a feeling that 'Concerned" probably thinks the Feds were too tough on them. In any case, let this be a lesson to interwebs commenters everywhere: be careful how much bullshit you expel, lest you find yourself on a slippery slope.