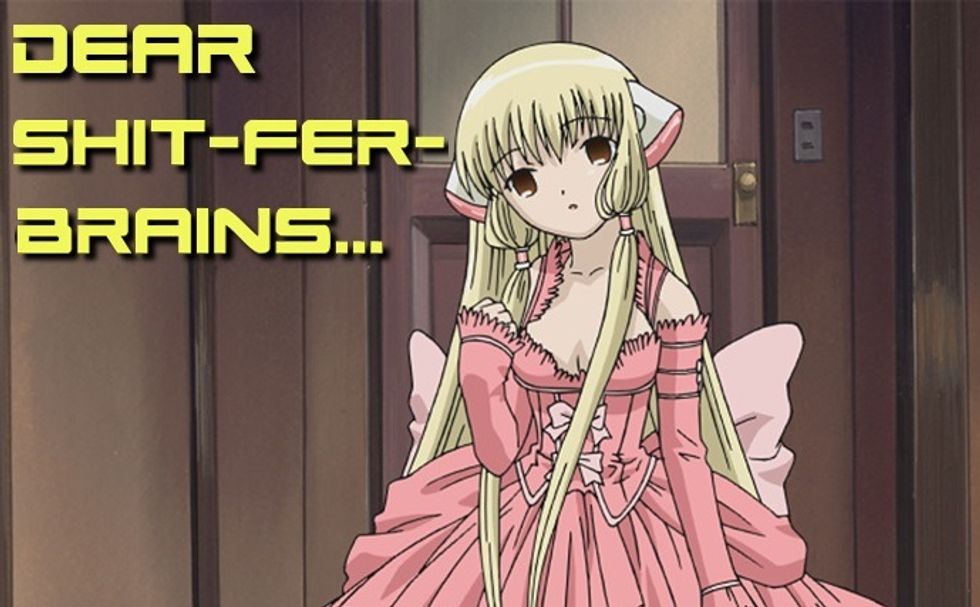 'Chobits' was supposed to be a cautionary tale, not an aspiration...

Our deletia this week ran the gamut from D to D-minus, with a prime example being this brilliant observation from a "OneGalo," a guy who just wanted us all to know why sex robots will replace all the real women, because science:

Women hardly ever invent anything, most men visualize and systematizes which is why sex dolls are just as appealing as real women sometimes even more so, all that is needed is the visual and physical presence, personality is secondary especially in the context of the modern day self delusional women who thinks the world owe them something. Virtual reality, sex robots, better AI, you name it, it will be those house geeks that learned how to program and hack systems in their teens owning and creating sex dolls and virtual reality in the future. Women will make good product managers and social workers as usual and market these male inventions to the customers probably sucking a few dicks in an attempt to climb up the social ladder along the way, while crying about sexual harassment at the work place. Some things will never change.

In which some Men Going Their Own Way have weird things to say about the face of a sex doll.

Guess he's got the right dynamic for the New Frontier. We must confess we're a bit unclear how, even were it true that "women hardly ever invent anything" (have a word with Ada Lovelace, Hedy Lamarr, and Grace Hopper about where your smartphone would be without them), that would mean that sex dolls are as attractive as real ladypeople to men who visualize and systametizes alla time. Forgive our skepticism, but we doubt "OneGalo" has invented anything himself; even his pseudo-scientific explanation of why women lack the cognitive hotstuff to attract great technical minds like his sounds awfully derivative.

Also, too, we should note that his listed email address for Disqus was "cockcarnage@[redacted]" -- again, unclear whether that's because his cock wreaks carnage, or if he shredded it trying to have marital relations with a mannequin stolen from a defunct department store.

That same story also caught the attention of one "Dick Headly" (clever, amirite?), who doesn't like this here "Wonkette" place, not one bit:

Seriously the worst site ever. If wonkette (whatever the fuck that means) wasn't in league with Google nobody would even know they exist. Pointless dribble.

Never mind the unfortunate confusion between dribble and drivel (SAD!), we want to know more about our being "in league with Google." Was there a hostile takeover Rebecca didn't tell us about? How would she even leverage that big a deal? Will I have to start wearing pants?

Deleted Comments: In Which Yr Wonkette Is Invaded By A Troll And Some Clown Dick

Time for a good old-fashioned game of whack-a-troll.

In late-night comments on last week's Deleted Comments post, we received a bizarre series of complaints from "lmur2017," who was very angry about an atrocity we committed: "lmur2017" wanted us to take down a terrible, terrible article in which we made fun of her supposed great-aunt, except she never posted the URL or headline of the offending article:

You are a garbage website and deserve any karma that comes at you. Do you remember making fun of a photo of my 85 yo great-aunt? An everyday American who was featured in a low-income seniors WAPO article. Sadly she passed away with your garbage article still being posted.

You liberals are mentally ill and are so, so, so hypocritical.

Wonkers kept asking for details, and all "lmur2017" would reply was that it was the one with a WaPo photo of her deceased great-aunt, and boy, was she disgusted with the hypocrisy of the left!

LOL, no just don't like HYPOCRITES. Delete the story of a low-income elderly woman's photo that was featured in WAPO and you won't see me again. Horrible. An everyday 85 yo low income senior's photo is made of fun and this site publishes it? GARBAGE. Call me a troll all you want & report me all you want. I'm not stopping until the article is removed.

Would she offer any details? Nope, except to tell us to search the googles for "85 year old washington post wonkette," which didn't turn up anything, either. And how did "lmur2017" come across the offending article, anyway?

I googled to print out a copy of my gr-aunt's obituary and saw the crap article. So yeah-You are GARBAGE just like this site if your condone it.

In reply to readers' request for a link or a headline, all she would reply was that "a two-year old could find it" (which led some not careful readers to assume the article was two years old, but "lmur2017" never said that), or "Wonkette knows. And has their archives handy," and so on. Interspersed among the 50-odd (very odd) comments were some bog-standard insults toward all us terrible liberals, like "do you need a safe space" and "Donald Trump is your president." And many many condemnations of all the monsters here who "mock 85 year old low-income elderly woman" [sic]. Eventually, she told people to "ask dlat" about the article, which helped a little bit: David Lat, who founded and edits the Above The Law blog, did indeed write for Wonkette from January through July of 2006, but that didn't help much, since he never published anything with the hed "Here, mock a Washington Post photo of an 85-year-old low-income woman who is the great-aunt of some wingnut who'll post here in 2017."

But that was at least enough to eventually figure out what the hell "lmur2017" was on about: this piece from February 15, 2006, in which Mr. Lat noted a passing similarity between an elderly woman featured in a WaPo piece and Harry Whittington, the lawyer who Dick Cheney accidentally shot in the face. Lat's piece was simply the headline -- "No, Silly, That’s Not Harry Whittington" -- the picture of the woman, and this:

Note to selves: Drink coffee before scanning the morning headlines…

(The photograph is actually of “[name removed so it won't come up in new searches -- Dok], 85, [who] has lived in Arlington, Va., at a building for low-income seniors since 1990. Michael Williamson/Post.”)

Far from caustic mockery. But, yes, Lat said the woman looked a bit like the lawyer who apologized to Dick Cheney for getting shot in the face by him. But here's the thing: like most articles from Old Wonkette Days, the picture file is missing, lost long ago in one of our server swaps.

So now we're even more mystified, since while it turns out the article exists, there's no way in hell a casual search for the woman's name would bring up that article or Wonkette's long-ago use of the photo, as "lmur2017" claims happened when she was looking for an obituary. The WaPo photo -- which really is lovely -- is the first "image" result, but an image search doesn't bring up the Wonkette story. And in a straight text search on the woman's name, Wonkette's piece doesn't appear in the first dozen pages of results (so much for being in league with Google!).

So either "lmur2017" came across that old Wonkette piece years ago and had been nursing a grudge against us ever since, or... we have no idea. A wingnut who went looking for something to pretend to be angered by? Neither I nor Rebecca had heard from "lmur2017" by email, and in fact, when I replied to her initial post asking her to email me, she then deleted that comment herself. I'm also pretty certain the complaint wasn't from the troll we wrote about in last week's Dear Shitferbrains -- "Trump is your president" doesn't sound like him. Very odd. So should we take down an article from 2006 for being horrible? Since the photo isn't there anymore, I'm inclined to leave it up -- at least this week, since you terrible people will want to see it now. And now we probably will have to delete this very article, since it mentions the photo too, and makes light of a blogging atrocity from 2006 by a writer who surely doesn't remember saying a nice old woman featured in a WaPo article looked a little like someone who was briefly a name in the news.

We didn't think it was possible for Donald Trump to get dumber, but ...

Finally, an actual email from a reader, to Evan, in reply to the daily Wonkette Newsletter featuring Evan's story headlined "OMG Y’all, President Stupidass Actually Thinks He’s #WINNING This Football Fight." Evan said in the Wonkette Sekrit Chat Cave that he'd gotten an email from a newsletter subscriber who "only subscribed so we could make him MAD apparently":

So that's another way to amuse oneself online: subscribe to newsletters you'll hate, then write bitchy replies to the bastards sending them to you.

Yr Wonkette is supported by Reader donations. CLICK HERE so we can offend somebody eleven years down the road!