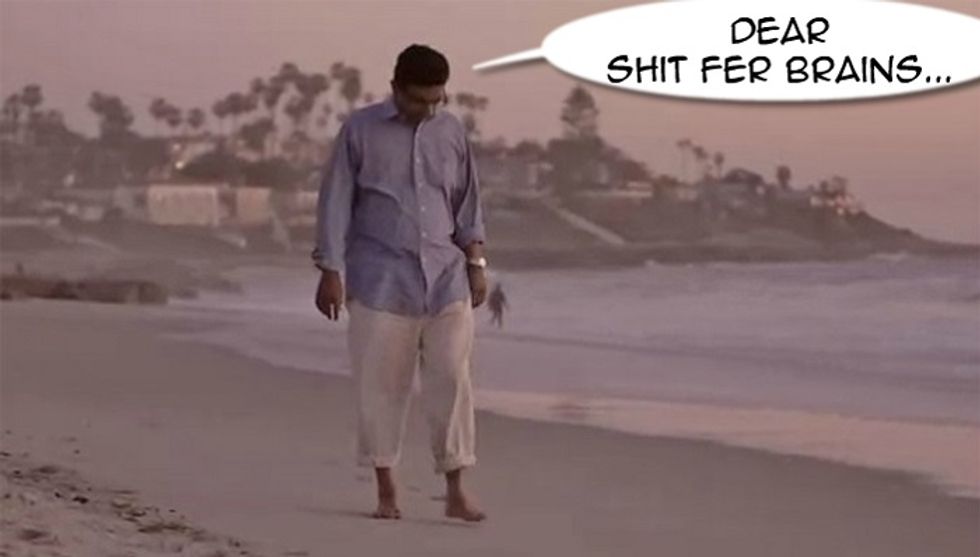 I have heard the derpmaids singing, each to each

Before we jump into this week's Dear ShitFerBrains, a brief programming note: If you were expecting some deleted comments from the Great Wonkette Juanita Broaddrick Foofaraw, we considered it, but decided we'd rather not re-re-litigate those posts any further. Rebecca said what she had to say, and a selection of deleted comments from those posts would only invite more vituperation from people who don't usually read Wonkette. The discussion by Wonkers -- not all of whom agreed with Rebecca -- was gratifyingly civil and thoughtful, and we'd like to leave it there.

It's always gratifying to know the political figures we write about here at Yr Wonkette are aware of us, even when they're not especially pleased by our efforts. For instance, our review of rightwing genius (and convicted felon) Dinesh D'Souza's latest filmic effort, Hillary’s America: The Secret History of the Democratic Party, was noticed by the Great Man himself! We don't think he liked the review, because he sez we r not smrt:

Ah well, you can't please everyone. And yes, our tweeted description of the review has a big stinkin' typo in it, for which we are duly embarrasse.

Strange, though: Even though we asked a couple of times, very nicely, Mr. D'Souza didn't answer our reply to the tweet, which was "Oh, so why DOESN'T your movie mention the Southern Strategy or GOP hero Lee Atwater? Just wondering." We were hoping he might have mentioned those rather significant omissions.

As to the assertion that we couldn't prove the movie was "wrong" about anything, we can only repeat what the original review said: D'Souza does an admirable job of telling half-truths. Andrew Jackson really was a racist and slave owner whose Indian policy amounted to genocide. Southern Democrats like John C. Calhoun really did offer vociferous defenses of slavery, and yes, virtually no Southern Democrats voted for the 13th, 14th, and 15th Amendments. In the 20th Century, Southern Democrats also lynched blacks, fought against civil rights, and fought racial progress. So yep, all those things happened.

But by pretending that nothing in America or the Democratic and Republican parties changed after 1964, D'Souza has made a movie that's about as based in reality as if Steven Spielberg had ended Schindler's List at the point where Oskar Schindler gets a big manufacturing contract from the Nazis and fills his factory with slave laborers from the concentration camps. That would be a completely factual depiction of the life of Oskar Schindler up to the point before he changed, but we doubt anyone would call it "accurate." As we noted in the review, modern Democrats don't deny the party's history -- but they certainly reject the racism of those old dead guys. You're not going to find many modern Democrats with shrines to old-timey Dems like Jefferson Davis, Nathan Bedford Forrest, or George Wallace. We'd also suggest asking neo-Confederates what party they're registered with.

Maybe D'Souza, a devout Christian, would like to imagine a "documentary" about Saul of Tarsus that focused only on the part of his life before he went down that road to Damascus. It could depict in graphic detail Saul's approving presence at the martyrdom of St. Stephen, his raids on the homes and meeting places of Christians, and his imprisonment not only of Christian leaders, but of congregants, both men and women. And then it could end with some snotty comments about how he later claimed to have changed, but just LOOK at how zealously he helped the Romans persecute Christians. As long as everything about his life before he set off toward Damascus was factual, would that be an accurate "secret history" of Saul's life? (And before any outraged Christians claim we're comparing a political party to a saint, no, we're not claiming the Democratic party is equivalent to St. Paul. It's more like Minneapolis.)

D'Souza's tweet, of course, inspired several D'Souza fans to visit the movie review, so as to offer a rebuttal. "Damikes" offered this warning to the readers of Wonkette, who might be fooled by our biased, unfair review:

this was an awesome movie! be very suspect of left wingers who order you not to see it. It will open your eyes to the impending disaster of Hillary's presidency. Go while it's still playing

We watched Dinesh D'Souza's latest movie so you won't have to.

We certainly said it was a bad movie, but we definitely did not order anyone not to see it. In fact, we encouraged people to consider seeing it when it's out on video, since it "might make for some fine comedic viewing on election night." It's almost as if "damikes" hadn't read the review.

"Jacksor Quinten" decided to respond to all our negativity with a far more POSITIVE OUTLOOK...because what Dinesh D'Souza has made is ONE GREAT MOVIE:

BRAVO DINESH.... BRAVO... I just came back from my local theater... who was fortunate enough to be showing this BRILLIANT MASTERPIECE... I can not give it enough stars or thumbs up....he hit the nail on EVERY head here... in the theater is the BEST way to see this in my opinion.... and I will surely be purchasing a blu ray when you release this... I think they should be showing this straight thru to the election.... EVERYONE needs to go see the TRUTH here... I give it my highest recommendation... Incredible workmanship put into this fine fine documentary... God Bless Dinesh and the USA....

So we guess our contention that the movie was like a filmed version of your angry rightwing uncle's emails was completely out of line. You'll be glad to know that there's no shortage of ALL CAPS and "God Bless" in Jacksor Quinten's comment history, too, including a "God Bless Alex Jones..." and this promise to a mosque which called for stronger gun laws after the Orlando massacre:

Of course the mosque wants us to have MORE gun control... it makes it easier for us to become targets to these nuts... sorry... we're NOT giving up our guns... you take our guns... you get our bullets first...period... defend the 2nd Amendment with YOUR LIFE... God Bless the USA...

From "jim NY," which we like to think is pronounced like the name of Pinocchio's cricket pal, we learned that because we gave a bad review to a Dinesh D'Souza joint, we are obviously on welfare, because aren't all liberals on welfare?

Turning angry wingnuts Uncles emails in to a movie! You sound angry, and your movie or blog nobody would show up to!

Why don't you educate yourself on the history of the country you sponge off?

Jim NY also got into an argument from a reader in New York, New York, which is clearly the commie part of the state, not the real American part, just like Sarah Palin said. He was also very disappointed at how poorly educated the commenters on this little mommyblog are. Some samples:

We wish he'd specified whether that stance should have been wider or narrower. We think the Founders -- who didn't say a heck of a lot about property taxes, as we recall, but did give Congress the power to levy taxes in the first place -- might have been disappointed in Jim's punctuation. But what do we know? We're a product of the communist public schools with a room-temperature IQ.

Lita Michelle, who's a very active commenter at fair and balanced site "American Action News," sort of hopes Hillary Clinton wins the election so we filthy libs can reap the whirlwind:

Part of me wants Hillary to win just so when the country goes down in the flames of corruption and you're all on your prayer mats every hour due to the flow of undocumented extremists and favors due for cash paid, (except the homosexuals, they'll be thrown off buildings) I'll be able to say, see, we weren't the enemy and told ya so! You could have had jobs and prosperity but chose losing all your freedoms and serving a crooked dictator. Congratulations - u lost.

Silly Lita -- you won't be able to say any of that from your cell in the FEMA camps! Lita was also very angry at a Wonker who bragged that they'd spent a few minutes in Costco hiding D'Souza's books: That Wonker had bragged of "turning all copies of the reissue of this trash over and covering them with other books. It's my civic duty." Actually, we'd say it was more of a dick move that accomplished nothing more than creating extra bother for some poor Costco drone who had to go and put the books back in their proper place. Seriously childish, and nothing to boast about, because 1) it's just wrong -- we fight ideas we oppose with more ideas, and B) it leads to hyperbolic responses like this from Lita:

Are u a book burner too? It's always the open minded left killing freedom of speech. If someone has a different opinion or wishes to share information you don't like, label it hate speech so they can be shut down. Very short sighted and dangerous. It might be your voice being silenced one day.

While we'd argue that hiding some copies of D'Souza's distorted history is far from "killing free speech" -- it's more like trying to kick free speech in the shin, and missing -- we'd agree it was a Bad Thing, even if it won't have any more apocalyptic results than giving a Costco stocker one more goddamned task to finish before their break. There: Liberal Blogger Stands Up for D'Souza's Free Speech.

What Is Hillary Clinton Dying From Today?

Finally, on an altogether different topic, we'll close with this impressive weirdness -- on the thread about Hillary's imminent death from EVERYTHING -- from someone going by the name "Maximmus," who couldn't even manage a fake gladiator name very well. It was so magnificently over the top that we were genuinely unsure whether it was weapons-grade rightwing stupid, or a brilliant Poe's Law parody thereof. Since "Maximmus" had set their comment history to private, we googled around a bit and found other, slightly less off the rails posts that convinced us this one was sincere, and possibly in need of a court-ordered forehead tattoo reading POOR IMPULSE CONTROL:

YOU are a seriously ill Marxist Liberal blind dumbed down deceived sheeple communist socialistic degenerate to even consider supporting satanic witch hillary. If we had a Revolution now i would kill your antichrist anti american cowardly hide first. After Trump elected do us all a favor and move your communist butt outta the Republic. I guarantee George Washington and Thomas Jefferson would of hung you by the neck until death Tory. You are absolutely one ungodly piece of revolting Marxist Liberal trash. Lenin was right, you are truly a USEFUL IDIOT.

Shortly after we banned "Maximmus," they deleted their account. And yet we have a feeling they're still out there on the web, protecting Liberty and threatening to kill you first. More disturbingly, their vote counts every bit as much as yours.