Deleted Comments: You Can't Be A Liberal And A Christian, Duh 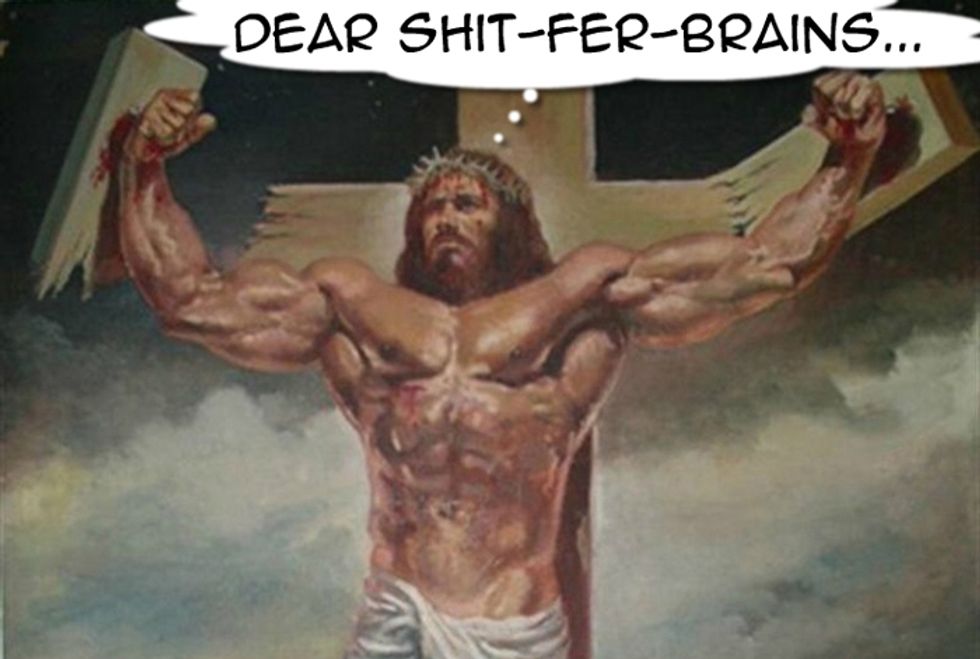 Don't make Muscle Jesus angry. You wouldn't like Him when He's angry.

Once in a while we'll get an influx of angry new commenters who are very, VERY unhappy with something we've published, but we have no idea how they found the piece to be outraged by in the first place. This week, we were deluged with some seriously unhappy people who were seriously upset that we ran a piece about Seattle police and Starbucks coffeehouses partnering to establish a “safe place” program where LGBT people can report hate crimes. Obviously, Starbucks hates Jesus, which prompted a torrent of people to remind us that not only are Christians far more oppressed than The Gays, there is also no such thing as discrimination against gays, although god knows they deserve some.

A very persistent person with the username "Skalamoosh" (who may or may not do the flandango) took us to task for our hatred of Real Christians, which are the conservative kind only:

Well I can tell that this website is highly biased toward bashing Christians. Sure, LBGT's and any human being, should have safe places from physical or emotional violence, though there is zero concern about offending a Christian in today's culture. Disagreeing with homosexuality is not hating. Tolerance is not equal to Support, because all are forced to tolerate, but if you disagree somehow you hate the person??? Makes no sense.

Jesuphobia, Responsibiliphobia, moraliphobia are running rampant up in here. I'm sure this comment will be deleted, because I can tell that anything remotely close to defending Christianity is instantly slashed from this forum.

[contextly_sidebar id="QZmDwTFfBHqA1j4YJbeg877JLoGvaV1y"]We have to give Skalamoosh credit for creativity, with those exciting neologisms! We aren't quite certain how supporting gay rights is an example of hatred or fear toward "responsibility," but it sure sounds like a winning slogan. And look, not only was your comment not deleted, it was actually featured quite prominently. Skalamoosh also needed to put the kibosh on another commenter's mistaken notion that one can somehow be both a Christian and a liberal, because Logic:

Newsflash: You can't be a Liberal and a Christian because liberals promote killing unborn people . . .. . .. .. see how that feels? You obviously don't understand conservatism, and have a skewed sense of what liberal agenda is. Conservatism base is less government, lower taxes, market freedom. Liberalism = big government, telling you how your money should be spent (high tax), reducing your freedom (gun control, making you pay for something you don't believe in like BC, restricting your choice in education of your children)

We had no idea that it was possible to throw that many dots between words. That might be a new record in ellipses. To be fair (which liberals never are, since we hate Christians), it appears that Skalamoosh was picking on a point the other commenter made, claiming that Republicans make lousy Christians since many of them favor unfettered capitalism over helping the poor, so we guess that was more of a tit-for-tat Dueling Generalization than an absolute. We're certain that the question of "What is a real Christian?" will eventually be settled in blog comments, someday. Also, since when are American Christians forced to pay for British Columbia?

Skalamoosh also offered an interesting theory as to why so many rightwingers sound so nutty online: False flag blog comments!

Just as there are leftist extremists, there are crazy people calling themselves so-called Christians. In fact many pose as Christians just to make them look bad on purpose, especially online in forums like this.

[contextly_sidebar id="ZjM6oHcObuzRxDr9FSGnMtiyZrHJ9Kbg"]In addition, we learned that nobody's really offended by Starbucks' insufficiently-Christmassy coffee cups: It's all a spoof to make liberals look silly!

Liberals aren't understanding the deep-seeded joke that conservatives are playing here. The only reason people are pretending to be offended is because we have been given the right to do so by liberals everywhere. This is just to show you what it's like to deal with idiots that get offended by everything that doesn't agree with their opinions.

We received a much more succinct comment on the article from someone posting as "goldberg," who wanted us to know that Gays are Icky:

Gross. Won't be going in there anytime soon if fags and freaks are gonna be there.

Gosh, their business will certainly be missed.

"Plewdawg" warned that Starbucks is almost certainly flirting with disaster, since any day now, Islamic radicals will find the coffee shops a perfect target:

Ah....GUN FREE ZONE and now SAFETY NET FOR LGBT....ISIS said they are coming to spill American Blood and Starbucks just went on their radar.

We received a rather lengthy missive from "Preacher Cruz" -- we're fairly certain it's not really Ted's daddy, but you never know -- who wanted us to know that The Gays have nothing to complain about in America, because the real enemy is, of course, Radical Islam:

that when it does happen that person is NOT following the Bible.

NO need for such “safe places”. Not because NO gays are being mistreated but because ANY person can walk into almost any, business, fire station, police station, library or even..... (shudder) a Church (except Westboro “Baptist”, which BTW is all Democrat and NOT a part of the Baptist convention at all) and tell someone that they need help and they will GET it. No matter your sex, preference, race or whatever.,

No guarantees if a LGBT person tries getting help in a Mosque but, “HEY, we’re vilifying Christians here!”

Evan Hurst has a REAL hate on for all Christians doesn’t he?

Hmmm... We're fairly certain that Evan's criticisms in the piece were directed mostly at NewsBusters blogger Christine Marsh, who he mocked enthusiastically. We looked, and he definitely never said anything about "all Christians," because like all liberal gay Tennessee writers at Wonkette, Evan knows what an overly broad generalization is. After listing several of Evan's supposed slurs of all Christians (each of them mocking Ms. Marsh), Preacher Cruz summed up,

Guess the truth doesn’t matter and kindness, tolerance and inclusion are just nice buzz words to use. What people like Evan REALLY mean is “Agree with everything I want or face the consequences!”

The American Christian is the ONLY Minority group that it is 100% OK to bully, mistreat, abuse and vilify with the language of the other. If they’re WHITE? All the Better!

Darn, that's some oppression of a "minority" -- we said mean things. Such consequences! Fortunately, Preacher Cruz has been kissed gently with the Banhammer of Loving Correction (© and ™ John Scalzi), so they will not have to worry about the consequences of being taunted a second time.

"Hillary" -- not that one -- warned that Starbucks is risking economic doom by offering to be a haven for LGBT people who might need help, and also edumacated us on the complete nonexistence of trans* people. Also, "Hillary" needs to learn how to use a spacebar:

When they start losing business because their stores attract too many freaks you'll see how many shits they have.Females may want to avoid them because they don't want to see some guy, who claims he's a girl, pull his dick out in the ladies room.People like Bruce Jenner(looks like a male with XY chromosomes) are not transsexuals, they are transvestites.A transvestite is a person with a fetish who gets some type of sexual satisfaction by dressing up as a member of the opposite sex.

And here we thought that it had something to do with liking the Rocky Horror Picture Show. "Hillary" also had thoughts on Barack Obama, the secret gay, and those thoughts are not at all plucked straight out of Stormfront's online forums:

Barry is fruity like all negro boys brought up without their daddy around. I heard these coloured boys rapping about blowing domes!

On the vital related question of Starbucks' war on Christmas with their red cups, we heard from "Aubrey Yancey," who would like to lay down some Legal Reasoning on us:

Starbucks cannot destroy Christmas. The world has been trying to do that for Centuries.

As a kid (I am now about a month from 79) I watched the world try to "X" Christ out of it. That failed, so Satan enlisted our Governments to help in the 60s. Well, God is still winning with the US National Motto, "In God We Trust". Congress guaranteed it in 1956 and reaffirmed it in 2002 and again on November 1, 2011. They then encouraged that it be displayed in all public schools and government buildings. It was presented to the courts for repeal by Case law #04-1753 Lambeth-Lea vs. Davidson County, NC Board of Commissioners. It failed all the way to the U.S. Supreme Court, and that court turned it down, causing it to become law. Now, if my logic is correct, and I believe it is, If our Motto is In God We Trust, then we MUST pray to God for our needs. Therefore, prayer is as legal in public school as it is in the Congressional meetings of our United States of America! I didn't say "A moment of silence." I said, "prayer!"

That's pretty good, huh? The Supreme Court upheld the motto "In God we Trust" as an example of ceremonial deism rather than as a violation of the Establishment Clause, so in point of fact, the Establishment Clause is null and void, and we are obliged to ignore the First Amendment and all other Supreme Court decisions about prayer in school. We're looking forward to Aubrey Yancey's disproof of the Theory of Relativity, coming soon. Now get to praying, you heathens.

Finally, for a taste of Good Old-Fashioned Internet Christian Gibberish, we were Charmed by the RANDOM CAPITALIZATION and "QUOTATION MARKS" in this "MISSIVE" from "Kyle Steven":

I do Not go to church , Not in modern terms, I Hold MY Christ IN MY HEART AND IN MY SOUL. You see , I admit freely now to the world , Jesus Christ is MY SAVIOR.

I Worry about MY SOUL , and the souls of my family and friends .

I will NOT WORRY about anyone else's Soul. I have also copied and posted this post along with a link to this article on other sites.

Yes that also means a screen capture of this post , Showing it had been posted here.

Everyone these days are being brainwashed in to Spineless Jellyfish , " You have to be Politically Correct" , SCREW THAT .

DO UNTO OTHERS AS YOU WISH THEM TO DO UNTO YOU. REMEMBER THAT.

And I WILL For those that RESPECT MY MERRY CHRISTMAS , I will tip my hat to what ever it is you hold dear to you , even if it is nothing more then staying asleep or waking up .

You tell me who the person is that has more HATE in their agenda. If you think it is me , Then you are not true to yourself , or anyone else.

We guess Kyle SURE TOLD US!!!!!!!!! What exactly Kyle told us, however, is open to debate. Please discuss amongst yourselves.