Deleted Comments: You Dumb Libs Mocked A Nazi, So Now Segregation's Back Forever 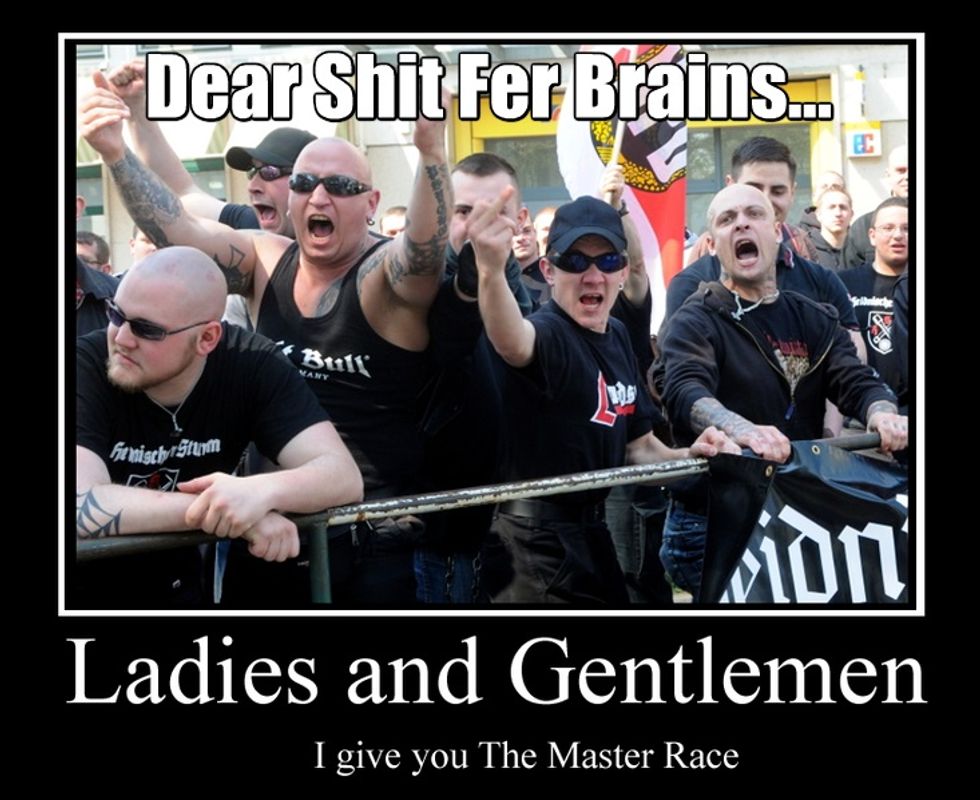 We bet the guy who wrote to us is more of a polo shirt, khakis, and tiki torch type, tho.

Yr Wonkette got a visit from a very smart white nationalist this week, and we are sorry to say we did not engage him in substantial debate, so unfortunately, he wins, and now we have no choice but to accept a return to segregation. Darn. There goes our dream of White Genocide.

Who doesn’t long for the days when public spaces were littered with those beautifully rustic signs declaring NO COLOREDS ALLOWED!

Our very smart visitor, going by the name "Copyright101" -- because get it, we should all copy the far right or something? -- dropped by our story on that South Dakota Republican who accidentally forgot to hide his libertarian stiffy for honest merchants who don't want to do business with black people. In response to the story's headline, "South Dakota Dickhole Sorry He Forgot Segregation Was Bad," our brave Aryan asked the perfectly reasonable question,

Who was segregation bad for?

Oooh, there's a stumper! And then he was off and running, demanding that Wonkers "debate" him and proclaiming that he was winning because no one took him seriously enough to do anything more than tell him to GTFO. Because seriously, that's such a serious question, don't you see. Still, a few people tried -- and failed, miserably, by his standards -- to accept the challenge, like one person who pointed out that, for instance, segregated baseball was actually bad for the game of baseball, because it led to some prime talent being marooned in the Negro Leagues and allowed a fat palooka like Babe Ruth to become a star, since he wasn't truly playing against the very best. Aha! "Copyright101" pounced, so you admit racial differences!

Right, so although baseball emerged from the pastimes of white people they're supposed to hand it over to black people? Since you're happy to imply black racial superiority in the vital field of hitting a ball with a stick and running about are you prepared to concede that white people, as a group, might be good at anything regarded as generally positive?
Good to hear.

When that person came back and said no, the point is that, out of the range of good players of any race, segregated sportsball deliberately excluded some very talented black men, thus protecting all white players from a wider pool of competition, Copywhite 101 wasn't at all impressed by that refusal to buy into his premise. To the Wonker's "No one implied that black people were better at baseball," he replied,

Of course they did! You're now walking it back to a more sensible position about some people.

Cute, isn't it? Denying his take on things is "walking it back." Very clever.

To someone else who argued that segregation was bad for both its victims and for the whites who spent every waking hour trying to enforce it instead of not freaking out that black people could be doctors and lawyers, or even internet trolls, CrappyWhite demanded PROOF of that claim:

Really? How would you demonstrate that in some measurable real world sense? I find the idea of segregated, two tier societies unpleasant. It would be better for everyone to live in more or less homogeneous ethnostates.
Looking at the US it's clear desegation has been an unfolding disaster for whites while it's encouraging entitlement and unhappiness among blacks.

See? Everyone would be happier if there were no race-mixing, because Sloppywhite 101 would be. Oh, dear, but then some VERY RUDE commenter, who clearly has no respect for serious debate, had to go and post a clip from "Mr. Show" about incompetent white supremacists:

Needless to say, that lost debating points, because obviously if there were any real world arguments against Slappy White, we'd make them, but all we have is Jew-controlled television sketch comedy:

How amusing. You've linked to a piece of comic fiction designed to denigrate white people to, somehow, support an argument about the real world. Far too common in the current year. It seems like political thought and commentary has been subcontracted to comedians these days.

Ah, the pain of our fallen political discourse, where white nationalists can't even get a good argument. Instead of such banal fictions, which are not true since white nationalists are actually good and smart, why won't Wonkette take someone seriously when he demands to be taken seriously, huh? Look at his bold logic-based takedown of the sketch comedy show:

Yes, still a work of fiction. Why is that supposed to be more persuasive than, say, differential racial crime rates?
Or I could point out that white people created TV making the above show technically possible. Black people being entirely irrelevant to the process.
(In fact whites invented TV twice over, look it up History101)
And the internet we're using right here - white people made that possible and no one else.
But we're supposed to discount all that because of a short comedy sketch?

Or maybe sketch comedy is more interesting than taking a racist seriously. That hypothesis is definitely worth further study.

But sure -- funny how the exclusion of blacks from higher education as well as the highest positions in military, science and technology fields resulted in white people making TV and the internet. Nothing like slamming the door in people's faces and wondering why they're outside, huh? Oh, but of course -- the doors had to stay closed, to make sure only the best people made it into the business. Also, any exceptions you might care to point out, like Mary Jackson, the NASA computer scientist, are mere imitators of white brilliance, because while she may have gotten Americans to the moon, she didn't build the internet, now did she? Nor did she invent the self-moving goalpost.

And so on; he said a lot more tedious crap, like this stumper:

If a multiethnic state is natural and workable why the need for anti-discrimination laws?

Wow, maybe because whites built a deeply-ingrained racist system that functioned for a few centuries and that some don't want to give up? Naah, where would someone get such a silly idea? When a Wonker pointed out that the only reason anti-discrimination laws are needed is that racial disparities were constructed, and some assholes insist on being racist and keeping us from having nice things, our Aryan superman flounced with this parting shot -- at the Jews, of course, who REALLY run everything:

So all we have to do make a multiracial society work is beat down the attitudes of everyone involved? In fact that's kind of what had happened, except by and large, it's only whites who are subject to the gross social engineering. Each example of real or perceived disparate impact is assessed from every angle and then judged to be the fault of whites.
When we look at other subtler mechanisms being used we can see everyone is being manipulated. The media constantly depict whites as stupid, chaotic, violent, amoral and so on. Blacks particularly are depicted as brave, noble, forbearing, dignified.
The effect is nihilism amongst whites, cringing, apologetic, guilty. And an inflated sense of entitlement and disappointment among blacks. Which is designed to create further conflict.
Because the people running the show want conflict, divide and rule.

One thing we'll give these bozos: they really do have a sense of tradition. That sounds exactly like the very first white supremacist I ever interacted with, a Turner Diaries-reading asshole with whom I worked at a terrible summer job in college. (He also was really into UFOs, just to illustrate the concept of "crank magnetism.") By never having any new ideas, they really are out to preserve their heritage.

Oh, yes, we also had another, more recent visit to that thread from a fellow traveler going by the nym "Orgorg," who offered this astute explanation of How The World Is Naturally Racist And Should Be:

It is always hilarious when a genocidal race-mixer thinks that people are supposed to be media programmed for their own racial-destruction and the past 50 or 60 years of time is how life has always been on this planet for a half billion years. It is natural to segregate and protect your own kind. Black birds fly with the Black birds and Red birds fly with the Red birds. You only think that race-mixing is normal because you are media programed. Mother Nature does not watch tv. Race is simply extended family or tribe. People who watch the media programming are programmed to think that betraying their race is normal and honorable. It is really suicidal instead of normal. Tremendous amounts of effort is required to twist and propagandize people into a direction that is unnatural. If the media goes down for a while, people will revert to their natural tribal way of thinking.

Gosh, we want to respond to that by pointing and laughing at what a childish -- and myopic -- view it is, which simply proves how completely we've been brainwashed. Guess it's time to let that loser have an ethnostate, too.

Or we could just go take a walk. It's too nice a day to waste it on morons.

Yr Wonkette is supported by reader donations. Please click here to help us attract a better class of troll. These guys are weak, sad poop.