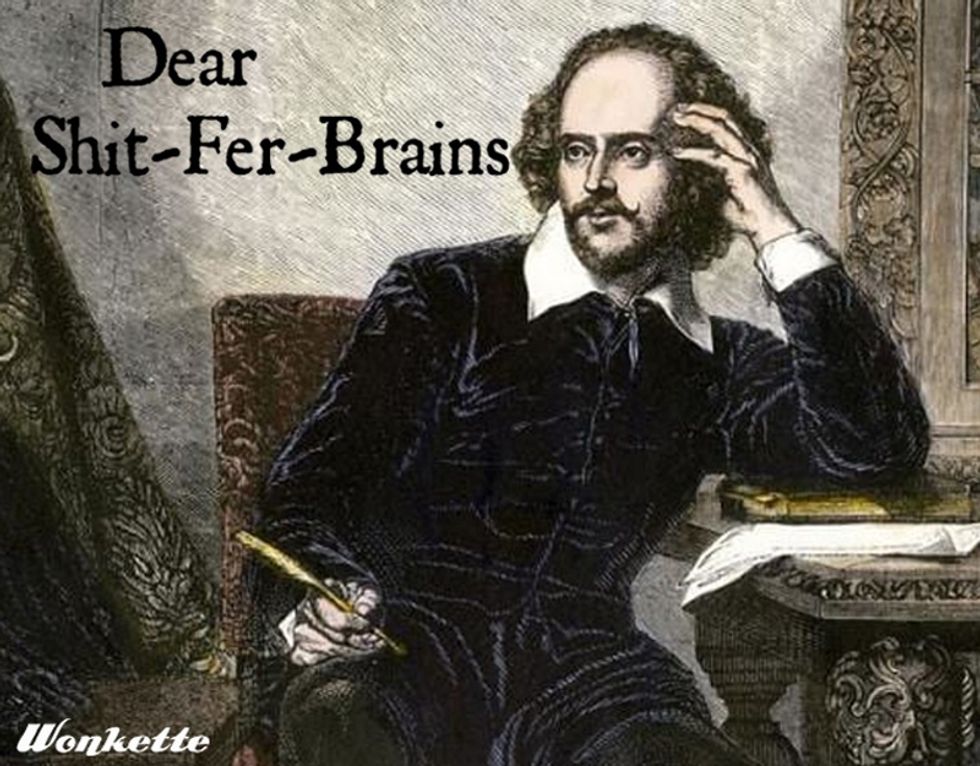 Thou hast in thy skull no more brain than I have in mine elbows.

Hey-ho, Wonkers, so much pure Stupid has been piling up in the ol' Dear ShitFerBrains bin that we'll probably get multiple posts out of the past couple weeks' derp. Let's get right to a true scholar who is morally and intellectually superior to all of us, one "AugustineThomas," who gave us a good dressing down for our many failings. His Jeremiad was sparked by our post on the Trump Inauguration's trouble finding entertainers, except for the Rockettes (and even some of those high-kicking dancers aren't crazy about the gig). This news was quite welcome to "AugustineThomas," who was happy the Inauguration would be untainted by purveyors of filth:

This is good for America. We don't need Obama's pop culture perverts to pervert our children and playing at the inauguration gives them exposure.

Trump Demands Dancing Girls Be Washed, Brought To Him

They have to perform, but will likely be imagining kicking him in the face while doing so.

Oh, but “AugustineThomas” was only getting started about all the depravity and nastiness we secular leftist perverts are responsible for. A sampling:

We get the impression "AugustineThomas" cares little for secularism, perverts, porn, or popular culture. All of which are apparently Barack Obama's fault; at least Obama is the current embodiment of how degraded culture has become, him with his White House concerts featuring the Rap and the Pop music (and great Blues and classical performers, too, but those are just for show, because as everyone knows, Obama is a pervert secularist leftist who worships pervert leftist secularists, pervertedly). Plus, A.T. achieved a degree from one of the top-ranked English departments in the world, where somehow no professor ever explained to him what it meant when something in one of his papers was circled and marked "repetitious." Sadly, he never mentioned which top-notch English program he graduated from, so we won't be able to send them a stern letter pointing out they aren't teaching students to avoid over-generalizing.

Speaking of which, A.T. had some pretty harsh words for us secular perverts and our clear lack of education, and he dared us to prove we actually knew anything about REAL culture, which we can't prove anyway, since obviously if we answered, we'd have only looked it up using the Googlebox:

We'll confess, after we banhammered poor "AugustineThomas," rendering him an unperson, we pointed out we've always been puzzled by rightwingers who lionize Orwell and assume he'd be their best bud, when he was a lifelong socialist whose two best-known novels satirize the Soviet system not because Orwell loved American free enterprise, but because he thought the USSR had perverted democratic socialism. Given Orwell's staunch anti-clericalism, if not outright atheism, it strikes us as weird A.T. would embrace him at all.

As to his claim, repeated several times, that regular churchgoers are more educated than "secularists," A.T. finally offered a source after several people challenged him. You guys won't believe this, but our graduate of one of the top-ranked English departments in the world mischaracterized the study. Shocking, we know:

Why do you Secularists always demand citations, yet never provide any? You are intellectually PATHETIC people.

The link does indeed go to a Pew Research Center report. It's about religious affiliation and education worldwide, not just religious affiliation and education in the United States, which makes a bit of a difference, we'd say. Particularly if one is claiming readers of an American political mommyblog are uneducated drooling morons. And here's a fun "tell": The Pew report does not have the headline "Pew Report: Jews and Christians More Educated Than Atheists and Muslims." You may be very shocked to learn a Breitbart article about the report does, which suggests A.T. read the Breitbart piece and nothing more.

Shockingly, the Pew study (which is a good read, actually) isn't saying Christians are inherently smarter or more likely to be educated; rather, it says educational attainments of various religious groups are tied to economic development: Jews have the highest level of average postsecondary education because "the vast majority of the world’s Jews live in the United States and Israel -- two economically developed countries with high levels of education overall." As for "atheists and Muslims" being less educated worldwide, the study doesn't say much about actual belief in a deity...but yes, post-Mao China has a lot of uneducated poor people with no religious affiliation. By golly, it's almost as if "AugustineThomas" were seriously misrepresenting the actual findings of the study!

As for correlations between religion and education in the U.S. of A., it's worthwhile to look at the New York Times' reporting on that Pew study. Turns out American results are different from worldwide averages:

There were 267 million Christians in the United States when the data was collected, but only 36 percent of them had a postsecondary education, including college or a vocational school, the researchers said. That made them the least-educated religious group in the country.

Jews in the United States were more than twice as likely as Christians to have a postsecondary degree, and Hindus were almost three times as likely, Pew said. Buddhists, Muslims and those who said they were religiously unaffiliated were also more likely to have a college degree than those who identified themselves as Christians.

Now, before you make the same mistake as A.T. and crow, "See? Christians are dummm!" it's worth noting that, in the U.S., the data for religious minorities are skewed by immigration policies, according to Pew lead researcher Conrad Hackett, who noted that while American Christians are among the best-educated Christians worldwide, our immigration policies favor highly skilled, highly educated immigrants, which is why Muslims and Hindus in the U.S. are likelier to have more advanced degrees than other groups. It has nothing to do with theology at all.

Oh, but there is some not-so-great news for "AugustineThomas's" claim that people of faith are just plain better educated:

The study also found a connection between education levels and the number of people who described themselves as having no religious faith, Mr. Hackett said. In the United States, the religious tended to be less educated than the nonreligious, he said.

Mind you, that's only because our schools are immoral pervert factories bent on forcing Americans to become perverted pop-culture consuming leftists.

Anyway, you'll be glad to know that after the banhammer fell, we got a couple of emails from "AugustineThomas," who wanted to let us know our intellectual cowardice had led to Donald Trump's triumph:

We suppose maybe we should be ashamed of ourselves for running away from an argument from a guy who misreads Orwell, draws invalid conclusions from research, makes broad generalizations about those he disagrees with, and then proclaims victory when he's become annoying enough to get thrown out. We're all kinds of choked up about all that.