Deleted Comments: You Think Cultural Marxism Is A Joke?? (Yes. Yes We Do.)

Good Morning Wonketteers! You guys all know the old joke about the guy who had his semicolon removed, right? Now he has to punctuate into a rubber bag. And we think he may have dropped by a couple of Wonkette stories this week, under the all-caps username UR_FREINDLY_NEIGHBORHOOD_TROLL, who popped up on our story about Frank Luntz and his difficulties with basic logic to say

Evan Hurst is a moron,

Frank Luntz has thoughts about the GA-06 special election. They are very bad thoughts.

Bodyguard For 'Alt-Right' Moron Stabbed In Brawl By 'Armenian Gangsters' Who Hate White Dudes. Sure.

'Armenian gangsters' is probably not the next big hit from David Simon.

Now, you might be wondering what was coming next, after the comma, but UFNT was done. We think he might be that guy in the joke, whose condition was so bad that he slipped into a comma. That's just how he ends sentences. Every. Single. Sentence. It's more than a little jarring! Add in a smattering of really sad insults and stupid rightwing slogans, and the whole stew made for a mildly interesting textual train wreck. So, a sampling of UFNT's many, many comments from the thread on Luntz and on the "alt-right" guy who got stabbed after getting into a fight, then blamed "Armenian Terrorists" who hate Donald Trump and supposedly yelled "You’re getting the shank, White Boy!" Also, don't call him a Nazi, because that makes YOU a fan of Joseph Stalin. Also, the Georgia special election proves Donald Trump will rule a thousand years. It's just logic. Or maybe it's just logic,

There was much, much more. Kudos to the Wonker who replied simply, "Whoever taught you English must have really hated it." Maybe they meant the teacher hated the experience, but we're more inclined to think the teacher had a grudge against English that was passed on to UFNT, who has continued their mentor's noble fight against punctuation and making sense. UFNT clearly has an anti-Semantic agenda. Also, shame on the Liberal Idea of Freedom of Thought, which seeks to oppress conservatives by viciously pointing out minor logical incongruities. That's how Stalin got started, you know. Also by forcing punctuation on the Kulaks.

Just to be sure the comma weirdness wasn't something UFNT came up with for us, we checked their comment history, where they do indeed end every comment with a comma, with the exception of a recent comment on a rightwing site where they slipped up and used correct punctuation while ranting about how elitists are using Julius Caesar to call for the assassination of Donald Trump, but when another play featured the stabbing of a Caesar who resembled Barack Obama, nobody thought it was political, because reasons:

Nobody who watched it then interpreted it as anti-Obama.

EVERYBODY - both the lefttard Islamophile moron SJWs from NYC who get triggered by MAGA hats, and American patriots who may not have PhDs in Shakespeare but have IQ above room temperature - correctly sees this iteration as being anti-Trump.

I'm amazed that we have to hammer home this basic point again and again,

Weird, huh? Only used a comma to end the comment, but not at the end of each prior sentence. Which suggests UFNT knows how to end a sentence, but deliberately chooses not to -- or copypasted all but the final sentence from somewhere else. If it's a conscious choice, then maybe UFNT is trying to be the wingnut e.e. cummings. Or maybe it's the ultimate statement of a Man Going His Own Way: He has forsworn any further association with women, including periods.

Since this week's pickin's were a bit thin, we also bring you some deletia from a couple weeks back, when some twit calling himself "The Fathers Initiative" dropped by our story about the poor fired racist Breitbart writer who turned to the internet to ask for help paying her family's medical bills, because apparently there's no "Affordable Care" for her to sign up for. "The Fathers I" was very, very worried about the main threats to American Values: Jews and "Cultural Marxism," which might be the same thing in his head. In any case, he gave us a some stern warnings, including one that had a video link to explain things to us benighted dupes. After somebody made light of his concerns that "Our school students are being subverted by cultural Marxist propaganda. It's a serious concern," TFI gave us some edumacation!

So, you think that Cultural Marxism is a joke ?? We are constantly being told how to think. and, the whole purpose is to corrupt society. Why would you consider that a silly issue? Ironically, they're also using cultural Marxism to radicalize Islam.

Nazis and milk chugging -- two gross things that are even grosser together.

Yep, that's Gavin McInnes, the rightwing loon who co-founded the milk-chugging Proud Boys. He informs us that Cultural Marxists have indeed been brainwashing our innocent children, starting with the "New Math," which we're pretty sure was before his time, but was obviously bad and Marxist and led to Americans not recognizing that one in four Muslims is a likely terrorist or terrorist sympathizer (we tuned out after that, honestly -- maybe you can find other Nuggets O' Brilliance to mock in the comments, which of course we don't allow).

TFI had many other thoughts, most of them very precious, and also he IS NOT an insane Nazi or a Holocaust denier. He's simply learned to think for himself, like all the other freethinkers at American Renaissance:

You know, for a guy who is definitely not a Nazi, he sure does obsess about The Jews a lot. And about how the Holocaust never happened, or might have happened but it was no big deal, or actually the Jews had it coming for creating communism, and the Jews did North Korea and the Cambodian genocide, so don't you go talking to HIM about no "Holocaust."

Poor dude is really worried that he's going to be white genocided by the blacks and Jews, who never contributed anything to America anyhow, as he noted over at white supremacist (oops, now he won't take us seriously) website American Renaissance:

They're never gonna stop. They'll steal our history. They'll claim credit to our inventions. Soon, Blacks will get credit for inventing the automobile, Trains, Airplanes, indoor plumbing, etc. It's scary but true. Even worse is (((who's))) most often behind this rewriting history.

He also wanted to WAKE UP fans of Paul McCartney and warn them that unless they stop the mongrelization of the races, we'll never be able to enjoy Paul McCartney's perfect European-phenotype features in our music again (strangely, he didn't condemn McCartney for playing all that decadent rock and/or roll music with its sinful negroidal rhythms). And yes, this is in response to a post on Paul McCartney's official website offering "colouring in images" for fans to print out and colour in, with crayons or coloured pencils, for Christmas, or Chimney-Sweep-Waxing Day, or whatever they call it in England: 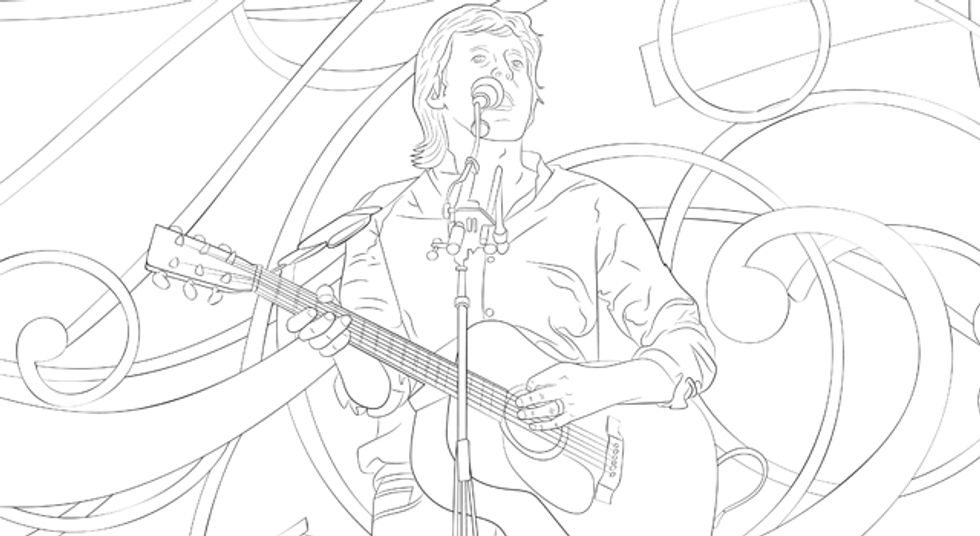 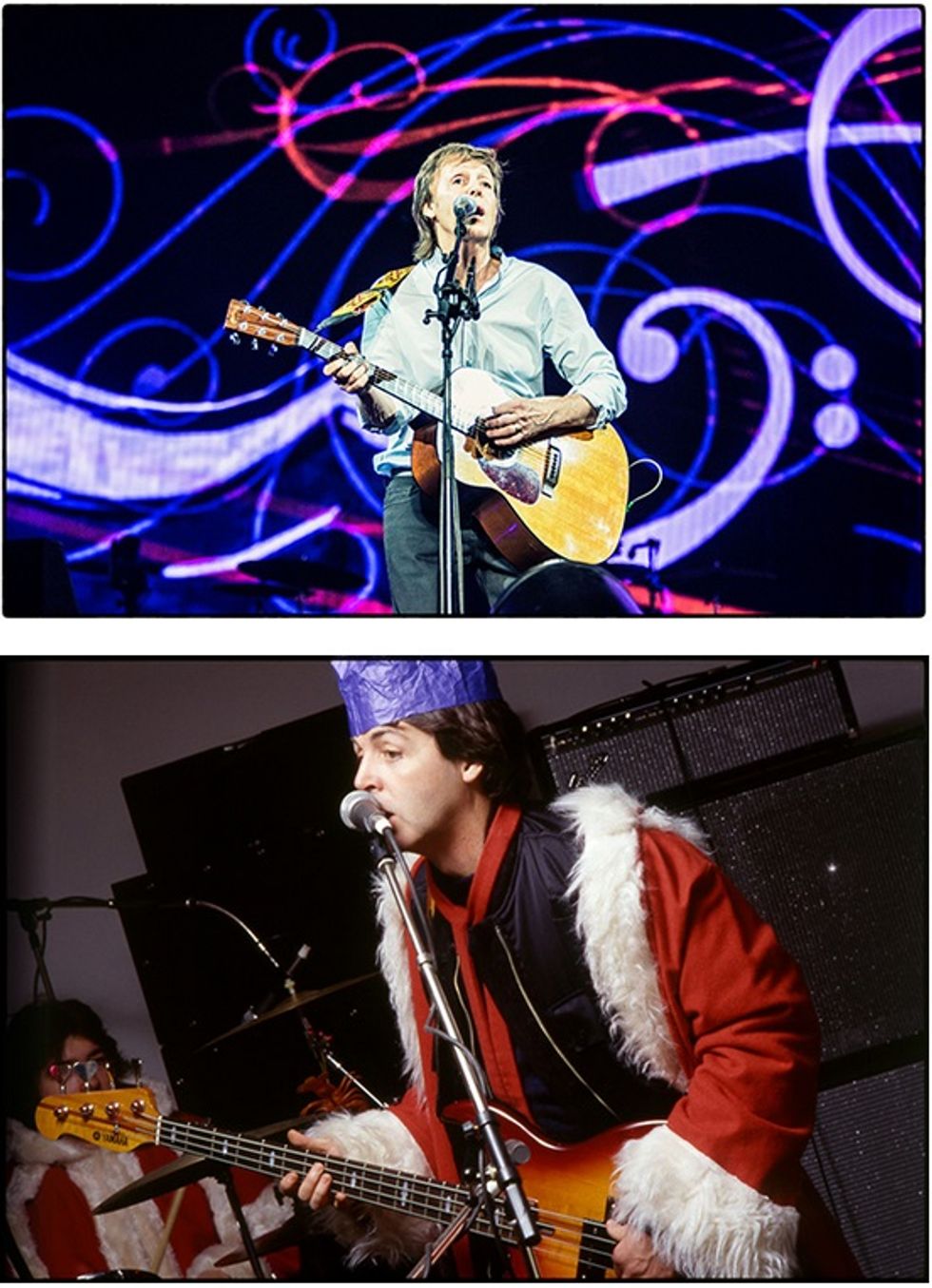 And there's ol' The Fathers Initiative, not being a white supremacist at all:

Okay, let's talk politics. Take a good look at the photographs above. Unless things change, merely 200 years from now, this unique European physical appearance will be erased from the earth. Let's not dismiss the issue. This is why modern day progressives are so dangerous. In January 2017, your buddy OBAMA reconfirmed his ambitions to create a world where European attractiveness is replaced by the 3rd World.

You know, we don't think he wants any coloured pencils at all, and likes the top picture best, because of all the whiteness. Also, we're surprised he wasn't kicked to the kerb. Or made to eat something vegetarian.

Yr Wonkette is supported by reader donations. Please click the "Donate" clicky to help us continue brainwashing America with Cultural Marxism, which is real, dammit, REAL! Whatever it is.

Alan Dershowitz Is Keeping His Panties On For This Impeachment, So Don't Even Bother Asking

Hillary Clinton Fires Up The Great Reliving Of 2016, Because That Sh*t Was Missing For Sure

Say Goodbye To Your Little Friends!