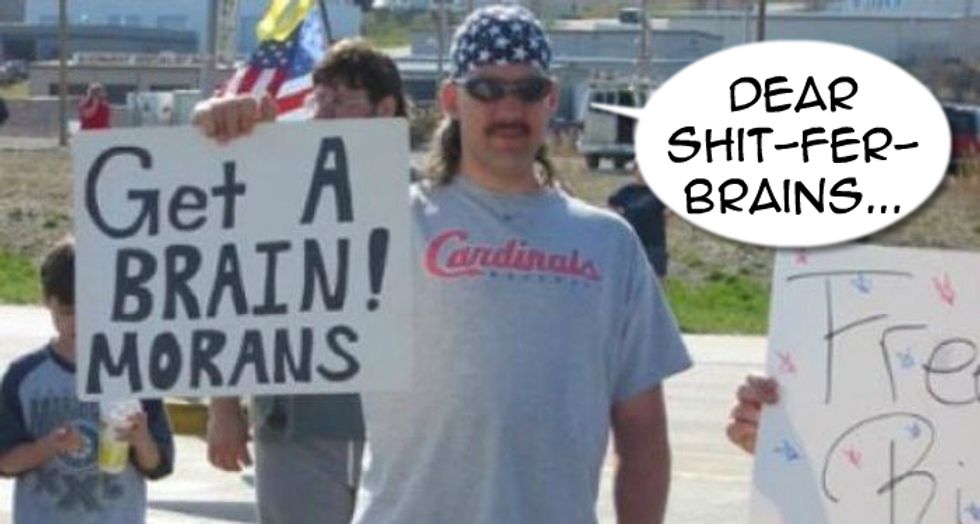 Happy Sportsball Holy Day, Wonkers! May the team from your favored municipality crush the godless heathens of the team from the other municipality! We are rooting for the ridiculously pregnant momcat on the Kitten Academy livesteam, who don't know nothin' 'bout birthin' no kittens. If you don't watch the game, you can spend some time on Kitten Watch.

This week, we've got a very special Almost All Emails edition of Dear Shitferbrains for you. For starters, there's this, from "Greg V.," a man of few words:

Subject: You disgust me!

There's something to be said for conciseness. Perhaps "Greg" will write back to be a little more specific.

Wingnuts anticipating the arrival of the Devin Nunes wet-fart memo were certainly worked up; in advance of the astonishing world-changing revelations that somehow failed to change the world, we got this message from "Laura":

who do you think you are? Muller is nothing but a loser just like Hillary the crook . Why don't you get lost. All they want to do is liar and cheat it is so clear what is going on. Demos mad because Hillary the crook didn't get into office it is all coming out all the lies the FBI committed there will be hell to paid if they try to make up stuff against trump everybody with a brain realizes what is going on with the loser muller

We have to confess that when we clicked on the email in our tips inbox, we were expecting some hot news about the Latter-Day Saints, but instead, it looks like a boring old autocorrect error. Still, style points for the rhythmic development of this brief message, with three brief busts of anger, then the fused "All they want to do is liar and cheat it is so clear what is going on," finally building to that glorious run-on crescendo at the end, by which point "Laura" is too disgusted with us to even bother with punctuation or capital letters. Brava! Truly a tour de derp performance, the textual equivalent of John Belushi's editorial replies. We hope "Laura" didn't hurt herself when she hurled herself off her chair.

"LadyPamela's" Twitter bio, we are sorry to report, does appear to be just a tiny bit trollish. It's got this charming picture commemorating the "Benghazi 4" somehow, with a weird leering Cheshire cat (maybe it's Hillary's familiar? Because she is a witch you know) and this inspiring text:

patriot, God bless the USA! as MLK said, we shall over come! we just have to keep spreading the message! this is the greatest country in the world! #MAGA

Martin Luther King really was all about the triumph of rightwing nationalism, you know. "LadyPamela" says she's from Georgia, which seems quite possible -- not entirely sure if it's the one whose capital is Atlanta or the one whose capital is Tblisi. Account appears to have been created in 2012, so maybe "LadyPamela" really is a good-old-fashioned American wingnut. Most of the content of "her" account appears to be retweets of the craziest crap out there, including these dank memes:

Why yes, that "Anthony Scaramucci" account is fake, what a surprise. Looks like "LadyPamela" just scrapes a ton of rightwing accounts and retweets them, so we suppose we should feel super complimented that we rated an actual reply from the lady "herself." Lucky us!

And now, an abrupt departure from the usual content of this column. In the midst of all the madness flying around this week, Yr Editrix received this email from "TH," and it was a very welcome change from the usual run of derp, particularly after last week's Dear Shitferbrains, which was just kind of depressing. If you don't mind us being sincere for once (don't worry, we won't make a habit of it), we have to say this note couldn't have arrived at a better time for all of us very, very tired mommybloggers here at Yr Wonkette:

You guys do good work; I'm a more-or-less daily reader and I feel I've ridden for free long enough. You could say I used to write for a living (for about 30 years) and I appreciate that cranking this stuff out day in and out without getting stale (or suicidal) ain't easy. I often read the source articles (and other related reporting) and your summaries, while irreverent and entertaining (which, hey, is why we keep reading), as well as necessarily much more succinct, nevertheless rarely omit any relevant fact or interesting nuance. Indeed, it is not uncommon to find them clearer than the underlying reporting, which, struggling for political balance where there is clearly none to be had, sometimes ends up obfuscating the story. I also appreciate the journalistic ethics on display, it is an extremely rare occurrence for me to read an article of yours and consider the actual reporting to be unfairly presented (whether by omission or otherwise). Too bad the same cannot be said of late of some of the national publications (Did somebody recently de-bone the NYT editorial staff? Some sort of Thanksgiving group turkey-carving accident? WTF? I expect to see a daily first section double page ad for Brawny paper towels at any second.)

Finally, the excellent bullshit detection (from all quarters, you obviously have a well-stocked Rolodex) displayed by your good selves over the years deserves special mention. When something weird breaks, I often find myself waiting for you guys to write it up to see whether you think it's bullshit or not, can't say I ever remember you being wrong.

As Evan said when Rebecca posted that in the Wonkette Sekrit ChatCave, "That's what I call a "refueling" letter, the ones I need to read when I'm about to break all the things."

Agreed! Thank you, "TH," and thanks for the donation, too (see what we did there? We're pretty damn subtle). It's always nice to know our efforts are appreciated, especially that stuff about our alleged ethics -- it's gratifying to know people notice that even though we're filthy, we're honest.

Have a great week, kids, and we'll keep bringing you the best juvenile humor, fart noises, random Catch-22 references, and gratuitous ponies you can get with your daily dose of news here in Stupid Hell. Wonkette: Your home for fact-checked dick jokes.

Help him. Help the bombardier!