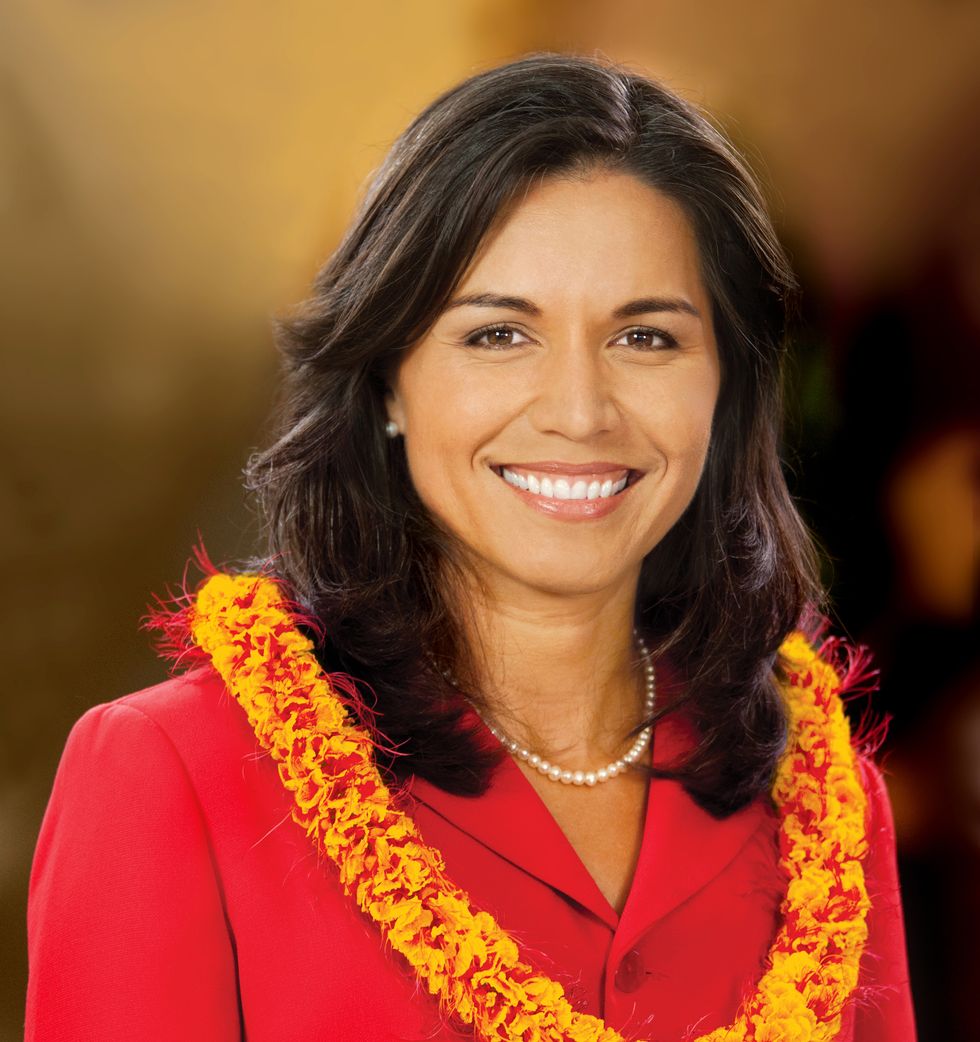 We need to talk about populism, and identity politics, and Bernie Sanders and Tulsi Gabbard. Does that mean you get to go hogwild in the comments? It does not. We have stopped the fighting, and the fingerpointing blame-gaming, OR ELSE.

But this is dismaying:

Tulsi Gabbard is willing to go out on a limb.

Gabbard met with Trump and Vice President-elect Mike Pence on Monday morning, but Trump spokesman Jason Miller said it was “premature” to discuss Gabbard’s potential role in the Trump administration.

Others are reporting the potential job may be Ambassador to the UN. So ... better than John Bolton, we guess?

Meanwhile, Bernie Sanders gave a speech yesterday in Boston in which he said the following:

We've all had a swell time (in OPPOSITE LAND) debating "populism vs. identity politics" on the Internets the past 10ish days. And I think Bernie Sanders is wrong. Of course Democrats should embrace the working class -- and they do. They always have. To say they don't is a blood libel and a shanda.

(Democrats have, in the form of Joe Biden, written shitty bankruptcy bills. And they should be ashamed of that. So let's mark that as like 1 percent of the shitty things the two major political parties have done to the working class.)

But Democrats have also (at least in the modern era) always stood as the champion of expanding rights -- for women, and black people, and immigrants and the LGBQTMORELETTERS. And to brush that aside as a sort of afterthought? As something that isn't quite as important as hugging white dudes in Pennsylvania to our bosoms and whispering in their ear that they're the real Americans?

Thanks to Democrats' "newfound" love for populism, Senate Minority Leader Chuck Schumer's put Joe Manchin in Senate Democratic leadership. Joe Manchin just said Trump's attorney general nominee, Jeff Sessions -- who was deemed too racist by Republicans for a federal judgeship, in the '80s -- isn't racist at all and would make a fine AG.

When Bernie Sanders says it's not enough to say "I'm a woman, vote for me," I hear a nicer version of what we heard so much from his supporters during the primary: STOP VOTING WITH YOUR VAGINA. If Democratic women voted with their vagina? We all would have crossed over to vote for Libby Dole way back when, or for Carly Fiorina this time. It's a slander.

Thank you, and also no thank you!

What Sanders is essentially saying is that women and black people and Messicans and Muslims need to stop their bitching. He'll be the first to help us toward pay equity (I think!) but all that other stuff -- tiny little issues with criminal justice, or trying to stop the 92 gun deaths in America each day, or disliking being grabbed right by the pussy, is non-essential.

Well, they had economic populism in Germany, before the war. You got five hundred clams for having a baby for the motherland! You got a paid yearly vacation, to the mountains or the sea! It didn't work out so hot for everybody but it worked out for some, for a while.

Working with Trump for "populism" is no different at all.

Thanks to McClatchy, I learned that Gabbard (whom I had known only as a very lovely new representative and an out-loud Bernie supporter who quit the DNC, because Debbie Wasserman-Schultz is THE WORST -- and we all agree!) has voted with Republicans on gun control, and gone on Fox a bunch of times to bitch that Barack Obama won't say "radical Islamic terrorism." I'm all for a big tent for the Democratic Party; I think many of our conservative Democrats probably used to be Republicans before the GOP went bugfuck nuts, and I'd rather have those dickwads voting with us than with Paul Ryan. But for me, personally, gun control (got a domestic violence conviction? YES I WANT TO TAKE YOUR GUNS) and not being an idiot going along with made-up jerkoff arguments about Muslims are more important than "Hillary Clinton got money from Wall Street."

You know. Just me personally.

Now no being bitchy in the comments. OR ELSE.