Democrats Agree: Nobody Gives A Damn About Hillary's Sextghazi Emails 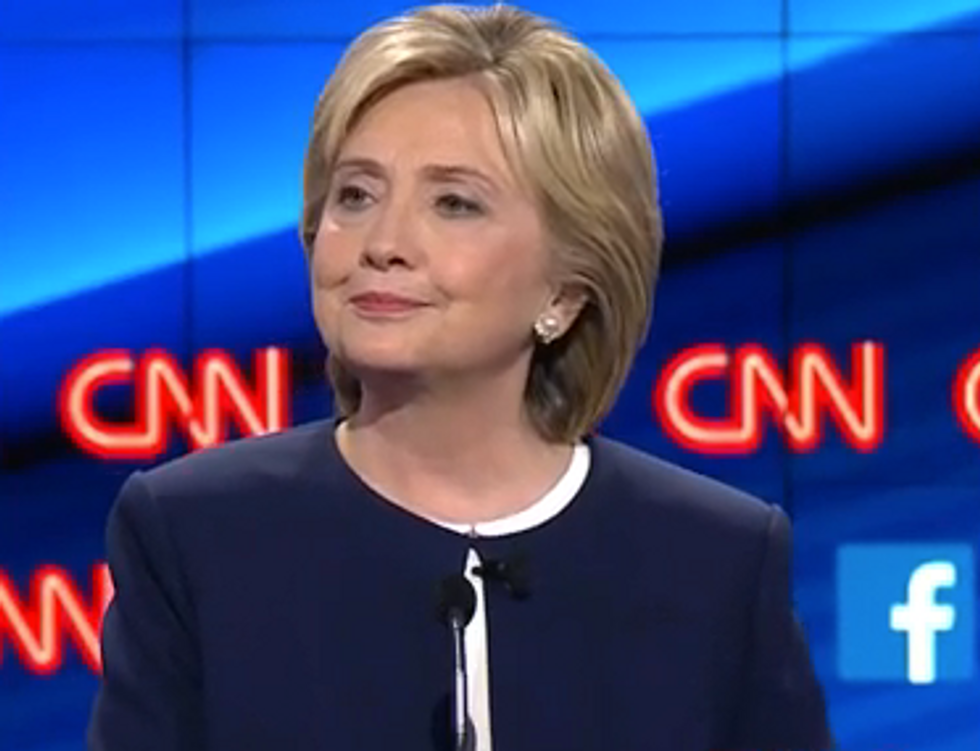 Guys, remember the Democratic debate on Tuesday night? You know, the one you missed because you were busy watching the Mets lose? Well, you can read all about it here, but spoiler: It was awesome. Two Democrats, a socialist, a bicurious dude from Rhode Island, and dickbag Jim Webb stood on a stage and delivered coherent thoughts, in complete sentences, and not one of them, not a single time, cried about the sharia threat of teenage Muslim science nerds, or whipped out their dicks to prove how much they will bomb Iran, or vowed to straight-marry Kim Davis as soon as she has an opening, or shook their angry fists of fury about BABY PARTS!!!!1!, all of which, to this idiot, Gov. Bobby Jindal, that was a bad thing:

But, like we said, idiot. And the one phrase he's never going to hear? President Bobby Jindal. Zing. Snap.

We had so many favorite parts, like, OH ALL OF EM, KATIE. But here was a mighty fine good one, where Bernie Sanders declared that no one in Real U.S. America gives a lukewarm damn about Hillary Clinton's emailghazigate. The only people who care are congressional Republicans and the GOP candidates competing to have Hillz kick their precious pink assholes in the general election. And, contrary to claims that the secrets of how FOUR AMERICANS died in Benghazi are buried within Hillary's emails, everyone knows -- because, conveniently, House Majority Leader Kevin McCarthy recently told us -- the entire "Benghazi" investigation in Congress is really about trying to stop Hillary from becoming president. No fricking duh.

Given the opportunity to tap dance all over Hillz and say things like "Typical Clinton" and "What is she hiding?" and "This is why she's untrustworthy," and all those things the Very Serious Pundits insist Very Serious Democrats lose sleep over, Bernie Sanders instead said what we're all thinking: No one fucking cares.

BERNIE: Let me say something that may not be great politics, but I think the secretary is right. And that is that the American people are sick and tired of hearing about your DAMN EMAILS!

BERNIE: And let me say something about the media as well. I go around the country, talk to a whole lot of people. The middle class of this country is collapsing. We have 27 million people living in poverty. We have massive wealth and income inequality. Our trade policies have cost us millions of decent jobs. The American people want to know whether we're going to have a democracy or an oligarchy, as a result of Citizens United.

Enough of the emails. Let's talk about the real issues facing America.

HILLZ: Thank you, Bernie. Thank you.

And then the already cheering audience rose to its feet and gave Bernz a standing ovation, for speaking The Truth, and also for being a classy mensch of a guy and defending Hillary Clinton, even though they are running against each other, almost like he is a grown-up who is willing to put principles above politics, WEIRD. No wonder Jindal and the rest of the Republicans were so befuddled by the whole thing.

Naturally, debate moderate Anderson Cooper -- remember how we told you before the debate that Cooper claimed he's "uncomfortable with that notion of setting people up in order to kind of promote some sort of a face-off" -- tried to, you know, do that. Because, come on. Hillary Clinton's emails will be her undoing. Hillary Clinton's emails are why anonymous Democrats are suggesting Joe Biden should jump into the race. Or maybe John Kerry. Or Al Gore. Or, oh jeez, anyone please, (anyone with a penis, that is) to save us from the disaster of inevitably uncovering the Clinton "Yes, I did Benghazi and 9/11 too, suck it America!" emails that must exist.

COOPER: I know that plays well in this room, but I gotta be honest. Gov. Chafee, for the record, on the campaign trail, you've said a different thing. You said this is a huge issue. Standing here in front of Secretary Clinton, are you willing to say that to her face?

CHAFEE: Absolutely. We have to repair American credibility, after we told the world that Saddam Hussein had weapons of mass destruction, which he didn't. So there's an issue of American credibility out there. So any time someone's running to be our leader, and a world leader, which the American president is, credibility is an issue. Out there with the world. And we have repair work to be done. I think we need someone that has the best in ethical standards as our next president. That's how I feel.

COOPER: Secretary Clinton, did you want to respond?

And the crowd goes wild again. And the message is pretty crystal mofo-ing clear: Republicans and the New York Times can ALL CAPS EXCLAMATION POINT about Hillary's emails all day long, but her Democratic rivals (except for maybe former Republican Lincoln Chafee, but he doesn't count) aren't going to attack her on petty hyped up bullcrap that doesn't matter to the American people. Isn't it so refreshing to watch some actual grown-ups run for president?