Democrats Hope To Wash Away Corporate Sleazebag In Iowa's 1st. 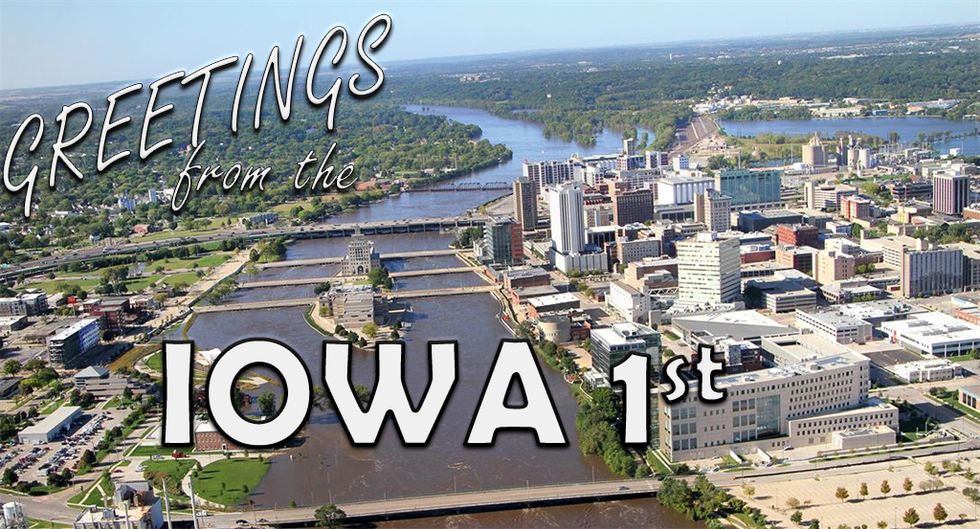 Iowa is divided into four haphazard corners, with the First resting in the northeastern quadrant. It's littered with random bits of forgotten midwestern Americana like "Snake Alley," baseball legends, the Decorah crater, and the hills of Dubuque. Most of the places not already claimed by Native Americans seem to have been named by unimaginative pioneers who stuck "city" or "town" at the end of a noun.

The many, many white people live in one of three small cities, the largest being Cedar Rapids. A smattering of small colleges and universities disproportionately skew a majority of the population so that all the tiny towns and hamlets and farms are full of middle aged folks and retirees. A number of cities have seen a fair amount of growth over the last decade, that means there's construction jobs, and careers in education or healthcare helping to reinforce the traditional blue collar manufacturing sector. Full and part time gigs in retail and food service fill in the rest of the gaps, leaving a median income around $57,000.

Charts and Graphs via Statistical Atlas and US Census

The 1st is currently Rep'd by Tea Party crank Rod Blum. He's only been in office since 2015, and currently sits on the committees for Oversight and Small Business. As a member of the House Freedom Caucus, he's swaddled Trump and other conservative fever dreams at every opportunity, voting to kill the ACA, repeal regulations on the financial industry, abortion, education, consumer protections, workers rights and benefits, the environment, SNAP, even regulations on regulations. Blum has also voted in favor of expanding concealed carry laws, the Muslim banstrict limits on immigration, and voted against disaster relief for Puerto Rico.

Last year Blum had several disastrous town halls over his support for the legislative failure known as Trumpcare. Shortly before a townhall where Blum pre-screened constituents to make sure they weren't being bussed in from Des Moines or Chicago, Blum walked out of an interview with a local news crew and whined about being badgered over contributions from shady PACs and corporate lobbyists.

Over the last several weeks Blum has been wiping the sweat from his brow when dodging reporters and posting selfies after Roll Call named him the most vulnerable House member. The DCCC has also targeted the 1st for its Red to Blue program, and Blum's rising unpopularity has caused all the political fortune tellers to shift the race into "toss-up" territory.

Most small business owners can't afford to close up shop for fancy brunch on a weekday...

There's currently four Democrats challenging Blum, but state Rep. Abby Finkenauer is the clear frontrunner. Aside from being tapped for the DCCC Red to Blue program, she's been raking in endorsements from Emily's List, NARAL Pro-Choice America, Planned Parenthood, AFSCME, IBEW, the Teamsters, and a deluge of local unions and legislators. She's even got the support from California Rep. Eric Swalwell and Joe Biden.

Finkenauer has staked her platform on improving the day to day life for average folks, that means modern roads, dams, and broadband access for main streets, manufacturers and farmers. Coming from a union family, she wants more rights for workers, paid family leave, equal pay, and a living wage tied to inflation. A millennial, Finkenauer advocates for for women and students who are trying to shatter glass ceilings and overcome student loan debt while protecting benefits for senior citizens. At only 28, Finkenauer would be the youngest member of congress ever, if elected.

Most political rags think that her main primary opponent is Thomas Heckworth, a businessman with hands-on experience doing the low-level scut work that actually keeps government running. Heckworth served as an aide to former Iowa Democratic Sen. Tom Harkin, and worked in the Labor Department under Obama as deputy chief of staff of International Affairs. Heckworth later moved to New York to oversee sustainable business practices for a children's clothing company.

Heckworth has centered his campaign around a $15 minimum wage, healthcare access, infrastructure, a robust social safety net, and a host of other issues, including rural development, and fighting cuts to Social Security. Rather than gunning for big names, Heckworth has a sizeable list of endorsements from a number of current and former local legislators.

Also in the race are George Ramsey, who spent 24 years in active duty for the Army as a combat engineer and oversaw recruitment in Northern Iowa, and aeronautical and astronautical engineer Courtney Rowe.

Tuesday's primary will ultimately come down Heckroth and Finkenauer. Finkenauer has consistently polled higher than the other three candidates, but a March poll showed Ramsey two points ahead of Heckroth despite Ramsey's modest fundraising. Finkenauer has an insurmountable fundraising lead thanks to a lot of small donors and union support. If she wins, she's going to need all that money (and more) since Blum takes money from just about every conservative PAC and corporate lobby in existence. He currently has over a million dollars in cash according to the most recent FEC reports.

It's no wonder Blum doesn't like questions about his money. This isn't even the first page!

It's important to note that Democrats in Iowa need 35 percent of the primary vote to lock in their party nomination. If nobody secures a majority on Tuesday then candidates have to court delegates at the state convention, a potentially costly and time consuming process. This is likely why Heckroth has been needling Finkenauer in the last few weeks with false accusations about her position on the minimum wage. Without getting nerdy, just know that it's a dick move: policy wonks and economists love to argue about the effects of inflation adjusted rates versus flat rate increases in rural America.

With just under half a million voters in the Iowa 1st, 156,594 thousand of those are Democrats. A comparison of voter registration totals from January to June shows a surge in voter registration for Democrats, despite a number of voters being listed as inactive. A similar increase in early voting suggests that Democrats are taking a lead ahead of November, however Iowa does has voter ID laws that could gum up tallies on election night.

Blum barely won his first election in 2014 by less than three points, but he did manage a seven point win in 2016. There's parts of the 1st that swung in the double digits for both Trump and Obama in the last three presidential elections over promises to increase stagnant wages. Blum's alienation of voters and brutally partisan record isn't likely to be a campaign theme, but you can bet on his cozy relationship insurance companies, big pharma and his attempt to kill Obamacare will. Many voters have spent the last year criticizing his absence at home, and in an area of blue collar voters who want an honest wage, simply showing up to work is part of the job.

[Donate to Abby Finkenauer!] or [Donate to Thomas Heckroth!]

Wonkette is 100% ad-free and reader supported! We don't get cash from big pharma or corporate PACs, so for the love of coffee, throw us some money!